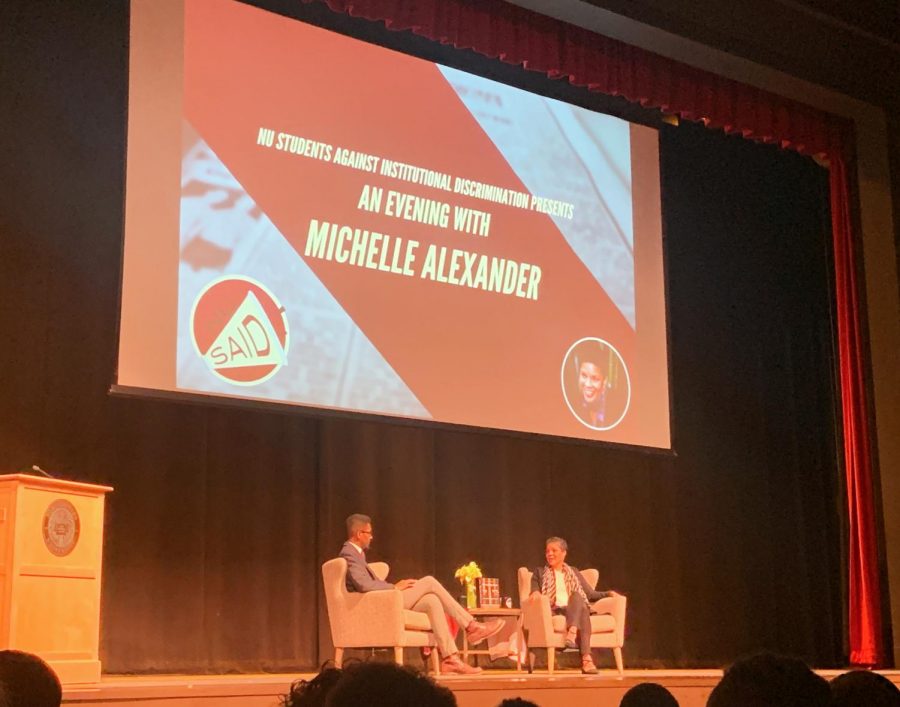 Highly acclaimed civil rights lawyer, advocate and legal scholar Michelle Alexander came to Northeastern on Feb. 20 to discuss the content of her book, “The New Jim Crow: Mass Incarceration in the Age of Colorblindness.” The award-winning book has been featured for over  250 weeks on the New York Times Best-Seller List, and is celebrating its tenth year of publication.

Alexander’s event was a part of the Students Against Institutional Discrimination, or SAID, speaker series. SAID invites “luminaries, change-seekers and process-makers” to share their stories and wisdom, according to Associate Director Janelle Robinson during her welcome speech.

The Director of SAID, Charles Wallace-Thomas IV, was on stage along with Alexander, asking specific questions about her book as well as her thoughts on other issues such as prison abolition and her stance on the Israeli-Palestinian conflict.

“The New Jim Crow” champions the idea of how the modern civil rights community should place mass incarceration of African-Americans at the forefront of the movement. In the book, Alexander challenges the idea that the United States has “triumphed over race,” which many believed following the election of former President Barack Obama.

However, she argues that there has been a rebirth of a caste-like system by which the U.S. criminal justice system functions as a system of racial control — one that puts African-Americans behind bars and subjects them to permanent second-class status.

Alexander began the evening by telling the story of a particular moment in her career as a civil rights lawyer that left a profound impact on her, and in-part inspired her to write this book.

Alexander was working on an awareness campaign for racial profiling cases named “Driving While Black” in Oakland, California The campaign set up a hotline for people who felt they were victims of racial profiling.

One day, a young man walked into Alexander’s office with a stack of papers that were his long, detailed notes of his encounters with Oakland police: dates, times, descriptions of the scene, names of witnesses, police officers’ names and even some badge numbers.

“This young man is attractive, personable and well-spoken. He’ll do well in front of a jury and to the media. He’s my dream plaintiff,” Alexander said she recounts thinking to herself.

However, this young man soon revealed something to Alexander that would change everything: he had a felony record.

He believed the police had planted drugs on him, giving her the name of the police officer he believed was responsible. He explained to her that he pleaded guilty because he wouldn’t have to serve time.

Alexander said she proceeded to apologize to the young man, telling him that she simply could not represent him.

At this point, Alexander said the young man became enraged and said, “Good luck finding one black man in my neighborhood that [the police] haven’t gotten to yet. You’re no better than them.”

She said he then picked up his stack of papers, and stormed out of her office.

A few months after this encounter, Alexander saw that a news story had broken that exposed members of an Oakland drug task force planting drugs and wrongfully arresting them and committing acts of police brutality.

Alexander recognized one of the names of an offending officer; it was the officer that the young man in her office had brought to her attention so many months before. It was at this point when Alexander realized that she was part of the problem she was so desperately trying to fight against.

She said she realized that she was constantly finding herself in spaces where people were asking themselves and each other questions like, “Should we sentence this person to seven or 15 years?” Rather, she believed there were many more important questions to ask such as, “What does it mean to do justice?”

Alexander brought such issues to light during her talk.

“[Wallace-Thomas] asked smart and diverse questions,” said Olivia Harris, a senior political science and human services major. “[Alexander] talked about so much more than just policy, but also about social and political values and economic systems that are embedded in the way we structure our criminal justice system.”

Alexander ended the night by broadening the discussion from focusing on the United States to having a more global perspective on issues of racial and social inequality.

Alexander said she remembers when Michael Brown Jr. was fatally shot by a Ferguson, Missouri. police officer in 2015, many activists from Palestine were tweeting at protestors in Ferguson, giving advice on things such as how to deal with tear gas and how to emotionally and physically react when police officers are stationed in vehicles in the streets.

Alexander urged the audience to embody the spirit of internationalism; to support people of color all over the globe who are struggling for their own freedoms.

“It’s important for people in the United States to embrace the sense of being a part of a global movement for racial, social, economic and political justice for all,” Alexander said. “If history has taught us anything, the cycle of racial and social control systems will not break until we wake up to the dignity and value of everyone: including, and especially, those who have been cast out of society’s inner circle.”

After the official event, there was a reception for a select few where attendees could get their books signed and briefly speak to Alexander. Wallace-Thomas noticed that many people had similar things to say to her.

“Person after person was saying things like ‘Thank you, seeing you meant so much to me, your book meant so much to me. I felt heard. I felt advocated for. I felt challenged,’” Wallace-Thomas said. “These are the moments that remind me of the joy and reward of being an activist and organizing events like these.”