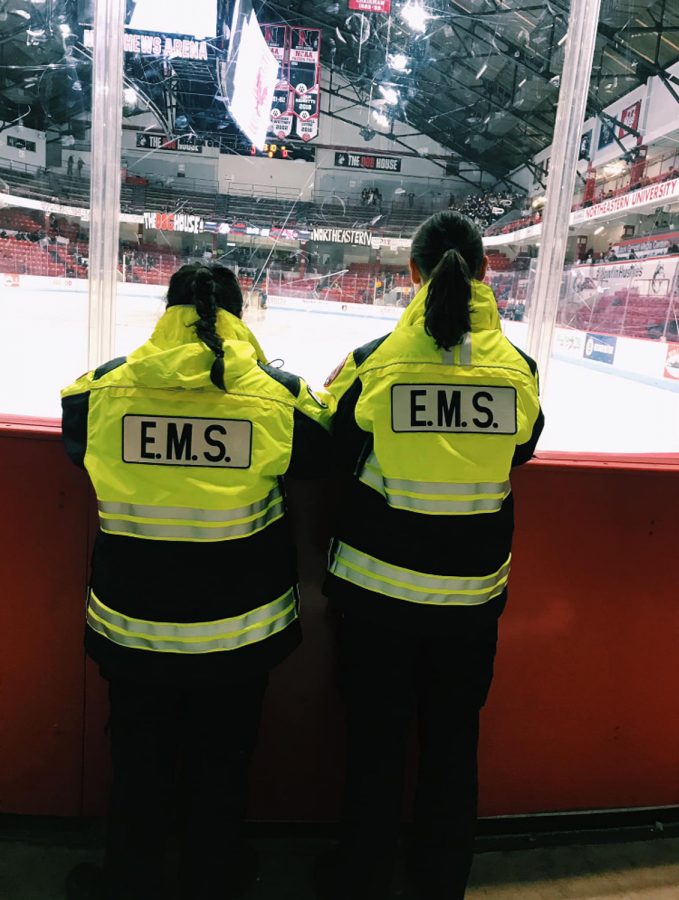 A major aspect of the NUEMS mission is the education of its members and the larger community.

The Northeastern University Emergency Medical Services club, or NUEMS, provides medical detail at campus events and hosts numerous educational programs, but they are looking to do more.

The group is in the process of starting new initiatives, such as obtaining an ambulance through collaboration with Armstrong Ambulance to be based on campus and run by student members. They predict the service will begin by the end of this school year, CPR coordinator and fifth-year health science and public health graduate student Vivian Wilt said in an email to The News.

Currently, the group’s Emergency Medical Technicians, or EMTs, staff Northeastern hockey and basketball games, as well as Springfest and Homecoming events, using an Armstrong Ambulance. The student EMTs treat patients using a stretcher and basic equipment, bringing them to the ambulance if they need transportation to a hospital.

“If anyone in the area has a medical emergency, then we’ll treat them,” said the club’s training officer Sam Reichgut, a third-year behavioral neuroscience major. “At hockey games, more often than not, nothing happens, but for Spring Fest, we’ll get a few calls.”

She recalled treating a patient who was hit with a hockey puck at Matthews Arena.

Another sign of NUEMS’s growth is its recent HeartSafe Community distinction through the Massachusetts Department of Public Health. According to the application form for the distinction, communities qualify based on a variety of factors, including the number of CPR training classes they offer, whether they have updated equipment and the quality of their process to treat cardiac arrest.

“What it means is that a large portion of the community is knowledgeable on how to react and respond to cardiac arrest. So that’s pretty major,” Wilt said about the distinction.

Less than 1,000 communities have been awarded the HeartSafe distinction nationwide. NUEMS is also applying for the HeartSafe Campus distinction through the National Collegiate Emergency Medical Services Foundation.

Part of how NUEMS qualifies for this distinction is through their CPR certification classes, which are taught by students. In the past, classes were bi-weekly and typically certified over 500 students each year, according to Wilt. Now, they are offered three times per week in Behrakis Health Sciences Center, likely increasing their annual total of people certified.

Most students take the class for clinical co-op preparation, but they are open to anyone in the area, Wilt said. In addition to their typical classes, NUEMS arranges private training for student groups or offices on campuses. They are also planning an annual mass CPR event, in which they will certify over a hundred people in a single day.

“Seeing the number of students that we certify with our CPR classes, hearing back from them how much they enjoyed our classes and how they’ve utilized their skills while on co-op or while working and offering the cheapest CPR classes in the area: For me personally, that’s very rewarding,” Wilt said.

This year, NUEMS has also become involved in the Stop the Bleed Campaign, a Department of Homeland Security effort to train bystanders to step in during a bleeding emergency before professional help arrives.

“It’s really important for laypeople to be able to help before EMS arrives, because someone could bleed out in a matter of minutes when sometimes it takes up to ten minutes for an ambulance to arrive,” said NUEMS Co-President Jazlyn Seidel, a fourth-year cell and molecular biology major.

Using funds from the Student Activity Fee, the group purchased 25 bleeding control kits and will place them in automated external defibrillators around campus. They have already begun teaching bleeding control classes on campus, instructing students on how to utilize the kits in an emergency situation.

A major aspect of the NUEMS mission is the education of its members and the larger community. The club holds a weekly training run by the two training officers or a guest lecturer. Each training focuses on a different topic and incorporates hands-on skills. Some past examples include training for neurological emergencies, cardiological emergencies and serving vulnerable populations, Reichgut said.

All of these courses help members that are EMTs maintain their license. Every two years, EMTs are required to take continuing education courses to renew their licenses. NUEMS courses are certified and thus count for this course credit. For the first time this year, they also offered a National Continued Competency Requirements course, which is another requirement for EMTs to recertify.

“Most places charge a lot of money to take it, but we basically ran it over a weekend and made it available to students both in cost and location,” Seidel said. “So it was a really big deal that we held that this year.”

Another educational opportunity NUEMS offers its members involves the Simulation Lab in Behrakis Center. The club’s faculty advisor, Jamie Musler, is the director of the Simulation Lab. The NUEMS e-board creates a simulation for members to participate in and receive feedback on their performance from the lab’s staff.

The club has 60 to 80 members, according to Reichgut, although not all are certified EMTs. The club is open to anyone, regardless of their certifications or lack thereof. Members do have to be EMTs to serve as a medical standby at Northeastern events, although those with only a CPR certification can shadow them.

“We really want to be a community to everyone who is interested in EMS or healthcare,” Seidel said. “We really just want to foster an environment of helping each other and learning about EMS.”

“With the opportunities that are available to members, especially leadership positions, you learn so much about EMS, how to be a leader and how to make a real impact on our community,” Wilt said. “I feel like we’re one of the few clubs that can say that we truly make an impact on the Northeastern community and Boston.”