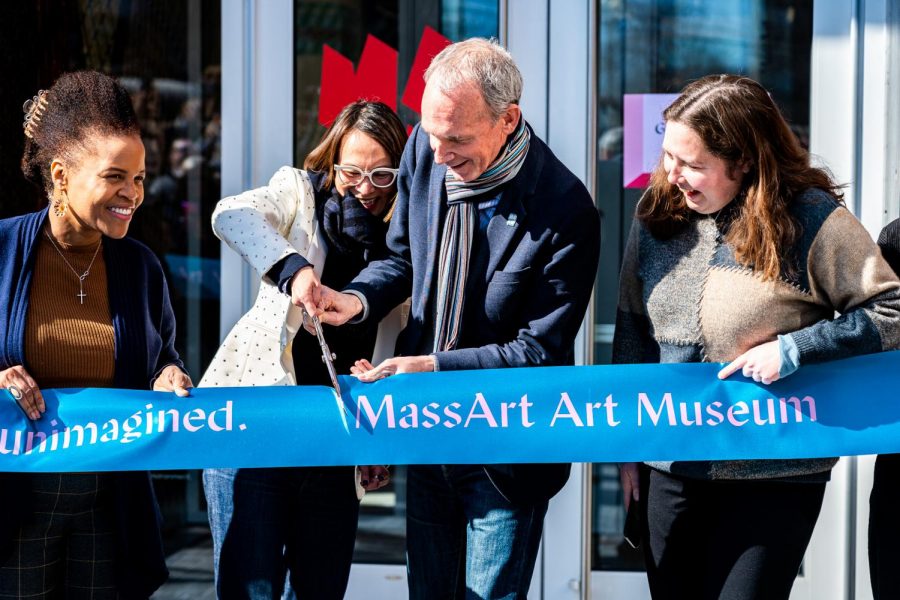 The MassArt Museum held its grand opening on Feb. 22.

On Feb. 22, Massachusetts College of Art and Design cut the ribbon and unveiled its galleries at the grand opening of its new community museum, the MassArt Museum, providing a space for free community art in the city of Boston.

MassArt students and faculty, along with community supporters, were joined on Saturday afternoon by MassArt president David Nelson, president of Boston City Council Kim Janey and District 8 representative Kenzie Bok for the grand opening of the new museum, nicknamed MAAM.

Both Janey and Bok spoke to the opening day crowd about their love for the arts and the importance that the museum held in their own lives as well as in the community. Janey, the first woman elected to represent district 7 before assuming the position of president of Boston City Council, expressed her excitement at cultivating the arts in the Boston community.

The museum was built to be able to provide free art for the entire city of Boston and beyond. Among the many mantras of the museum are “See to learn. Learn to see” and “Imagine the unimaginable.” Nelson described the opening as “throwing open the doors of imagination.”

MAAM holds true to those mantras, promoting participatory experiences and community appreciation of art. The “Game Changers” exhibit, displayed in an open and interactive floor plan, provides art in a new and reimagined way. It features pieces of contemporary art paired with games designed to allow the viewers to immerse themselves within a new technology-driven type of art.

The museum’s “Valkyrie Mumbet” exhibit by Portuguese artist Joana Vasconcelos, highlights the life of Elizabeth “Mumbet” Freeman. With her first solo exhibit in the United States, Vasconcelos uses a variety of materials and patterns to represent the strength of Mumbet, an enslaved woman in 1781. Mumbet’s efforts in court helped make slavery illegal in Massachusetts.

MAAM opened another exhibit entitled “Ghost of a Dream,” a project made up of 30 years of exhibition catalogs that are pasted together in a patterned design, on Saturday Feb. 22 that will run until Feb. 28.

The new MassArt museum is a way to bring together people in the community and to cultivate imagination by involving viewers in the creation of contemporary art.