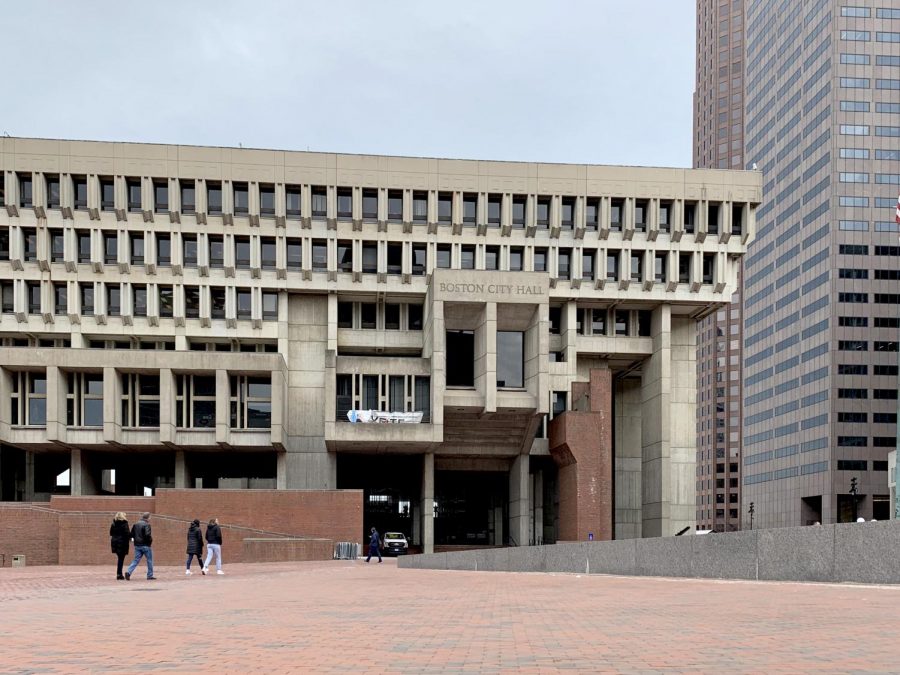 The city of Boston plans to renovate City Hall Plaza in the Government Center area of the city. These renovations, announced in June, are the first phase of a larger, 30-year master plan, resulting from Rethink City Hall: Boston City Hall & Plaza Master Plan, a study by Boston-based design firm Utile and Reed Hilderbrand landscape architects.

“Boston City Hall Plaza has long been Boston’s place to gather, celebrate and make residents’ voices heard,” said Kate Tooke, landscape architect at Sasaki, in the city’s announcement. “This historic Plaza recently celebrated its 50th anniversary and these updates will bring the Plaza into the modern century with improved infrastructure, sustainability and public spaces.”

The renovations include connecting Congress and Chamber streets with a gently sloped walkway for accessibility, while 3,000 new seating options, 12,000 square feet of playspace and 11,000 square feet of terraces for “pop-up play and interactive public art” aim to increase public engagement in what has been coined the “People’s Plaza.”

The plaza will be able to accomodate events with upwards of 20,000 people while also allowing for smaller gathering spaces. A new building on Congress Street will include bathrooms and other public facilities.

The mayor’s office hopes to devote additional resources to making Boston more sustainable and resilient in the face of severe weather. Part of the plaza renovations will include an increase in permeable surfaces, 100 new trees, the replacement of lights with LED alternatives and the recycling of 22,500 feet of paving.

The budget for this project falls under the $2.78 billion Capital Budget Plan, announced earlier this year, which comprises funding for over 300 projects to improve Boston’s infrastructure, including housing in Charlestown, updated transportation in the Allston-Brighton area and city-wide improvements to public schools. About $70 million of the budget will go to this phase of plaza renovations.

The original plans for City Hall Plaza were created by Edward J. Logue, an urban planner with the rebuilding of New Haven’s downtown under his belt. Logue was hired by newly elected Mayor John Collins in 1960 to head the Boston Redevelopment Authority. With a grand vision for a “New Boston” and no staff of his own, Logue hired architects Henry N. Cobb and I. M. Pei to assist.

The centerpiece of the Downtown North General Neighborhood Renewal Plan was Government Center, a 50-acre plot concentrating city, state and federal facilities. The nearly 22 streets that made up the historic Scollay Square were demolished and replaced by plots of much larger size, intersected with three major arteries.

In his book “Words & Works,” Cobb reflects that the “features of the Government Center plan that made it politically and economically viable were precisely those that have made its realization in built form so problematic.”

The project was a huge, fast-paced interference in the city. “Boston had evolved very incrementally up until that point, and now suddenly, there was a rip in the historical fabric,” said George Thrush, professor of architecture at Northeastern. Current master planning efforts take a slower, long-term approach.

The marriage between “old Boston” — the colonial brick structures and historic sites — and the “new Boston” was at the cornerstone of the Government Center plan. But the massive concrete buildings would not represent “new” for very long.

“This was seen as an absolutely groundbreaking, forward looking thing, but it only had a very short moment in the sun,” said Thrush. “It developed a very poor reputation in the general public.”

Meredith Bloomquist, a 37-year-old IT worker in Boston, and her dog, Rocky, frequent the plaza. Rocky, happily off-leash, chased a ball Meredith threw around the empty brick field.

“I’m able to bring him here because there’s so much space and not a lot of people around. I don’t see dogs here often. It gives me more freedom. He’s not about to run into the street,” she said.

Bloomquist and Rocky’s pocket of brick is towards the back of the plaza, beside the sparse, barren, row of trees and concrete park benches. Here, they feel detached from the bustle of the city. But things could be better.

“I definitely want more green,” Bloomquist said. “It’s such an expansive space, but, like, what the hell is this? It’s an expanse of brick.”

The current plans for City Hall Plaza focus on adding park-like elements: playgrounds, sitting areas, canopies. Cobb and Pei’s original vision for the space, detailed in their testimony to Boston City Council in June 1963, was not a cold, institutional, paved expanse — but a “quiet lawn.”

Much of the public criticism is aimed at the focal point of the Plaza: the City Hall building.

“I’d sure love to see them improve City Hall,” said Paul Myette, a 44-year-old teacher in North Andover. Myette and his son were in Boston for the day, visiting the Sports Museum. “I’ve just never felt it fit with the historic character of the city.” His son interjected, “I think it’s cool.”

Boston’s City Hall, by architects Kallman, McKinnell and Knowles in 1969, was to represent a future for the city. The building was a vision of great significance and grandeur in the heart of Boston, which was, at the time, a city in decline. It has, however, long been considered a bleak, rather dystopian projection of Boston’s future. A sculptural, expressive structure of concrete, it sits undeniably, as a fortress in its urban context. Free of ornament or paint, it can be found — at least by modern sensibilities — ugly.

“It has just never felt welcoming or inviting,” Myette said. “It seems like a good place to run from.”

Mark Pasnik, architect and author of “Heroic: Concrete Architecture and the New Boston,” finds problems with this line of thinking.

“There’s been an impression for a long time that it is alien and foreign,” Pasnik said. “But that’s so disconnected from the original intentions.”

The original design of the building was intended to be open and transparent. “City Hall is built to be open, there’s quite a lot of glass, and it’s quite continuous with the plaza. The whole idea was to make the building part of the plaza’s life,” Pasnik said.

The 30-year master plan does not majorly interfere with City Hall. Instead, smaller scale changes to the interior will take place, along with reorganization and reprogramming of the space. The first phase of renovations will include reopening the north entrance and second floor of City Hall to the public, with the goal to increase accessibility.

In his 1963 testimony, Cobb wrote: “It is indeed gratifying to find that the winners of the City Hall competition have not only recognized this intent but have brilliantly exploited its full potential in architectural terms, thereby creating a building that we believe will be a source of pride to Bostonians for generations to come.”