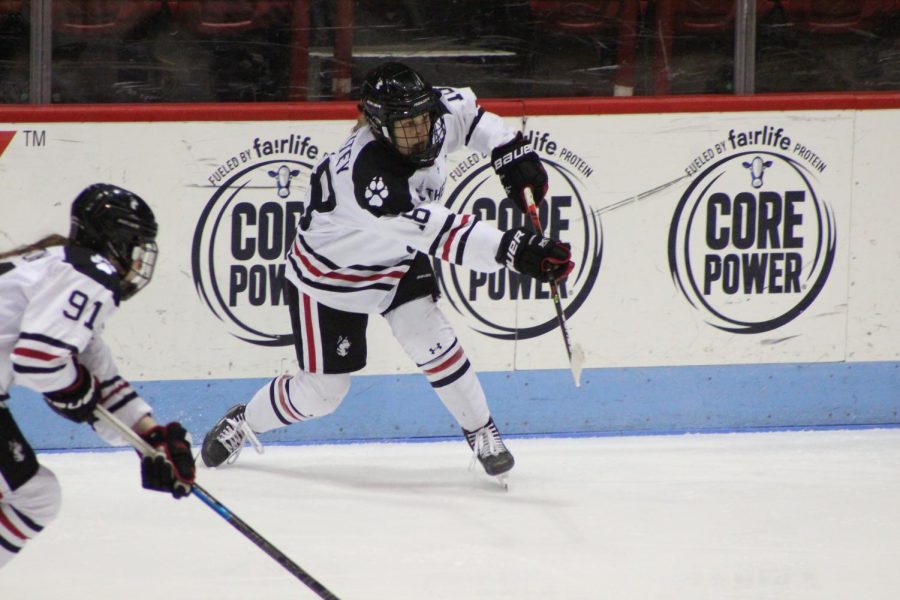 After a sluggish second stanza left top-seeded Northeastern level with eighth-seeded Vermont, the Northeastern women’s hockey team needed to make a change going into the third. The Huskies did just that, with a flurry of goals early in the period to see them past UVM, 5-1, in the first game of the Hockey East quarterfinals at Matthews Arena Thursday afternoon.

With a 24-3-0 record in Hockey East, Northeastern (29-4-2) entered the tournament as the No. 1 seed. For the second straight year, Vermont (10-17-8) claimed the No. 8 seed, meaning they travelled to Boston for a best-of-three quarterfinal date with the Huskies.

Vermont opened the game with early pressure, but that eventually subsided and Northeastern capitalized. Sophomore forward Mia Brown disrupted a pass in the neutral zone and knocked the puck over to Matti Hartman. The senior forward raced in on goal and ripped her eighth of the season past Vermont’s Blanka Skodova at the left pipe.

Northeastern took their time to grow into the game, as junior Aerin Frankel did all that was required of her in net early on. UVM’s Maude Poulin-Labelle hit the pipe just after the Hartman goal, but otherwise failed to trouble the NU netminder.

NU showed its quality in the final minutes of the first. Twice sophomore forward Alina Mueller put a move on a defender to create an opportunity out of nothing — she put a good shot on goal once and drew a penalty on the second. Finally, Northeastern looked like the top seed.

But the energy from the end of the first failed to carry over into the middle frame. Poor keeps at the blue line and low energy from the Huskies allowed Vermont to create chances and, eventually, level the game. A long shot from the wing from junior forward Kristina Shanahan skipped past Frankel and tied the game at 1-1.

Based on the second period, no one in the audience was expecting any energy from the Huskies. They ended the second period sluggishly and lacked the drive that they typically display in their games. They made simple errors: missing passes and shots, leaving Vermont’s offense unattended and getting avoidable penalties.

However, coming into the period, the Huskies started it off with two goals within the first two minutes, advancing the score to 3-1. First, Brown gave Northeastern the lead on the power play with her tenth goal of the season. Mueller found her in the slot and Brown converted past Skodova.

“I noticed that Vermont had all their players packed in, almost below the hash marks,” Brown said. “I was coming down, right down the middle and I saw Alina so I slowed up a bit, saw her pass it, and just shot it.”

Next, Mueller got in on the action, just 32 seconds after Brown’s goal. Skodova got a piece of Mueller’s shot from the left circle, but couldn’t do enough to keep it out of the net.

UVM tried taking back the energy, but less than six minutes after the first two goals in the period, Junior forward Tessa Ward tossed in another goal after being fed a pass from freshman Megan Carter, just to remind the Catamounts whose house it was.

The panic and anxiety became evident as UVM started scrambling on the ice, struggling to maintain possession and touch rebounds. Unlike the other two periods, the Huskies dominated the ice, both in possession and score.

16:28 into the third, freshman forward Kate Holmes took a pass from junior Skylar Fontaine, and rocketed a one-timer into the back of the net, making the score 5-1.

“It shouldn’t always have to come down to that,” Brown said of the third-period goal flurry. “I think if we can play like that from the drop of the puck it would change a lot, it would help our confidence, too, and maybe help keep us a little more consistent.”

Northeastern’s penalty kill, as usual, held Vermont on every penalty.

“Our PK’s been good all year. The team really takes pride in it and those will definitely be some momentum builders for us,” said NU coach Dave Flint. “I never worry too much when we’re on the penalty kill.”

With all five goals coming from different players, Flint expressed his confidence in the team, especially as they begin to enter the heart of the playoff season.

“That’s the way it’s gone all year,” Flint said. “A couple of our players have significantly more points, but if you look at our scoring, it’s pretty spread out game to game.”

Knowing that any player on his team could score at any given time, Flint has confidence in his team’s success. Going into the second game in a best-of-three series with a win under their belt, it soothes the nerves that the Huskies may have originally had, but Flint knows that the Huskies will still have to fight for the win.

“They’re going to play desperate because they have to win or their season’s done,” Flint said. “We need to be ready from the drop of the puck.”