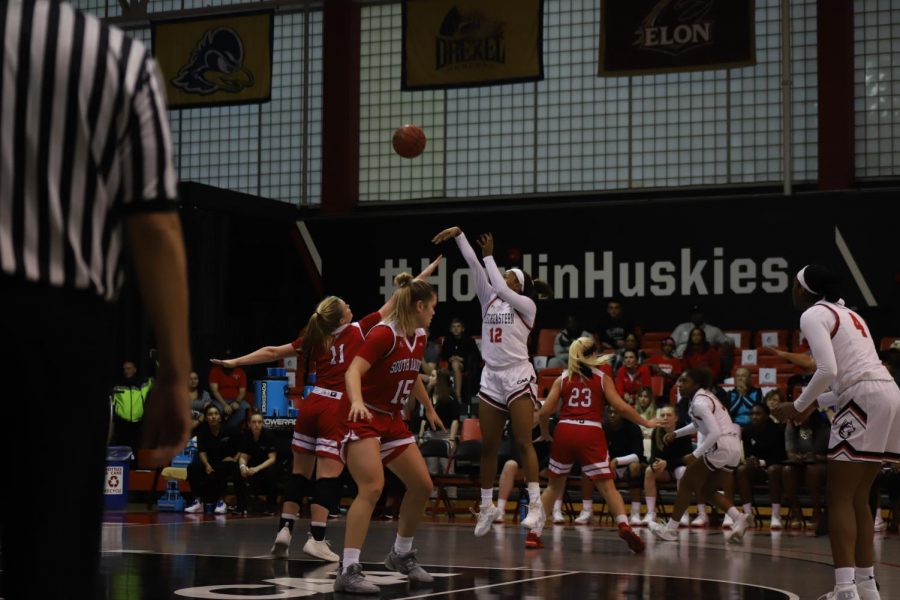 Senior forward Ayanna Dublin takes a jumper during a game against South Dakota earlier this season.

Solidifying the No. 5 seed for the CAA tournament, the Northeastern women’s basketball team ended their 2019-20 regular play season on the road with a win against the Hofstra Pride, 62-54.

NU (13-16, 9-9 CAA) has now secured a spot in the quarterfinals of the tournament for five consecutive years, after receiving a bye for the first round. They will be playing No. 4 seeded Towson (14-15, 9-9 CAA), of which they split the regular-season series.

Following an impeccable 28 point career-high game against Charleston, sophomore forward Alexis Hill looked to do the same against the Pride (3-26, 0-18 CAA).

The Huskies hit the ground running in the opening quarter with an aggressive start. Going on an 8-0 run over two minutes set them up with a lead of 18-7. NU had a strong shooting percentage for triples of 80 percent and a high field goal percentage of 58 percent compared to Hofstra’s 43 percent.

This was the third time this season Northeastern scored 20 or more points in a quarter, with the opening quarter ending in favor of the Huskies, 21-14.

Senior guard Shannon Todd fittingly started the second quarter with a triple and senior forward Ayanna Dublin got the and-one to give the Huskies an 11-point lead, giving them six points in less than a minute. Despite this strong effort, the Pride came back within six points by rendering the Huskies scoreless over two minutes.

Thankfully, sophomore guard Katie May stepped up to the plate and sank a three, which was assisted by junior guard Stella Clark, to help end the opening half with NU having a secure lead, 39-27.

The last two quarters seemed to be the start of a comeback for the Pride as they attempted to remain in the contest with the Huskies. Although Hofstra outscored NU in the first frame of the second half, the Huskies shut them down in the final quarter, ending the game with one final win for the season, 62-54.

Northeastern will now head into tournament play March 12 against the Towson Tigers at Elon University in North Carolina.