Swiss forward stakes claim as “one of the best, if not the best” in the NCAA 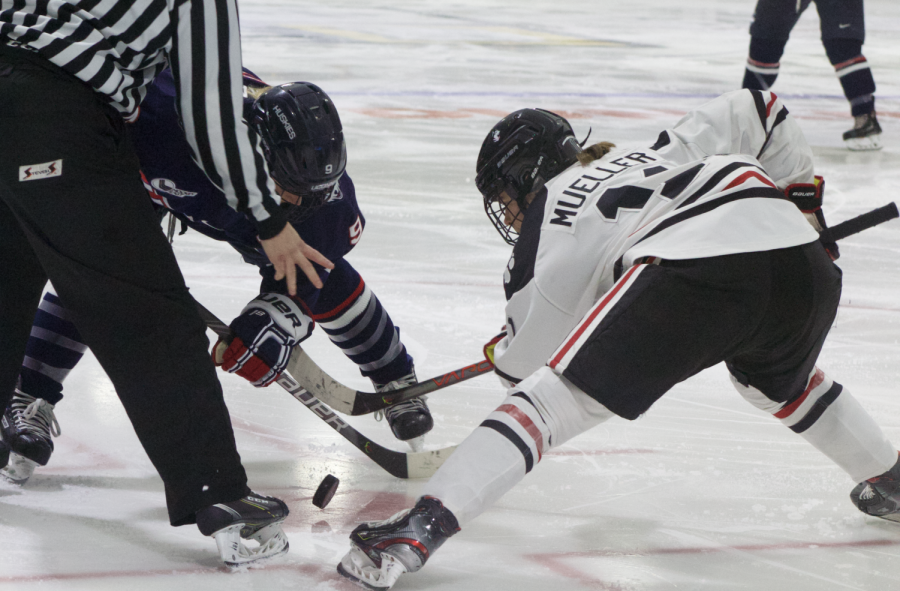 After yesterday's Hockey East title game against UConn, the Swiss native further proved why she is a Patty Kaz finalist.

Since her first skate on an NCAA rink, Alina Mueller has been a step above the rest.

The Swiss international seems to always be on the ice, and appears to cover the entire rink when she is. She is an elite penalty killer, mans the point with prowess on the power play and makes her presence felt in 5-on-5. She’s an Olympic medalist, a two-time Hockey East champion, the second-fastest NU player to 100 points, one of only three Huskies to crack the 60 point total in a season, the newly-crowned Hockey East player of the year, a Hockey East tournament MVP and a Patty Kazmaier top-3 finalist. It’s quite the resume.

That final honor, the Patty Kazmaier Memorial Award, is annually awarded to the best player in women’s college hockey. It is the most prestigious honor a women’s player can receive, and after her performance in Sunday’s Hockey East Championship game, Alina Mueller might just be in the driver’s seat.

Mueller took over the first period, ending the frame with three points on a goal and two assists. First, she took a pass from Megan Carter and played it beautifully across the face of goal into the stick of Skylar Fontaine. The pass showed off Mueller’s pinpoint accuracy and her playmaking instinct.

“I’m better next to the net than in front of the net,” Mueller said. “I found an open space there and [Carter] saw me. It was a great pass. [The UConn defenders] all shifted towards me, so the back, [Fontaine] was all alone there.”

The second goal was started by Mueller and eventually finished off by linemate Jess Schryver. She won the puck in the Northeastern zone and sent an outlet pass across the ice to Chloé Aurard to set the rush free.

The third and final Northeastern goal of the period was a peak for Alina Mueller. She controlled a pass from Aurard and set up a slapshot from the point. As she dropped to a knee, Mueller watched her shot fly into the bottom left corner of the net, stunning UConn goalie Morgan Fisher as it zipped past her.

But what makes Mueller special is her ability to create out of nothing. A third-period scuffed shot from Carter fell to Mueller, and she spun and shot in one motion, forcing a good low save out of Fisher. Plays like that are difficult to pull off, but are second nature to the sophomore.

“She’s proven she’s one of the best, if not the best player in the country,” NU head coach Dave Flint said of his top-line center. “I said it the other day to [Hockey East Commissioner] Joe Bertagna, I don’t think I’ve coached a player that’s as smart as she is. She’s got all the tools.”

The pick of the bunch was Northeastern’s seventh goal, as Mueller danced past multiple UConn defenders to break through on net. She slyly played it across to Schryver, who buried her second of the game with ease.

With Northeastern firmly in control, the top line was pulled after that seventh goal.

“She had [four] points — we didn’t put her out the last seven and a half minutes. She could’ve maybe had another point,” Flint said.

“They were a buzzsaw,” Flint said of his first line. “They were utilizing their speed, they were taking the D wide, getting pucks in, establishing a good forecheck. It was really clicking today and it paid off.”

Mueller has 66 points on the year (27G, 39A), but according to her, that wouldn’t be possible without Aurard and Schryver bombing down the wings beside her. Aurard (21-28-49) finished the season as the second-top scorer in Hockey East play and is a point shy of her first 50-point season. Schryver (6-19-25) is the second-highest scoring freshman on the NU roster (Katy Knoll has 26) and has the fourth-most assists — she also has a knack for big game goals (two in this one to go with a big goal in the Beanpot final).

“I enjoy them,” Mueller said. “Chloe is a great player, and also Jess works hard for us and our line. We’re more happy if someone else on our line scores than ourselves.”

Another Husky Mueller had high praise for is Hockey East’s defenseman of the year Skylar Fontaine. The junior has 42 points on 17 goals and 25 assists and has built great chemistry with her Swiss teammate.

“With Skylar, coach said yesterday that she’s an unbelievable player and you just have to let her go and do her thing,” Mueller said. “She’s using her speed perfectly and I try to keep up. She always sees me in open spots.”

Wisconsin senior Abby Roque and Clarkson junior Elizabeth Giguere are the other two Patty Kaz finalists. Roque (26-32-58) plays with other top threats such as 2018 Patty Kaz winner Daryl Watts on a remarkable Wisconsin team. Giguere, (37-29-66) is a 2018 national champ and carries the offensive load for the Golden Knights. Mueller has numbers that are on par, if not better than her competition. She has a real chance to be Northeastern’s first winner since Kendall Coyne in 2016.

The winner will be announced on Saturday, March 21 as part of the NCAA Frozen Four weekend.