Shannon Todd: Her 1000th point and her final season 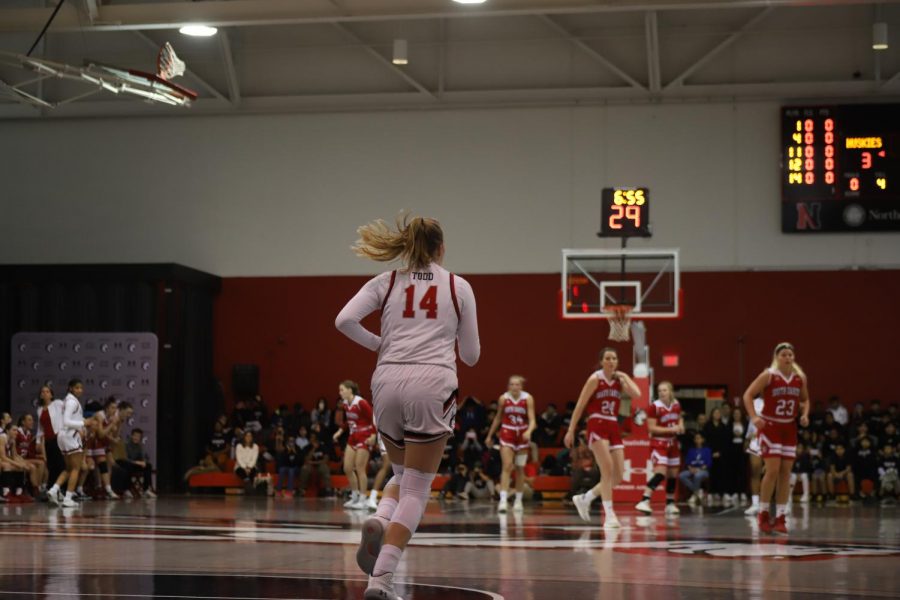 Senior guard Shannon Todd is the 22nd player in program history to reach 1000 points at Northeastern.

Scoring 1000 points once is an amazing feat. Doing it twice during a basketball career, however, is tremendous. Number 14-wearing senior guard Shannon Todd did just that as she joined the 1000-point club on Feb. 21 against James Madison, making her the 22nd player in the NU women’s basketball program to do so.

Goofy, caring and loyal are some of the attributes Todd used to describe herself. Hailing from the small town of York, Maine, there weren’t many opportunities for Todd to play basketball until she joined the New England Crusaders, one of the top girls’ basketball clubs in the country. Through the Crusaders, Todd started playing more regionally as opposed to locally, giving her more exposure and causing colleges to start to take an interest in her play.

“I started to get recruited my freshman year and got my first offer and that was really exciting,” Todd said. “As I got older, I narrowed it down to my top three, and what got me to Northeastern were the coaches and the relationship they had built with me before I even committed. I felt like I fit in.”

Scoring her 1000th point in high school was very similar to how she scored her 1000th point in college. In college, it fittingly came on a three-pointer, as she leads the team in three-pointers made this season with 53 while hitting 36 percent of her attempts. Both assists for each of those milestone points came from her best friends on the team, and for her most recent feat, that was sophomore Katie May.

“It’s a lot harder to accomplish this feat in high school because there are fewer games, but the feeling that comes from accomplishing this goal is incomparable,” Todd said. “There’s a sense of pride that comes with playing for the name on my jersey, whatever that name may be.”

Stemming from a sports-dominated household where both her parents and siblings played basketball and golf, Todd has always been surrounded by sports. It was only natural that she had a basketball in her hand as a 3-year-old and attended nearly every one of her coaching parents’ and siblings’ games.

Todd is currently a graduate student and a Double Husky at Northeastern, having completed her undergraduate career in criminal justice and psychology in just three years. She is now pursuing her Master’s degree in criminology and criminal justice.

“I’ve always been interested in crime and criminals, and after having taken a psychology class that I loved in high school, putting them together was the best fit for me,” Todd said. “Studying the minds of criminals and why people commit crimes was the most attractive aspect of the combined major for me.”

After she graduates, Todd hopes to travel to various locations around the world, including Australia, Italy and Denmark, from where her roots originate. She also wants to pursue a basketball career overseas as she is not yet ready to give up the rock and rim that she has grown up with.

“Maybe one day I’ll go into coaching but definitely not yet, I still have more to give this game I love so much and maybe get a job in my field first,” she said.

Some fast facts about Todd include that she has listened to the same pre-game song since middle school (‘Till I Collapse” by Eminem), her favorite color is purple and her favorite artist is Dan + Shay. In 10 years she hopes to be at a place in her career where she is happy with her job and has seen the world as much as she can.

“I truly am grateful for everything Northeastern has given me, the opportunities, the friendships, the memories, the experiences. I feel so blessed and I have no regrets during my years as a Husky.”