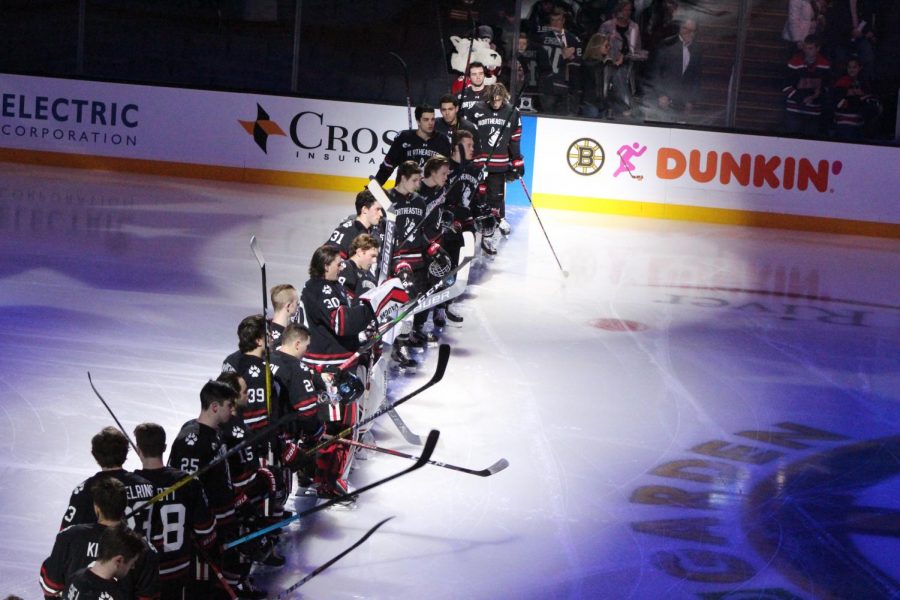 Men's hockey standing for the national anthem during this year's Beanpot.

As Coronavirus-related sports news sweeps across the country, the CAA announced in a press release that the 2020 CAA Women’s Basketball Championship and the rest of the spring season was put on hold. Outside of the CAA, women’s hockey’s national tournament quarterfinal against Princeton was cancelled. Additionally, Hockey East announced that the 2020 Hockey East Men’s Tournament will also be cancelled and Northeastern announced that all club sports activity has been suspended.

“The Colonial Athletic Association has made the decision to cancel the remainder of 2020 CAA Women’s Basketball Championship in response to continued developments regarding the spread of the Coronavirus,” wrote associate commissioner Rob Washburn. “In addition, all CAA spring sports contests have been suspended until further notice.”

A few hours later, the NCAA released a statement on the status of it’s national tournaments, including March Madness and the Frozen Four tournaments.

“Today, NCAA President Mark Emmert and the Board of Governors canceled the Division I men’s and women’s 2020 basketball tournaments, as well as all remaining winter and spring NCAA championships,” it said. “This decision is based on the evolving COVID-19 public health threat, our ability to ensure the events do not contribute to spread of the pandemic, and the impracticality of hosting such events at any time during this academic year given ongoing decisions by other entities.”

Men’s hockey had been scheduled to face UMass Amherst this weekend in the Hockey East quarterfinals. Women’s basketball was scheduled to tip-off their postseason this afternoon, while a packed weekend of Husky sports had been expected prior to the announcement, with men’s and women’s soccer and baseball all having games scheduled. Following the CAA’s announcement, it seems all of those seasons are over.

Men’s and women’s track and field, which are part of the CAA, are cancelled too. Men’s rowing, which isn’t CAA affiliated, will also cancel their season.

“The decision was made after discussions with the conference’s administrative personnel,” Washburn wrote. “Our top priority remains the well-being and safety of our student-athletes, coaches, administrators and fans.”

Last night, the NBA suspended their season. Today, the NHL fell. Junior hockey leagues, including the USHL, one of Northeastern’s major pipelines, have also been put on pause.

The women’s hockey team has advanced past the Hockey East playoffs, meaning their cancellations would come from the NCAA itself. Their season was the only one to survive the initial cancellations of the day.

The women’s hockey team was just one win away from their first Frozen Four in program history, which was scheduled to take place in Boston.

This is a developing story that will be updated. Refer to huntnewsnu.com for updates.

Updated at 2:10 pm March 12th to include that club sports have also been cancelled.

Updated at 5:10 pm March 12th to include that the women’s hockey quarterfinal had been cancelled.