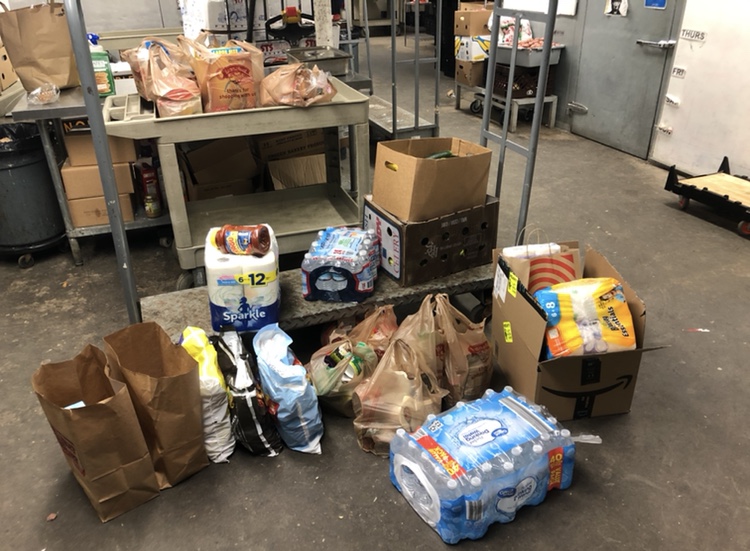 Matt Sullivan, a Northeastern first-year student, raised over $2,100 with his younger sister Cat Sullivan to buy groceries for food banks over the past three weeks.

Inspired by his mother, Sullivan had been searching for a way to give back to his community in Kennebunk, Maine.

“I was just trying to figure out a way that I could help a problem,” said Sullivan, a business administration and communication studies combined major. “My mom is a doctor so she’s been on the front lines of everything with corona.”

The Sullivans got the idea during a phone call with their grandmother on March 20. Their grandmother had mentioned how food banks are in need and that people delivering food were a necessity.

“I thought to myself, ‘Well, as long as I’m sanitary about it, I can definitely help,’” Sullivan said.  He and his family gathered canned goods they were willing to donate, and then he posted to his Instagram.

“I had basically said, ‘If you have anything you’re willing to donate, I’ll come pick it up.’ And then I also put out that I was accepting Venmos and if people Venmoed I would just go to the store and pick up food,” he said.

The reaction he got exceeded his expectations.

“There was nothing in my Venmo account and then I woke up and there was $256 overnight. Which was huge. I was expecting $60 in total,” Sullivan said.

He realized that if he kept his Instagram and Snapchat followers interested he could get even more people to donate.

Cat, a sophomore at Waynflete School in Portland, Maine, also posted on her social media and was shocked by the response. “It honestly took off, neither of us expected to get anything like the reaction that we’ve gotten,” she said.

Grace Allen, a first-year architecture major, was one of the people who donated.

“I was really inspired by his act,” she said. “I spend a lot of time in Maine for vacations so I felt like I could understand and grasp the difference it would really make. I feel proud to be a part of what he did.”

The siblings have been to six food banks throughout Portland, Maine. Wearing protective gear they load up their car with groceries and then deliver to food banks. Alternating which grocery stores they go to they’ll go back and forth for as long as the day allows.

It’s a fulfilling moment for the two when they arrive at the food banks. “They’re not expecting the entire car to be full. So they’re definitely very gracious and surprised,” Sullivan said.

The majority of the donors are high school and college students. Sullivan estimates that there have been over 120 donors.

“I told [the people working at the food banks] what I’ve been doing and they’re just really excited to see that primarily the youth are the people that have been donating,” Sullivan said. “That everyone has banded together even from the college age and high school age.”

Due to Maine Governor Janet Mills’ March 31 Stay Healthy at Home directive, the siblings have stopped making grocery runs, however their peers’ responses have made a clear impact on them.

“It’s just been really incredible to do something, when at the beginning of this [project] I definitely felt a little bit hopeless,” Cat said.

Sullivan shared this sentiment. “I’m grateful and I’m really happy to see that people really took this seriously and didn’t blow it off,” he said. “When the opportunity presented itself people stepped up and for me it was really fulfilling to see.”

He added, “I think it’s kind of a beacon of hope right now when everything is really crappy.”