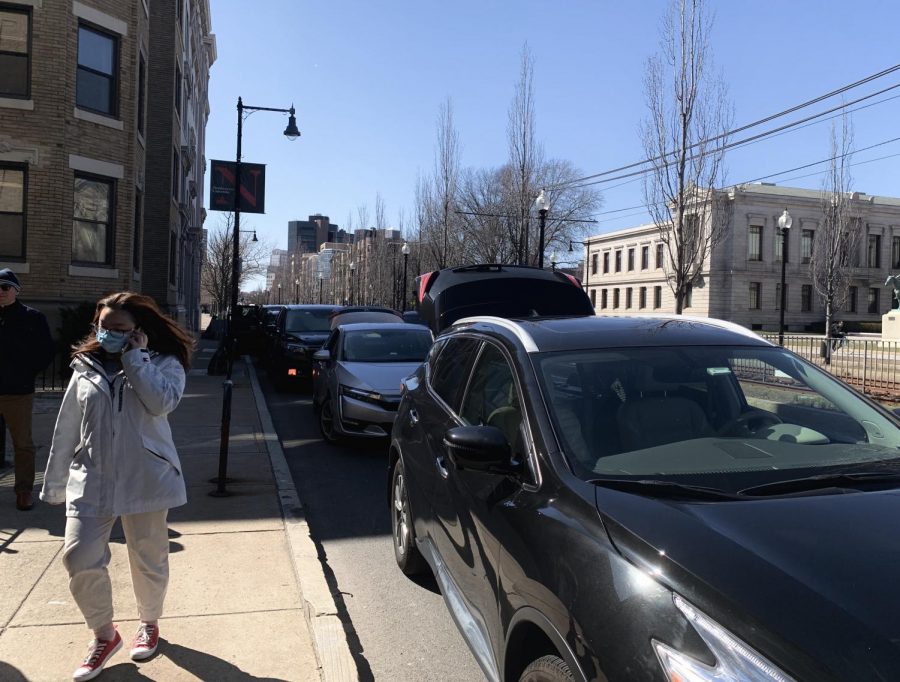 Believing the current policy did not go far enough, citing its pre-grading April 14 deadline and two-course limit, Brown asked staff from the university’s Division of Student Affairs to approve an email blast to students with information about the policy’s implications.

Leaders of the Student Government Association, or SGA, wanted to make sure students knew how their decisions would fit into major and minor requirements or affect plans for graduate school. SGA leaders also wanted to direct students’ concerns to the provost’s office to make sure their voices were being heard, Brown said. But April 7, a day after the SGA Senate passed legislation calling for an expansion of the university’s pass/fail policy, student affairs staff called Brown and told him “no.”

“I was told that there [was] no current plan to change the policy on pass/fail, so student affairs [would] not be able to send out the email,” Brown said. He asked to discuss the decision further, he said, but student affairs went silent for the next three days.

Asked for comment, a Northeastern University spokesperson wrote in an April 13 email: “The messages that go out through [the] university-owned listserv are at the discretion of the university administration. Student groups have the ability to reach other students and engage them through multiple channels, including social media platforms.”

This time, left without administrators’ assistance, Brown and Executive Vice President Gabby Nobile started work distributing the information on their own.

On April 10, using their personal email addresses — and rotating through a few, because some email platforms limit outgoing emails to 1,000 per day — the pair spent hours sending the message to batches of 500 students, eventually reaching more than 15,000 “@northeastern.edu” recipients.

Still, they weren’t able to contact everyone. Their outreach was limited, Nobile said, to usernames consisting of a last name and first initial, and Brown said some of the emails counted may have been sent to students who have already graduated.

The next day, Bean announced Northeastern would allow students to designate some or all classes for pass/fail grading. Administrators, however, have yet to acknowledge students’ calls for an extension of the April 14 deadline, as articulated in a 1,950-signature petition and in SGA’s legislation, Brown said. And the provost’s email doesn’t designate anyone to take complaints, though Brown is asking students to direct policy concerns to Bean’s office directly if they’re looking for policy changes rather than individual guidance.

Some of the information SGA hoped to provide students is publicly available on Northeastern colleges’ websites — the university’s “prehealth” advising program published an online FAQ advising students to “NOT choose to have their Spring 2020 prerequisite courses graded using the Pass/Fail option” for admissions-related reasons — but Nobile said she doesn’t think this is enough.

“I had a lot of students in my class that said to my professor, ‘Oh, do you know what happens if we take the class pass/fail? Will that affect grad school?’” Nobile said. “They didn’t even know that those resources were available for them.”

Student affairs staff told Brown on April 10 that they would work with him and his successor, Kate Kutnetsova, to establish an unfiltered channel of communication between SGA and the student body for the future. Regardless, Brown said, he’ll do his best to make sure students have the information they need.

Peter Siccardi, an SGA senator and a principal author on the April 6 legislation, said he drafted it because he believes a change in environment can have a drastic effect on academic outcomes. For example, while his own family is accepting of his sexuality, he said, other students in the LGBTQ+ community may face extra stress while at home.

“When everyone was forced off campus, a lot of LGBT people were forced into not necessarily safe or welcoming environments, which makes it very difficult for them to focus on their coursework,” Siccardi said.

He emphasized further that some students, himself included, rely on on-campus resources like the Disability Resource Center for accommodations while completing coursework.

Beyond the changes Northeastern has already made, Siccardi said he hopes administrators will consider extending the pass/fail deadline to allow students to see their grades before making any decisions.

“I know I’m not the only one who has professors who have not uploaded grades. I have one class right now where to this very moment, I have not a single grade in Blackboard,” Siccardi said. “How am I supposed to reasonably pick whether or not I want it to be pass/fail when I have absolutely no idea what my grade is?”

Josh Sisman, an SGA senator who joined Siccardi in writing the pass/fail bill, wants students to remember this moment. He sees the shift in university policy as the combined result of SGA legislation and student action.

“By coming together, we show that when we use our voice, collectively, the university will make change,” Sisman said. “Obviously, the change was not as much as we want — but if this is what we can do online, I imagine [we] can be way more effective in the future.”

The Office of the Provost has asked that students looking for individual guidance contact their academic advisors for assistance. Students looking for general information about the implications of Northeastern’s pass/fail policy can consult the following resources, designated by program:

SGA leadership has asked that students looking for a change in the university’s pass/fail policy direct their concerns to the Office of the Provost. Read SGA’s email to students here.

Jessica Silverman contributed to the reporting of this article.