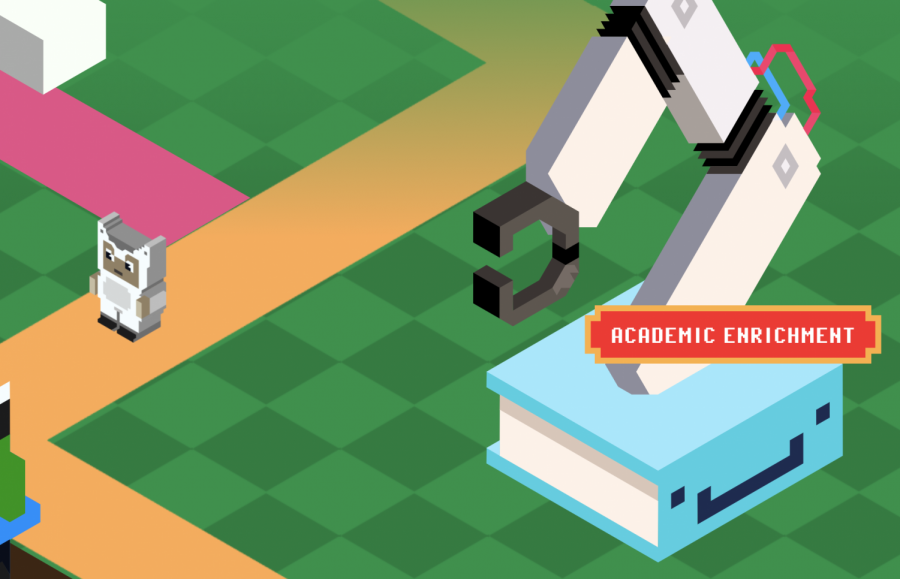 The virtual husky navigates toward the Academic Enrichment booth.

Northeastern hosted its first-ever Fall Fest World today to introduce all of the different student organizations offered on campus. Due to COVID-19 concerns, the university decided to move the traditionally in-person event to a video game-like format, where students roam around as a husky character to various booths to get information on clubs.

The event had three shifts to accommodate students from different time zones: 7 to 9 a.m., 11 a.m. to 1 p.m. and 1 to 4 p.m Eastern Standard Time. The clubs were organized by categories, such as leadership and governing, club sports and performing arts. When students clicked on a virtual booth, they were presented with a brief description of the organization, photos, videos and the opportunity to join a live chat with members of the club.

Marty Sullaway, a first-year electrical and computer engineering major, initially joined the 7 to 9 a.m. session, but found that more clubs were available for Zoom chats in the 11 a.m. to 1 p.m. session. Sullaway explored clubs such as the Wireless Club, Northeastern Hillel and the Alpha Epsilon Pi fraternity.

“All the clubs I talked to seemed really well-informed and excited, and everyone wanted to welcome you which was awesome,” Sullaway said.

The site also featured a two-hour-long video of different clubs on campus. Forty-five student organizations, including the Nor’easters acapella group and NUDANCO dance company, performed on the Blackman Auditorium stage in pre-recorded videos.

“It was really cool because it highlighted a lot of different things on campus that I’m not sure if I would find naturally myself,” Sullaway said. “It was cool to force myself to be exposed to that.”

First-year computer science and design major Leroy Shaigorodsky shared Sullaway’s views on Fall Fest World. While he wasn’t able to attend many of the club Zooms due to scheduling conflicts, he felt that Fall Fest World was a unique and enjoyable experience.

“Fall Fest was definitely probably different than how it was done before, but I did think it had a little bit of its charm in how the website was set up,” Shaigorodsky said.

“Given the circumstances, it was a fairly nice kind of event. Considering what they could have done and what would have been the easier way out to do this, I think what they put in the product was very satisfying.”

Sullaway appreciated the opportunity to learn about different organizations coming into his first year at Northeastern.

“It sucks that we have to be like this, but [Fall Fest World] was really good considering where we are in the world,” he said. “I think it was well-pivoted.”