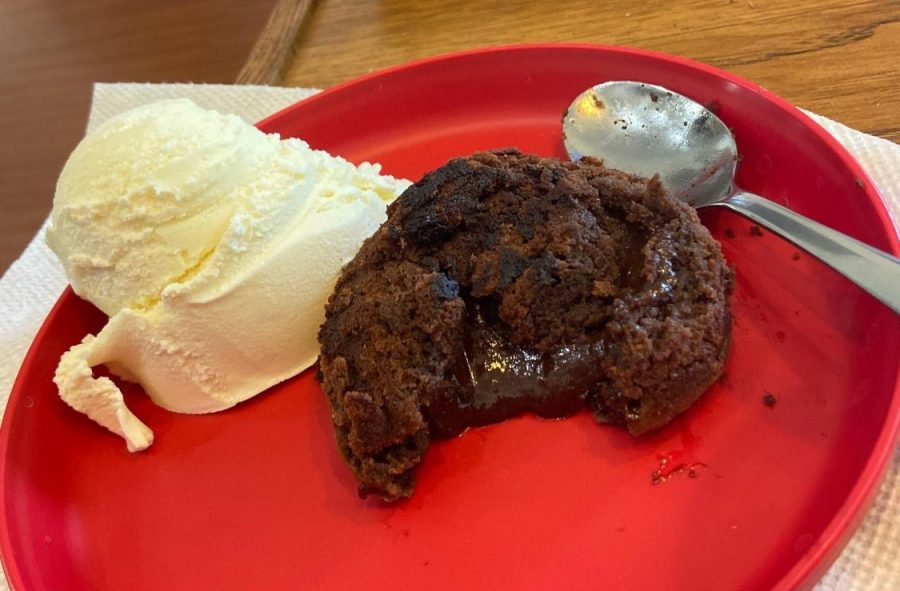 The final product of the chocolate lava cake that was baked in this article.

What’s up guys, it’s Jordan, the City Editor of the Huntington News.

While some of you may know me as a sports guy or a city reporter, what some of you don’t know is that, for the last two weeks, I’ve been an avid baker.

It all started one morning in my new apartment. I woke up and was immediately hit with a wave of hunger like no other. Naturally, I decided to make chocolate lava cake.

With my roommates watching from across the room, I prepared what I needed: flour, sugar, salt, butter. And then, horror struck — I didn’t have chocolate, arguably the most essential component to chocolate lava cake. I also didn’t have eggs.

I rushed to the market and purchased my necessary goods, obtaining some semi-sweet chocolate chips, a dozen eggs and a container of dark chocolate cocoa powder. I was back before my roommates even knew I was gone.

Bowl time. I took a stick of butter and melted it together with a half cup of chocolate chips until it formed a smooth and chocolatey liquid. After debating whether I just wanted to drink this concoction, I continued, whisking together a quarter cup of flour, a half cup of sugar and an eighth teaspoon of salt.

In another bowl, I began exploring the wonderful world of egg separation. After cracking two full eggs into the bowl, I realized the recipe called for two more egg yolks. Having never baked before in my entire life, I was puzzled. How does one get the egg white away from the yolk?

Luckily, my roommate came in clutch, and I watched as he demonstrated how to pour the egg yolk from one half of the cracked shell to the other to empty out the egg whites. I felt like Gordon Ramsay as I separated the slimy liquid from the yellow center I desired.

With my eggs separated and whisked, I began the mixing process. I dumped the dry mixture and the eggs into the chocolate and butter, mixing together until a thick batter formed and there were no clumps remaining.

I prepped my muffin pan, spraying with a non-stick cooking spray and dusting the bottoms with the dark chocolate cocoa powder. I grabbed a spoon and portioned out the batter into six even muffin containers, and then slid the pan into an oven preheated to 425 degrees Fahrenheit.

Nine minutes later, my delicacies were complete. After letting them sit for a minute or two to cool down, I used a spoon to dig out a cake and plate it next to a scoop of vanilla ice cream.

When I tell you this was restaurant quality, I am not lying whatsoever. It tasted like absolute heaven. My roommates all really enjoyed it, and I immediately called my grandma to tell her all about it.

Needless to say, I’ll be baking a lot more now.