LightView residents eager to be back, find sense of community 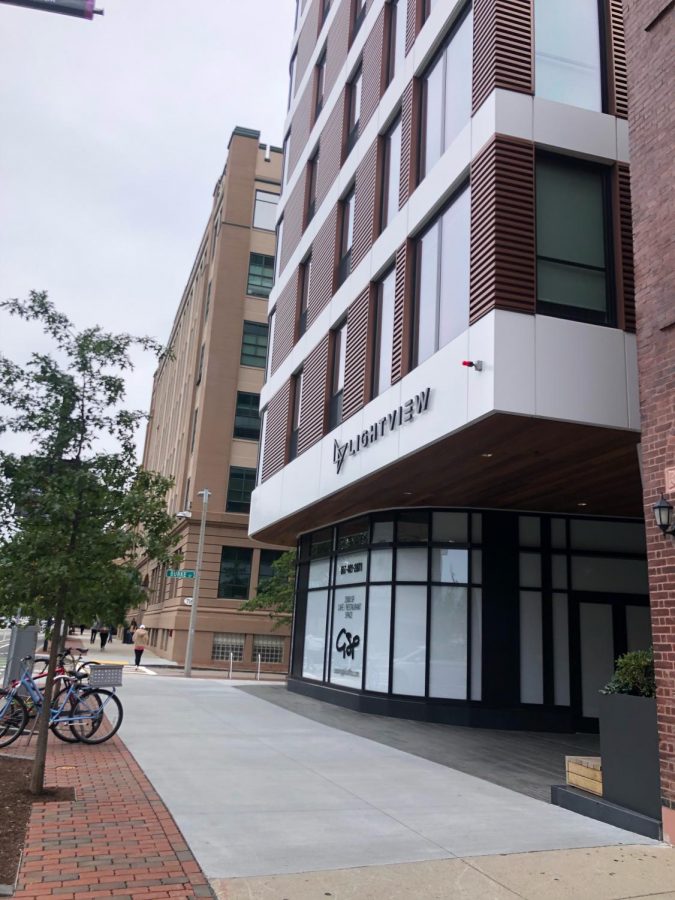 "Despite the situation, being back and seeing my friends and roommates was a major reason for me to return,” said third-year business administration major Ellie Weinstein.

Students have successfully moved into LightView Apartments, an off-campus housing complex for Northeastern, for the uncertain fall semester of 2020. Instead of approaching the proctor at the front desk of LightView with friends and family members, eager to unload and redecorate, this year is entirely different. Every worker and student has a mask on, and any slight sign of anxiety was picked up on through the intense eye contact that has become a new form of communication around campus.

Students approached the sleek building in a way similar to that of a drive-through restaurant. They drove down a side street, rolled down the windows, gave their names to LightView assistants and quickly signed in. Then a crew of workers would rapidly approach the incoming vehicle, ready to delicately unload the car of every item possible. While students signed in one by one, receiving their keys and information packets, their luggage was being transported to their rooms.

Third-year business administration major Ellie Weinstein only had kind remarks about the process after moving into LightView.

“Overall, the move into LightView was super easy. They pretty much did all the work in terms of unloading and checking in, it all took less than five minutes,” Weinstein said. “The online system also makes processing payments hassle free.”

Like most students in LightView, a variety of factors persuaded people to travel back to Boston regardless of whether classes went fully online or not.

“I really like Boston and more importantly, I have been home since March,” Weinstein said. “I definitely wanted a change of scenery, and I had this lease signed last year as well so I knew I’d be coming back anyway. Despite the situation, being back and seeing my friends and roommates was a major reason for me to return.”

After months of isolation and living a sedentary lifestyle, LightView residents who spoke with The News had lots of enthusiasm for being back, even with social distancing restrictions put in place.

“It’s really nice being back on campus, just the environment in general compared to being at home makes a huge difference,” said third-year information science and business administration combined major Tiffany Luo. “Seeing people walking around campus, especially my age, has been a really nice thing. Since I’m on co-op, I’m not really on campus, but when I am walking around there for COVID testing it’s really nice to just see people.”

LightView residents also discussed how staying active is a large part of maintaining a healthy mentality, both physically and mentally, especially during COVID-19.

“I like to take runs around the city because I like to see the energy and the people, it makes you feel a bit better about everything,” said third-year communication studies and media screen studies combined major Jack Fuchs. “When I run though, I don’t wear a mask, to be honest. I try to keep moving at a constant rate, but when I’m in the LightView gym, I keep the mask on. There are plenty of stations with sanitary wipes, everything is spread out, and when I’m doing more weightlifting, it doesn’t take as much heavy breathing. It’s a big part of my mental health.”

While students enjoy being back in LightView, their experiences fall short regarding socializing with other residents and building a community.

“I would say it’s definitely a little more difficult to meet people this year, especially in buildings just because of all the regulations,” Weinstein said. “I feel people are generally staying inside their apartments more, just for safety reasons so it definitely is harder to meet new people. There could be virtual events or something just to meet new people.”

Fuchs also had a few suggestions on how to build a stronger bond with the people living in his hall.

“I feel like we could do something on our doors, something similar to what you would do freshman year with by writing our names and interests,” Fuchs said. “Maybe LightView could do events at different times for separate halls like streaming movies in the commonspace to see if a few people show up and start a conversation.”