Somerville man offers ‘free listening’ for all in Cambridge 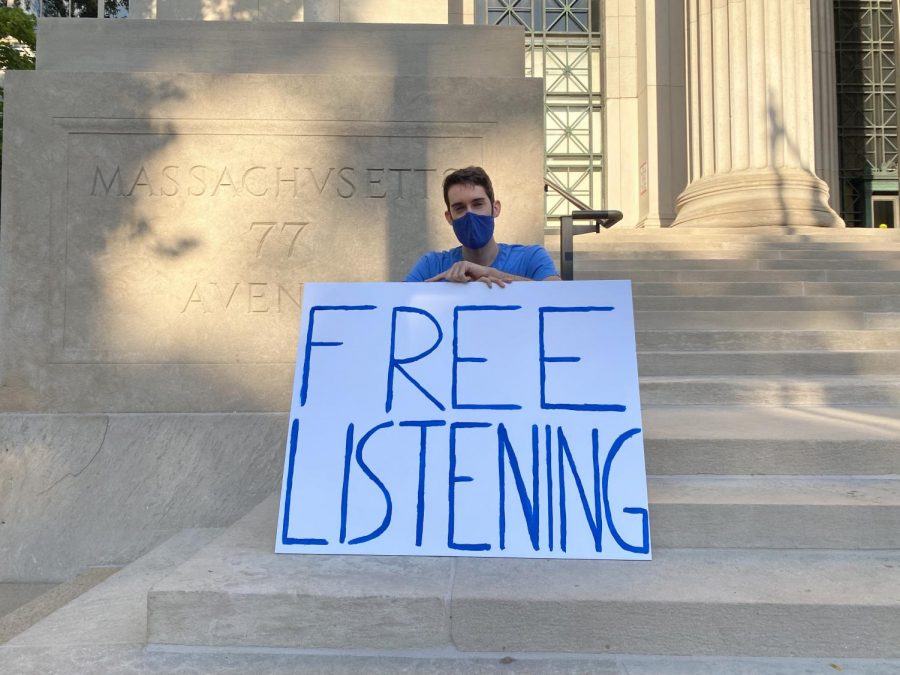 Massachusetts Avenue in Cambridge is a hub of constant activity. As commuters, college students and runners rush by, 26 year-old Kip Clark sits amid it all with a sign that reads “Free Listening.”
From March to October for the past two years, Clark has spent two hours a few days each week sitting on the steps of the Massachusetts Institute of Technology’s Rogers Building. While most people stroll past Clark without a second glance, some pause to speak with him. He has talked to about 500 people, with conversations ranging from simple questioning about Clark’s intent to deep discussions about a stranger’s personal life.
“I observed an abundance of free time,” he said, “and I desired to do something meaningful and something that brings me joy, that also gives other people some light or relief in a stressful world.”
Clark first devised the idea back in the summer of 2018 and was inspired by a friend who worked on a climate change and water rise project at the time. She went out in public with a sign that read, “Tell me about climate change and water rise,” to gather audio from strangers.
“I liked how she was inviting people to come talk to her instead of stopping them on the sidewalk,” Clark said.
Clark also has a greater purpose in wanting to make a “positive impact” in others’ lives, simply by lending an ear, because he believes “listening is something that is lacking in our society.”
“I think a lot of people don’t have anyone to talk to,” Clark said. “Yet, I acknowledge that I am not licensed to give advice on anything. When people come to me for ‘sessions’ – if you want to call them that – I ask how they want me to listen. Do they want me to react, ask questions or give advice? I don’t want to give people advice they aren’t looking for, or overstep.”
He also attributes spending hours listening to strangers to pure curiosity.
“I think the world is fascinating,” he said. “The world is huge. How could you not have curiosity? A lot of the curiosity in people that is natural is distilled or boiled off by the routines of life. On some level, doing this feels like part of my identity, something that I am proudest of.”
One of Clark’s most memorable conversations was with a man who asked if Clark himself needed someone to listen to him.
“I told him, ‘No, I’d actually like to listen to you,’” Clark said. “We went on to talk about how it was his first day out of prison, and he had been struggling with addiction for over 10 years. It shocked me how that immediate reaction to a stranger on the first day you’re out into society would be to stop and listen to them.”
Prior to COVID-19, Clark would have about four or five people come speak to him on any given day. However, that number decreased to one or two per day back in March when COVID-19 cases spiked in the United States.
“It did feel like the consistency with those people who did stop had more depth, like ‘Hey can I talk to you about college closing?’” he said. “It felt like I traded quantity for quality.”
Friends and family have suggested he make a social media account about his experience with his sign, which he refuses.
“I’m not looking to get a million followers or some sort of personal gain from this, I think that would dilute things,” he said. “I’m not going to add an asterisk after the ‘free’ in my sign and say, ‘This is going to get published, I’m going to benefit from this.’”
Instead, Clark prefers to keep his interactions to himself and those who choose to take him up on his offer. “I really cherish the role I get to play with this sign.”