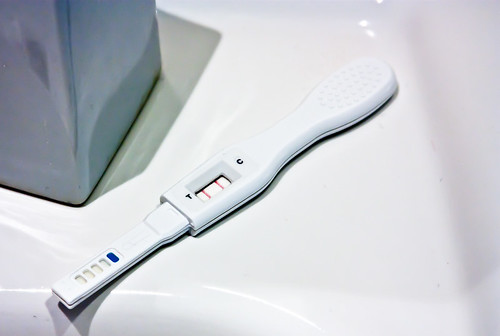 "Pregnancy Test" by http://snow.ipernity.com is licensed under CC BY-ND 2.0

The two main characters in 'Unpregnant' go on a journey to find an abortion clinic.

“Unpregnant,” HBO Max’s latest movie release, tells the tale of a pregnant high school teenager and her former best friend traveling across state lines to the nearest abortion clinic. While filled with lighthearted coming-of-age scenes, there are prominent current issues, like the lack of access to women’s health care, that are central to the film’s message.
When straight A student Veronica, played by Haley Lu Richardson, drops her positive pregnancy test on the bathroom floor, former spunky best friend Bailey, portrayed by Barbie Ferreira, happens to be the one to find it. After an awkward encounter between the former friends and a fellow classmate barging into the bathroom, Bailey takes the test and throws it in the school dumpster. Veronica learns after a series of phone calls that there is nowhere in her home state of Missouri to get an abortion without parental consent. Enlisting the help of Bailey, she crafts a detailed road trip plan to the nearest clinic, about 1,000 miles away, in Albuquerque. Though this is the perfect setup for a jovial, coming-of-age road trip, it tells the story of the hardship that many women face trying to access reproductive healthcare.
As the duo embark on their adventure, Veronica’s conservative mom and gossipy friends are left thinking she is just busy elsewhere. A travel montage ensues that cues the rekindling of their friendship. Though the two appear to be nothing alike, with Veronica fitting the cookie cutter definition of a good girl and Bailey as a lesbian alternative character, they both struggle with the societal pressures present within their opinionated hometown. The pair run into a few bumps along the way — running from the cops, hitching a ride with a group of teenage boys to get to the bus station, stopping by a fair and getting kidnapped by a pro-life advocacy couple — that carry an adventurous feeling throughout the movie.
The girls’ relationship is strengthened as they liberate themselves from the pressures that previously plagued them. By leaning on one another and owning up to the characteristics that make them outcasts in their hometown, the two feel more comfortable and empowered. When Bailey meets racecar driver Kira at the fair, her sexuality is revealed as she quickly falls for Kira. Though their interactions are short, consisting of a few flirting moments back and forth and a cute scene in a fun house, the film embraces the normalcy of LGBTQ+ relationships. In many coming-of-age style films, a similar short romance between a main character and a side character would play out in a heterosexual relationship, but it is rare to see a same-sex relationship treated so casually. One of the most liberating scenes of the film is when Veronica and Bailey are on a ride shouting, “We are gay, and we are pregnant!” This is the first time the pair truly accepts themselves, and their relationship deepens as they become more open with their emotions.
In the latter half of the film, abortion is addressed through a seemingly crazy pro-life couple and a walkthrough of the abortion procedure. The girls gets kidnapped by a pro-life couple who try to convince Veronica she is doing the wrong thing and later chase the two after they escape to prevent her from getting the procedure. Though the scene was comical, it commented on the very serious issue of pro-lifers and other people in society who overstep boundaries and act as external forces inputting their opinions on a woman’s body.
The way that the film details the entire process of the abortion, from the check-in, to the walkthrough of the process, to the recovery after the procedure is completed, educates the audience. This is something unexpected within a teenage comedy movie. There is a light and fun tone throughout most of “Unpregnant,” but the scene at the clinic shifts in tone as it addresses the seriousness of abortions. It shows the legitimacy of an abortion as a medical procedure, while also reassuring the audience that there is nothing to fear. Later on, the reaction of Veronica’s conservative mom, who does not support abortions, is revealed to the audience. Her mom’s reaction shows a middle ground between those who are pro-life and pro-choice. Although her mom disagreed with the decision, she agreed with the fact that it was her daughter’s choice to make because it was her daughter’s body. In having the mom react this way, the film offers a point of view on abortions from both sides.
Richardson and Ferreira’s natural on-screen chemistry brought a refreshing sense of reality into the universal narrative of lost teenagers relying on each other to get through their struggles. The dialogue flowed naturally between both actresses and their interactions with one another felt very passionate, as it would be between two best friends.
“Unpregnant” leads audiences through a rollercoaster of emotions, as ex-best friends navigate hardships together and build a strong relationship along the way, while simultaneously tackling difficult and controversial current topics. The overall light and comedic tone made it the perfect choice for a girl’s movie night, yet the inclusion of political commentary throughout the movie forces the audience to ponder upon today’s heated political climate. “Unpregnant” is now streaming on HBO Max.