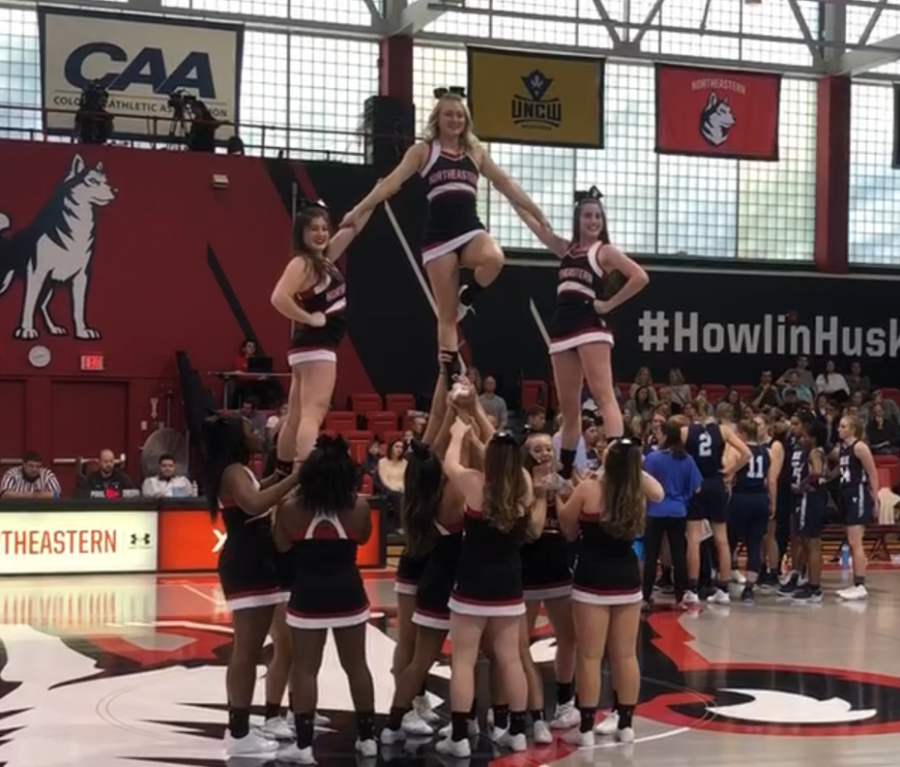 The Northeastern club cheerleading team poses in a pyramid at Cabot Center last year, but currently have to practice over Zoom like many other club sports teams.

With state and university restrictions on large gatherings, club sport teams at Northeastern are unable to practice in person for the fall semester. Many teams are adjusting to online meetings and working to motivate each other despite the lack of in-person practices.

For this semester, club sports teams are prohibited from holding tryouts as they are not able to practice in person. However, teams are still actively looking for new members, as many were also present at Fall Fest, which was held virtually this year.

Recruiting new members has been a challenge for many teams as the majority of tryouts is determined by how well an athlete can play the sport, as well as how they interact with the team and coaches.

“I think one of the biggest challenges is the retention rate for incoming students because we won’t be doing in-person events, which is what keeps people there — the energy like practices and games,” said Caroline Swenson, the recruitment chair for women’s club rugby.

For Natalie Baclawski, the women’s club swim team’s secretary, and the rest of the club swim team, they are unsure about when they will be able to go back into the pool as they await the next monthly update on the situation.

“When pool time comes around, they probably won’t be letting the whole team practice all together, which is something we’ve never dealt with before,” Baclawski said.

The ability to meet virtually only has posed many challenges for the teams, especially for the coaches, and they have had to use more creative approaches to online practices.

“I like to stop the Zoom call and ask if there are any questions or feedback,” said Alexis Brown, head coach of club cheerleading. “I also give them homework, like exercises or a skill to focus on for the week.”

The club cheerleading team, which meets once a week virtually at their normal practice time, is using Zoom calls to work on basic techniques that they can practice individually, setting the foundation and establishing the culture of being on the team.

On the other hand, not having practices means time for other activities as well. Over the summer, Brown held a mental health activity for her team, which she hopes to implement throughout the year. Others are simply looking forward to meeting with their team virtually.

“I’m really excited about the team bonding and cohesiveness because I think we’re going to make a really big effort to keep in touch and keep the team spirit while we can’t physically practice,” Swenson said.

However, there are uncertainties for teams even if facilities are reopened and practices can be held in the future. Since many club sport teams have more athletes than are allowed to gather due to COVID-19, they will have to create separate schedules and stagger their practice times. For others, practicing the sport may be a challenge in itself.

“I don’t see us being able to play for a while, especially [with rugby] being a very high-contact sport,” Swenson said.