Column: The rise of reality TV during quarantine 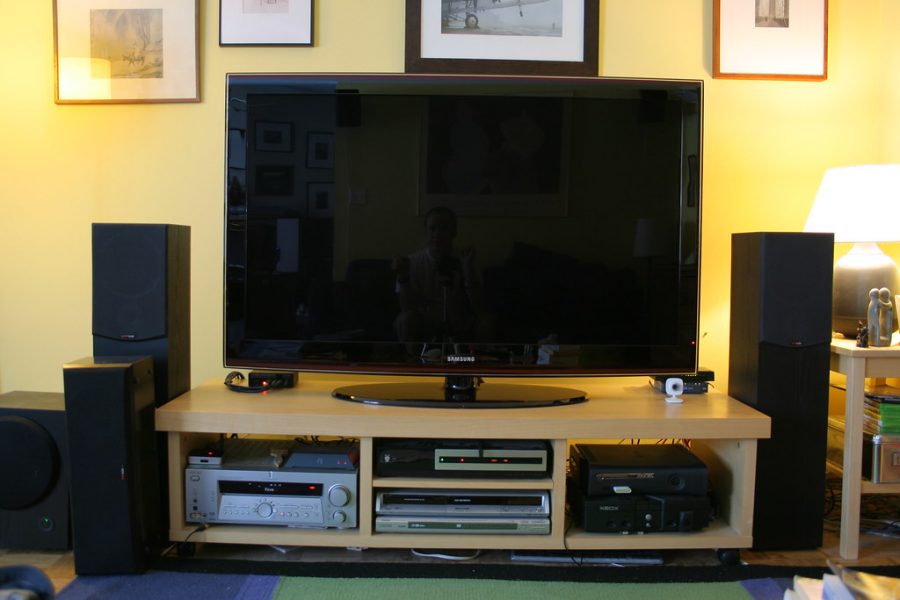 "New TV Setup" by craig1black is licensed under CC BY-NC 2.0

Many reality TV shows provided a sense of normalcy during the pandemic for viewers.

For some, quarantine was time to finally get in shape and be productive. But for the vast majority, quarantine featured cozying up on the couch, wrapped in a blanket with a hot bag of popcorn and getting the fourth “Are you still watching?” Netflix message of the day. With the world around us changing rapidly, TV became easy to cling to. Countless episodes and series were easy to take on when no one could leave their homes.

Reality TV also provided a much desired escape from the pandemic. Crazy concepts and scenarios for shows felt more acceptable than the current world situation. The interactions of characters became a substitute for socializing with friends. Obsessions with reality TV stemmed from the inability to continue normal life, so people found refuge in these fixed realities.

Due to competitions and unique social settings, it was easy to pick your favorite character and root for them. With a battle against the coronavirus at large, seeing people succeed on dating and game shows gave people a false sense of victory. Whether it was your favorite contestant on “The Bachelor” ending up engaged or your favorite “Jeopardy” candidate advancing to finals, we felt accomplished at the end of every episode. Conflicts are also resolved in two or three episodes in reality TV, while our global situation seems to have no end.

“Tiger King” took the United States by storm at the start of quarantine, as did the greeting, “Hey all you cool cats and kittens.” Carole Baskin and Joe Exotic began trending, and everyone started wondering, “Did Carole Baskin kill her husband?” A missing persons case turning into a suspected murder was the perfect way to keep worried minds occupied. Everyone was hooked to the story, especially since they could watch the reopening of Carole’s husband’s case unfold in real time.

While much of the country seemed to be consumed with big cats, some wanted to watch love stories evolve, since their own love lives were either put on pause or entailed being left on “delivered” on Snapchat. “Love Island” became an instant favorite for many, helping them escape to a tropical villa where they hoped their favorite couple would end up together. The sheer drama around the contestants stealing each other’s love interests was enough to keep anyone entertained. Who wouldn’t want to imagine themselves in paradise searching for love while currently confined in their homes?

Others watched “Too Hot to Handle,” where vain and beautiful people were put in a resort and told they could not have any form of physical contact besides hugging. With the popularization of hook-up culture, this show was a refreshing take on love, helping people reach the ever-elusive stage of a committed relationship. Despite lots of rule breaking, the show was fun to follow as the contestants grew and matured.

Ironically, “Love Is Blind” was also popular, despite having each contestant placed in their own room, unable to see the source of the voice on the other side. Lovestruck contestants could propose after weeks of blind dating, only seeing each other in person for the first time after a successful engagement. Couples were sent to spend time in the real world together to explore the question at the core of the show — is love truly blind? Even love in our COVID-19 world is similar, with singles hoping to find love without meeting in person.

Others embraced their inner chef during quarantine as “The Great British Bake Off” and “Chopped” became fan favorites, inspiring everyone to cook. Everyone loves a baking competition, and the lightheartedness of “The Great British Baking Show” made it a feel-good series. Their baked goods were made by amateurs, so with a little practice, they could be replicated at home. “Chopped” took the intensity up a level, but it was always fun to watch and shout at the TV when someone forgot to include one of their required mystery basket ingredients.

Whether it was watching people compete for the best tigers, attempt to fall in love or try out their cooking skills, reality TV provided an outlet for the emotional rollercoaster throughout quarantine. Often, people say reality TV makes your brain mush, but during the global pandemic it was what we needed: a source of sanity.