The show must go on: Actors find hope in Broadway shutdown 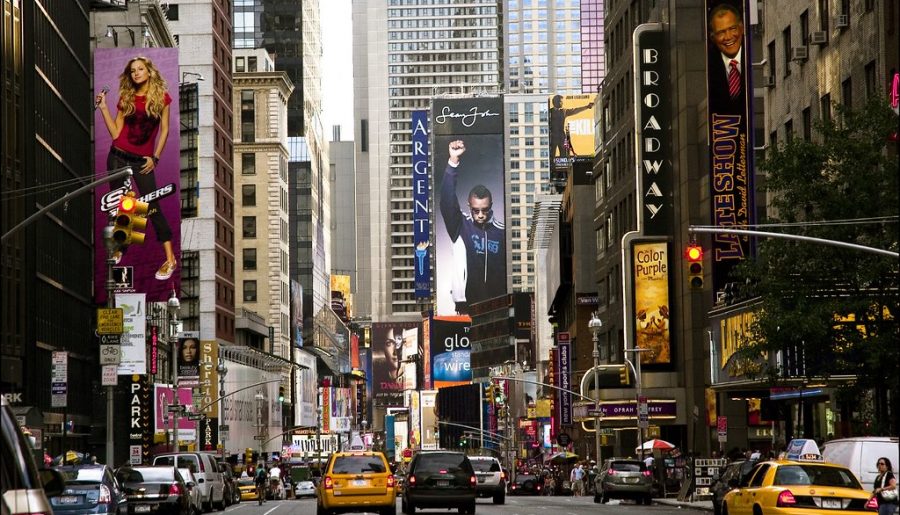 "Broadway ave." by MC SimonE is licensed under CC BY-NC-SA 2.0

Due to the COVID-19 pandemic, New York City’s Broadway performances have been shut down indefinitely. This has resulted in a massive loss of work for hundreds of performers, musicians and stagehands. Disappointed audience members have been fully refunded for their tickets through spring 2021. The show companies played their final performances on March 10 under the assumption that they were taking a two-week hiatus.

“We essentially had our closing night without even knowing it,” said actress Leslie Kritzer, whose run as Delia Deetz in “Beetlejuice” was cut short. “We thought, ‘This will last a week, and this will be done.’”

Later that week, the Broadway League announced that performances would be shut down until June 2020. Today, the closure is extended to January 2021.

According to a press release released by the Broadway League, Broadway attendance reached record numbers of nearly 15 million admissions in the 2018-2019 season. This surpasses the attendance of all 10 professional New York and New Jersey sports teams combined. Broadway brings in over $12 billion to New York’s economy alone, as well as $3.8 billion to local markets of touring productions.

The loss of Broadway has created difficulties for all performers. Mollie Parkinson, a first-year Northeastern student majoring in theater and psychology, expresses her sadness at the loss of professional theater.

“Not being able to do or see live theater is really sad,” she said. “There are so many experiences that I am missing out on and the world is missing out on.”

Actors themselves have also suffered the tremendous loss of their industry. Unlike a normal office, the experiences of live theater cannot be replicated online. In order to continue their craft, actors have had to get creative. “Mean Girls” actress Catherine Brunell is preparing for an eventual reopening.

“Sometimes I’ll just be in my car going through my lines, just in case!” Brunell said.

Other actors have begun to use video platforms like Zoom to continually audition and teach from home, which has caused serious changes, but have their benefits as well.

“On Zoom, you’re essentially working as you would on camera,” Kritzer said. “I tested for a TV show with Lucy Liu live in my house! Whereas before, they would fly me to Los Angeles and I’d test in a studio.”

As audience members anxiously await reopening, Parkinson sees a trend in activities that have started to return.

“If sports are able to reopen, hopefully theater is able to reopen,” Parkinson said. “It’s essentially the same thing –– watching people do something live.”

But it begs the question: How will Broadway bounce back? There is no easy answer. Returning Broadway to its former glory may be much more difficult than anticipated.

“We were packed every week,” said Kritzer. “You just can’t have that many people in one place anymore.”

Very little information has been released about a potential reopening plan. Broadway shows are expected to be rescheduled on a rolling basis. The health of performers, crew, musicians and audience alike must be taken into account.

In a statement, the Broadway League confirmed that they are reviewing logistics such as “screening and testing, cleaning and sanitizing, wayfinding inside theatres, backstage protocols, and much more.”

In the face of these difficulties, Broadway actors remain hopeful that in-person performances will return. Brunell suggests that live theater will be the emotional cure to self-isolation.

“Theater is going to be the salve we all need to heal our hearts,” Brunell said. “The power of theater is to investigate how we walk in the world and empathize with others.”

With online ticket sales already beginning for 2021, hopefully the Broadway lights won’t be dim for much longer.