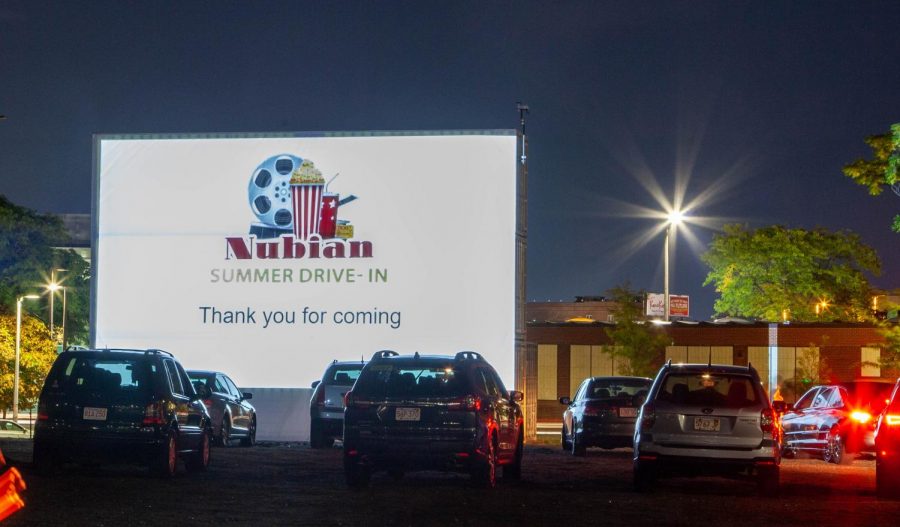 Cars parked in front of the screen at the Nubian Summer Drive-in.

Every Saturday evening throughout her childhood, Dianne Wilkerson’s mother would give her and her seven siblings a bath and pile them into the family station wagon, packed with blankets and popcorn for  the drive-in movie theater.

This family tradition is what inspired Wilkerson, now a board member and consultant at Grove Hall Neighborhood Development Corporation, often referred to as Grove Hall NDC, to bring a drive-in movie theater to Nubian Square this summer.

Grove Hall NDC is committed to uplifting the community and improving residents’ quality of life despite social, economic and environmental conditions.

Every Tuesday, Thursday and Saturday night, Grove Hall NDC invites community members from surrounding neighborhoods, such as Roxbury and Dorchester, to pack their cars into Bartlett Yard to watch classic Black films on a 40-foot screen. Saturday night is family night with free admission, and on Sundays, adults fill the parking lot to watch the Patriots game.

“We certainly solicited support from corporations in the community, but we got no response. That was really a disappointment,” Wilkerson said. “Mostly because every one of them talked loud in public about Black Lives Matter and this racial reckoning, but when we tried to talk to them about something that would be fun, we got no response. . . But we didn’t let that darken the mood or the project. We persevered.”

Racial injustice has been a painful reality in these communities long before this summer’s uprising brought racism to the forefront of American consciousness. This reality, Wilkerson said, is not forgotten, as the neighborhoods of Grove Hall, have been bearing the impacts of COVID-19 disproportionately, like many communities of color across the country.

After the mayor announced on May 8 that, due to pandemic restrictions, the community could no longer celebrate traditions like their Puerto Rican Festival, Wilkerson knew she could start something worthwhile.

“You could already see the anxiety and cabin fever start to set in. People were anxious and trying to find something they could do safely,” said Wilkerson. “So I thought, we need to do something fun.”

This feeling of anxiety resonated with India Berry, resident of Roxbury, who said her two kids grew up going to drive-in movies. Similar to the Wilkersons, drive-ins were a tradition for the Berry family.

“Really since this pandemic, I haven’t gone out. I go to the grocery store and home. That’s it. I’m someone blessed enough to still have a job and work from home. So at first, I really didn’t mind. I’m sort of a home body anyway but now, now it’s starting to get to me,” Berry said. “On top of the pandemic, all the social injustice going on in the country with Black and Brown people, it’s starting to take a toll on me mentally and I feel like I’m being locked down.”

Wilkerson knew the drive-in would be a pandemic-safe way to get residents out of their homes and give them a chance to just enjoy themselves.

In non-pandemic times, Berry and her kids, who are now 18 and 27 years old, go to the movie theater all the time. Not being able to continue this tradition during the pandemic has been disappointing for all of them, so Berry said the drive-in was just what she and her family needed.

“Being able to just get out on a Saturday night and see a movie felt really good,” said Berry.

Lee Holloway, born and raised in Roxbury, attends the drive-in any night he’s not working as an essential worker, serving his community as a security guard. Last Sunday, he and his childhood best friends piled into his pick-up truck and got a front row seat at the screening of the Patriots game.

“It really brings together the community and delivers memorable experiences,” said Holloway. “It brings back memories for me when I was a kid going to the drive-in, but being able to relive that experience as an adult in my community is priceless.”

Grove Hall NDC is committed to continuing the drive-in through October, weather permitting. Holloway will be bringing his 4-year-old grandson to see his very first drive-in movie.

“Being out there with the community is like a breath of fresh air,” he said. “Community pride, community support, that’s what we’re all about.”

Holloway said being greeted by Wilkerson made him feel safe and welcomed. Wilkerson said that there’s “nothing more rewarding than seeing the smiles on peoples faces as they leave.”

“The community has expressed overwhelming gratitude. Partly because they’re not used to this. Things like this don’t happen enough,” said Wilkerson. “My motto is we deserve nice things. Our communities deserve to have fun.”