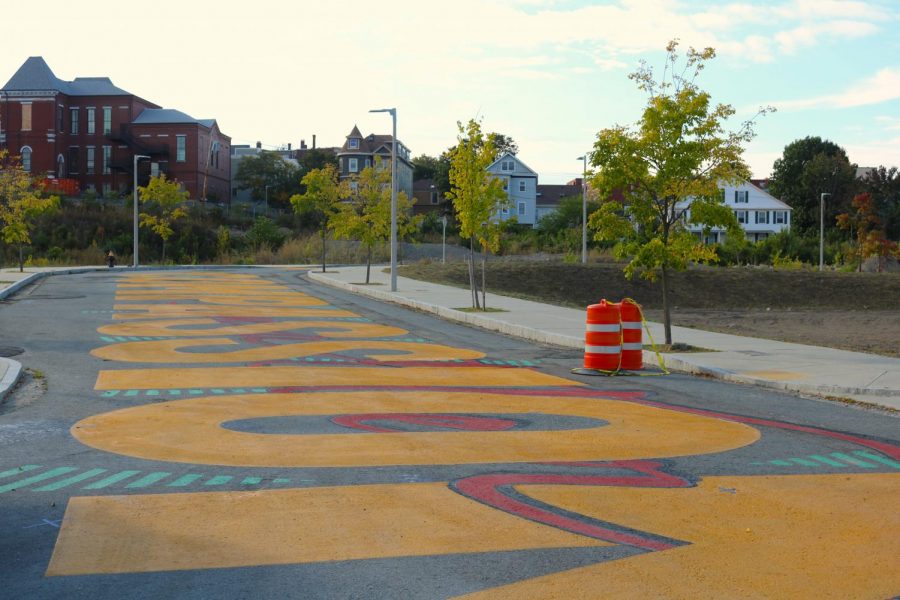 A small portion of the "Rules of Engagement" art piece in Roxbury.

Yet upon closer inspection, a more delicate red script glides between the bold yellow lettering, changing each message to “Love Black”, “Respect Life” and “Compassion Matters.”

The advocacy in Gomez’s piece “Rules of Engagement” is subtle, but a nod to Boston’s rapidly expanding public arts scene, which has become the cornerstone of political discourse over the past few years.

The piece, commissioned by the Nuestra Comunidad Development Corporation, wraps around a large construction site on Bartlett Station Drive. Ironically, it remains locked behind a “No Trespassing” gate, making the piece’s message inaccessible to the general public and only allowing for a few glimpses of the bright yellow letters from the fence’s perimeter.

Nonetheless, residents of Roxbury appear grateful for the role of street art in uplifting their community.

“It just makes the community look, you know, better and brighter,” said Ruth De Los Santos, a Census 2020 employee from Dorchester. “The message that it’s conveying is positive, and we really need that here, so it’s really inspiring to see.”

She finds that the art around Roxbury has the potential to “bring the community closer” together.

Renee Walker, who visits Roxbury every Tuesday for her job, said of the art around town, “It’s comforting, you know? It allows you to feel like you’re in a place that’s home, opposed to just being somewhere where they really don’t care.”

“Murals inside of Black communities offer opportunities for Black artists who live in their community to create strong messaging around anti-gentrification, anti-displacement and erasure by painting imagery that reflects and showcases Black cultural and Black heritage,” she wrote in an email.

She referenced one of Gomez’s earlier pieces, “Roxbury Love,” which was demolished this past summer to make space for a new apartment complex.

“Enough respect to Deme5 for all the Roxbury Love he gave us with that Mandela piece on Warren Street,” said Grant. “He is one of our finest. It is a shame that the developer did not transport it.”

Boston-based artist Cedric “Vise1” Douglas adds that Gomez’s new mural “brings a sense of pride” to him and the local street art cohort.

However, Andrea Swain, executive director of the Yawkey Club of Roxbury, finds that current arts education has run into a roadblock.

“Our young people are not necessarily having access to art that they typically would have at Boys & Girls clubs, community centers or even visiting the MFA or any other museum, because they’re closed due to the pandemic,” Swain said. “I think it’s important for the institutions that are open to provide that art for the community, and arts education.”

One of the few remaining avenues for creative expression is public street art, making its impact especially relevant during this time.

“We use art as a weapon and tool to wage war against external forces that rage against Afrocentricity,” said Grant. “It is up to us to save ourselves and contribute beautiful works to lift the vibration of our neighborhood.”