Column: The music that got me through quarantine 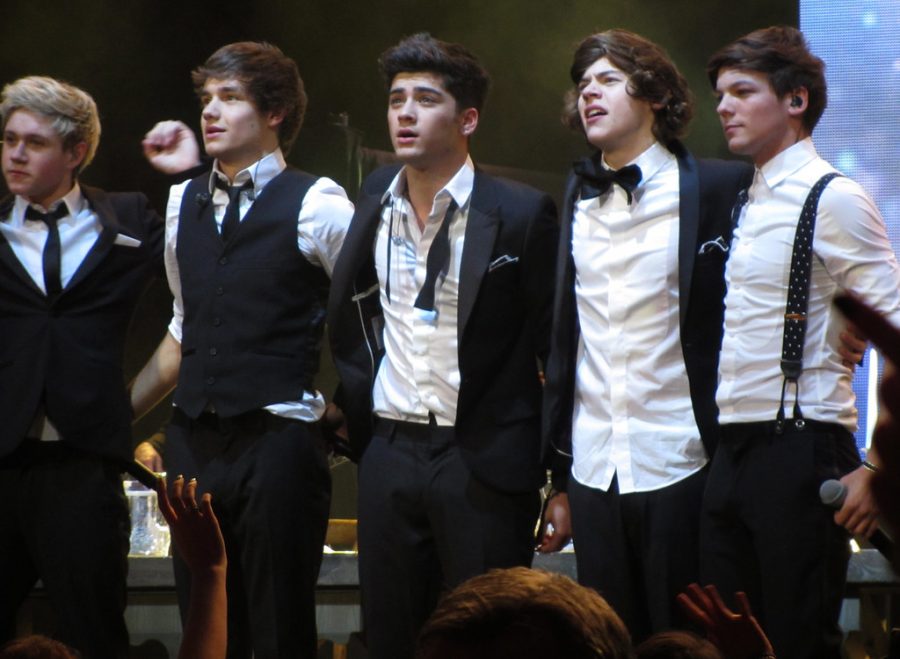 One Direction's music helped many nostalgic fans get through quarantine.

Six months of copious freetime and minimal human contact launched a personal journey of self-discovery through music. Starting quarantine in a whirlwind of uncertainty led me to somber playlists. I sought reassurance in uplifting songs, and ultimately turned to songs from my youth for a sense of comfort. In the end, artists’ own introspection has expanded my emotional depth.

Here is a playlist of 12 songs, in order of how they should be heard, that sufficiently impacted my personal philosophies this summer.

“BAD NEWS” by Aries
The quirky piano intro of “BAD NEWS” and its transition to a relaxed beat encapsulates the work of lesser-known artist Aries. The dazed nature of this disconsolate tune was well-suited for the blur of repeated nights in quarantine.
“Lion King On Ice” by J. Cole
J. Cole introduced an upcoming album, “The Fall Off,” by releasing a series of singles over quarantine. “Lion King On Ice,” one of the singles, describes the rapper’s difficult past and present successes. Set to a tame, almost R&B beat, this song exhibits a new endeavor for the hip hop artist. Cole stayed true to himself as he explored new sounds, and assured me the same could hold true for my own experiences.
“INDUSTRY GAMES” by CHIKA
I discovered CHIKA’s Tiny Desk Concert scrolling through Twitter, well worth the watch, by the way, and duly noted her spot on Obama’s Summer 2020 playlist. CHIKA speaks to her defiance of the superficial nature of the hip-hop industry, with lyrics like “Kill ‘em with kindness in sound, know I’m the tightest around.” Her tenacious confidence translates to this song both lyrically and rhythmically, in a contagious way.
“Underdog” by Alicia Keys
“Underdog” was released shortly before quarantine as a preview to Alicia Keys’ newest album, “Alicia.” The album itself was just released, and much like “Underdog,” it is divine. Soothing R&B tones, Alicia Keys’ angelic voice and lyrics advocating for those unnoticed by society make this song an always inspirational experience.
“No Scrubs” TLC
A classic feel-good song and a track anyone can dance to, “No Scrubs” is a go-to study song to uplift the dreary tone of online classes. When life feels somewhat stagnant, ‘90s R&B is always a good idea, and TLC is an even better one.
“There She Goes” by The La’s
To anyone looking for a background track to elicit the feeling of being the it-girl in a ‘90s teen rom-com, “There She Goes” is the song. Both nostalgic and invigorating, the euphoric conviction emanating from this song’s catchy lyrics and upbeat melody is unmatched.
“Rich Girl” by Hall and Oates
This classic will spark a head nod and a foot tap in any situation. Despite the critical content of the song’s lyrics, its upbeat nature and soft rock ambiance is sure to bring cheer and fond memories. For me, post-quarantine, those memories will consist of bonding with coworkers over intense jam sessions behind the counter at an ice cream shop.
“the 1” by Taylor Swift
Watching Taylor Swift evolve from Reputation-era to Folklore was one of few blessings during quarantine. As the first song on the album, “the 1” provides an introduction to Swift’s newest genre transition into folk-pop. Vaguely reminiscent of her 2012 album, “Red,” Swift fondly recalls the one that got away. Swift’s success across multiple musical genres reminded me that when feeling lost, passion should outweigh convention.
“If I Could Fly” by One Direction
As I wallowed in sentiment in my childhood home, I sought comfort in more stable times — namely, 2012. In honor of my 11-year-old self, my quarantine-induced rediscovery of One Direction and the 10-year anniversary of the band’s creation this past July, my favorite One Direction track had to make the list. “If I Could Fly” takes a sentimental turn for a 2010s pop group. Saturated with longing, the lyrics drew me into the comfort of emotional indulgence.
“California” by Joni Mitchell
This article could very well have been “Music By Joni Mitchell That Got Me Through Quarantine.” For the reader’s sake, I’ve consolidated my love for Joni Mitchell into a tribute to “California.” The folk-rock melody aligns with the intimate nature of Mitchell’s album, “Blue.” This love song to the Golden State satisfied a homesickness for a sense of normalcy felt by my quarantine self and inspired a need to escape to a far away place.
“Back In My Body” Maggie Rogers
While stargazing within the confines of a three person tent in the White Mountains, “Back In My Body” brought new meaning to the term “transcending.” On a road trip across the Northeast with two friends, its eerie melody and driving beat melted into long drives through the mountains. Even in a bustling city, the general otherness of “Back In My Body” makes for the ideal soundtrack to any life-altering decision.
“Fine Line” Harry Styles
“Fine Line” is the underrated title track of Harry Styles’ most recent album. The last track on a bittersweet breakup album, “Fine Line,” toes the line of happy and sad, much like my quarantine experience. An instrumental ensemble builds to a cathartic release for listeners, with Styles repeatedly belting a much needed phrase, “We’ll be alright.”