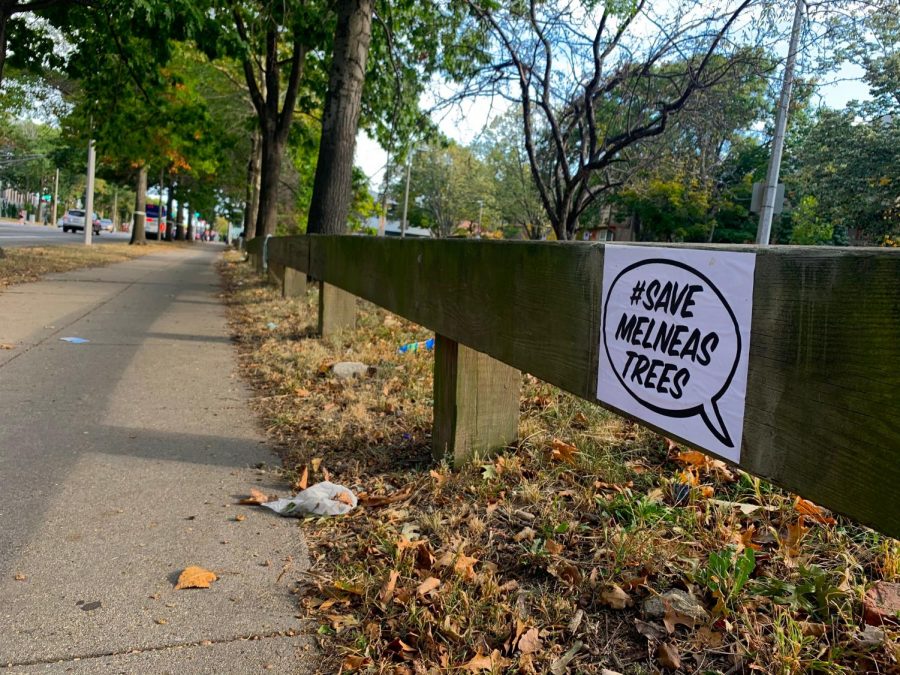 Many signs are posted along Melnea Cass Boulevard to spread awareness about the trees.

After a virtual conversation led by the Mayor’s Office of Equity and Inclusion, the Department of Transportation halted construction of the Melnea Cass Project, which involves the removal of more than 100 trees from the greenway in Roxbury, due to concerns regarding environmental racism and a lack of community involvement in planning.

For nine years, community activists have been pleading with the city to reconsider the federally-funded plans to widen the highway, alter traffic infrastructure and add bike lanes and pedestrian sidewalks. City reports alleged the tree removal is essential to build a “pedestrian friendly corridor,” but for many residents, the move to redesign Melnea Cass Boulevard is reminiscent of a painful gentrification project that wiped out entire blocks of Roxbury in the 1960s.

Forty years ago, the state seized several densely populated streets filled with homes and businesses with the intent to extend I-95 into Boston. After community protests, the city agreed to pave the impounded land with a tree-lined boulevard instead.

“The trees were planted in the 1980s to recognize that this is a community space, so to cut them down is reopening that scar,” said David Meshoulam, founder and executive director of Speak for the Trees, or SFTT, a nonprofit forestry initiative focused on urban tree equity.

Tree equity refers to the urban distribution of trees based on factors like race and socioeconomic status. Boston’s green space per resident is ranked among the lowest in the nation, and Meshoulam said that research done by SFTT has revealed that people of color have less access to green space.

Of the 515 trees currently providing shade for the community, the Melnea Cass Redesign Project plans to remove 105 trees, about half of which are considered mature trees. While the project also intends to plant 204 new trees, many residents and experts believe this to be insufficient.

“Environmental benefits are not linear,” Meshoulam said. “The benefits of a 40-year-old tree are orders of magnitudes more than those of newly planted trees. Tree mortality rates for new trees are also incredibly high.”

A mature tree canopy is essential for mitigating extreme heat and storm water and plays a key role in air detoxification and pollution control. Roxbury, a state-designated environmental justice community, experiences some of the most extreme hot spots in the city and has been disproportionately impacted by COVID-19 due to high rates of pollution-related illnesses, such as asthma.

Meshoulam fears removing the trees would only exacerbate these and other challenges, especially as climate change continues to bring more extreme weather. Sara Carr, assistant professor and director of the Masters in Design in Sustainable Urban Environments at Northeastern University, shares how nature can improve health.

“The ability to see green around you actually puts your mind at ease,” Carr said “Stress is the bedrock of a lot of other mental and physical health issues experienced by those in economically disadvantaged neighborhoods.”

Improving mental health through access to green space is a key principle of Dorchester-based nonprofit the Urban Outdoor Association. Co-founder Michelle Cook is a Roxbury native who remembers the community’s alarm when the highway project was proposed in the ’60s, just blocks away from her childhood home. As a passionate cyclist she rides her bike down Melnea Cass frequently, and while there is a need for improved safety, she said, it should not come at the expense of the community or the plant life.

Cook said the city has pitted two essential causes against each other: a safer road and bike route or a healthier, more green community. The problem is not just environmental, she said. It’s about the people and the process.

“I think there’s a lack of empathy for Black and Brown communities,” she said. “Or maybe they think Black and Brown folks don’t care about this, and that’s so far from the truth.”

Friends of Melnea Cass, the leading organization in advocating for the preservation of the trees for the past nine years, has a robust network of support from community members and local organizations who are passionate and knowledgeable about green space and sustainability. Their online petition has over 12,500 signatures and over 50 Boston organizations, including the Boston Outdoor Association and SFTT, have joined their coalition. Additionally, three city councilors have sponsored public hearings, said Kay Mathew, board member of Friends of Melnea Cass.

“We were heard. We just weren’t listened to,” Mathew said. “The city has known for nine years that nobody in our community wants these trees to come down.”

Cook expressed a similar sentiment regarding the city’s lack of regard for Black and Brown voices.

“We don’t have a voice,” Cook said. “And when we do get a voice, it’s someone who’s agreeing with the city. They may be a person of color, but they’re still not listening to what the community members need.”

Town hall meetings are frequently held at noon, when most residents are working. Additionally, Cook said, the community is usually not made aware of such projects, and if they are, it’s typically after decisions have already been made.

“In Black and Brown communities, we always feel like we’re being pushed out,” Cook said. “I want to see more of the actual residence there at the table to talk about why this doesn’t work for us.”

City officials declined requests to speak with The News, although their website says the project has temporarily been put on hold “until further community conversations and analysis of the impacts can be determined.”

“It’s great that we have a small victory, but a lot of things can be put on pause and then revamped,” Cook said. “Now we have to really put the work in. We’re not in the clear. Not by any stretch of imagination.”