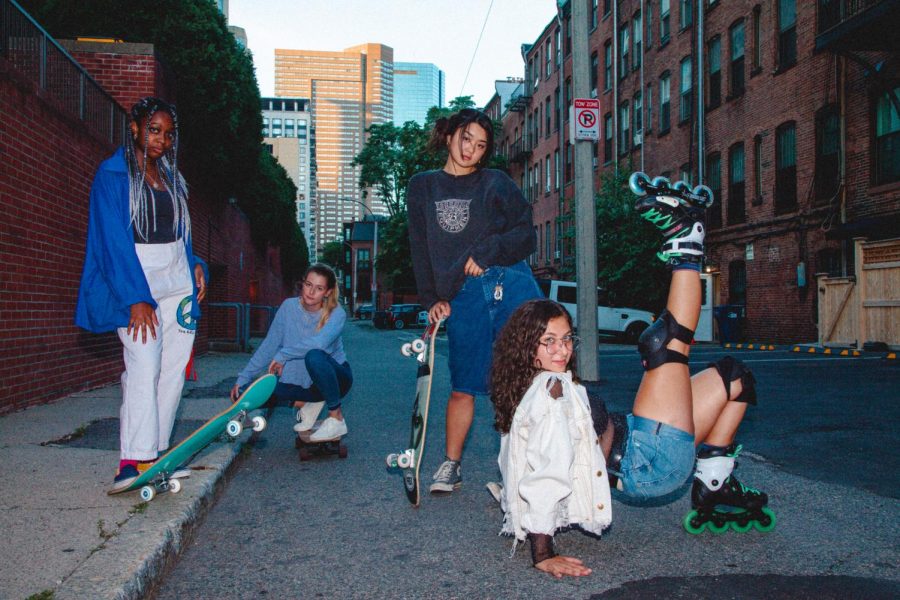 It’s no secret that skateboarding is exclusive. The skill itself is tricky to learn, and the sport has historically lacked diverse representation. For those who are not white, male or cisgender, it can be difficult to walk into a skate park. But a Northeastern-based group is trying to change this.

LonelyGrl Skate Co. is a Boston-based collective for marginalized skaters founded by Northeastern fifth-years Claire Lee, Rayven Tate and Becca Brichacek, who all have a passion for skating and bringing people together. While the collective only began in July, it has quickly cultivated a supportive community.

The founders of LonelyGrl sought to break down the skateboarding scene’s established barriers with their inclusive collective. According to the Public Skatepark Development Organization, only 23.9 percent of skaters are female. But LonelyGrl’s founders didn’t just want to tackle the issue of gender — they felt a need to address race, sexuality and location too.

“There are so many gaps in women’s skate collectives,” Lee said. “We wanted to take it a step further. We are solely defined by our marginalized population.”

The collective stresses the inclusion of BIPOC, or Black, Indigenous and people of color, as well as anyone who falls outside of the gender binary.

“[In skating], I didn’t see a lot of people who looked like me,” Tate said. “These other collectives were only white women in California. I was worried that I wouldn’t find a sense of community.”

Lee was the first to broach the idea of LonelyGrl. She had difficulties reaching collectives in skating epicenter California, since she was located in Boston. Frustrated with the lack of communication, she decided to take matters into her own hands.

“I started being very open on my Instagram about skating,” Lee said. “Rayven was one of the first girls to reach out and ask me [to teach her].”

Soon after, Becca Brichacek also reached out after seeing Lee’s Instagram. She cemented herself as the group’s photographer, and LonelyGrl was born.

Against these odds, the founders found power in their talents and support from one another.

“The actual act of learning to skate is so empowering,” Brichacek said. “When I fall, it’s so nice to have LonelyGrls there to pick me up.”

Lee, Tate and Brichacek cultivated a social media following by posting about themselves, drawing special attention to their message of community and inclusivity. Today, the LonelyGrl Instagram account has more than 2,000 followers, and Brichacek said that they are developing a website, too.

Social media has provided them with not only an audience, but a growing sense of community. Followers of the collective began to connect on Instagram and the online messaging platform Discord, planning one-on-one “skate dates” and events.

“It’s really cool to see friendships being fostered from a third-party perspective,” Tate said. “I feel like a proud parent.”

Although they had garnered a successful online following, the founders were unsure of what their first in-person meetup would look like back in August.

“We weren’t exactly sure what to expect,” Brichacek said. “We had amassed an Instagram following, but we were hoping that people would show up in-person with the same enthusiasm they had online.”

Their fears proved to be irrelevant. At their first Boston meetup in August, more than 60 LonelyGrls showed up. Among them was Joy Lustig, a fourth-year chemical engineering major who has found solace in skating.

“I was an ice dancer for 10 years,” Lustig said. “[It] wasn’t great for my self esteem in terms of comparison to other girls… There’s a number and a score to reflect that. There’s none of that with LonelyGrl. I’m in a great community of girls who want to support each other and learn.”

Attendees at the first meetup came with varying backgrounds and skill levels. While some, like Lustig, were experienced skaters, others were brand new.

“There were people at the first meetup that had never been on a board before,” Lustig said. “I’ve been able to use some of my knowledge from skating to teach others.”

Though LonelyGrl is primarily made up of skateboarders, those who  roller skate and rollerblade are welcome, too.Whether at an in-person meetup, a “skate date” or online, the message of LonelyGrl still stands.

“The [skating] industry is spoon-fed to cis men,” Lee said. “Breaking that barrier is very empowering.”