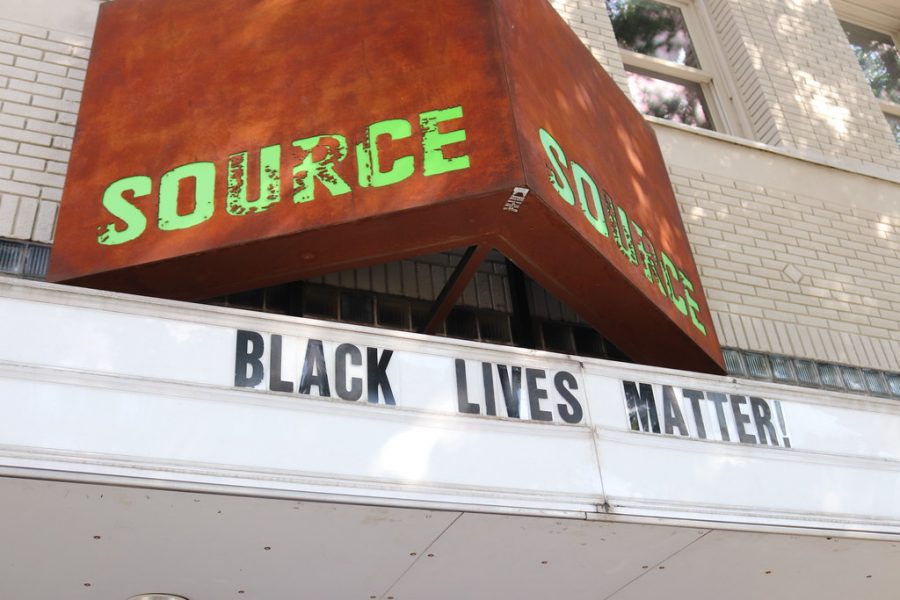 "07.FourteenthStreet.WDC.8September2020" by Elvert Barnes is licensed under CC BY-SA 2.0

Theaters in Boston stand in solidarity with the Black Lives Matter movement.

The response to George Floyd’s murder has reached far beyond police reform. Every aspect of our nation has been scrutinized, including the theater community. Here in Boston, theaters are actively taking steps to combat racism.

In the theater community, a revolution began with the release of “Dear White American Theatre” on June 8. In this statement, the #WeSeeYou movement, composed of BIPOC theatremakers, called attention to the systemic racism in the industry. Within 24 hours, their website received 80,000 visitors and their petition to demand change has now been signed by more than 100,000 people, prompting the theater community to take action.

At New Repertory Theatre, or New Rep, located in Watertown, the staff members have started to eliminate racism within their walls. Michael Bobbitt, New Rep’s first Black artistic director, is at the forefront of this mission. Prior to his arrival in 2019, New Rep had a diversity and inclusion segment built into their business plan, but it was not mobilized until Bobbitt led the way. Now, it has become the main priority.

“I just was really upset about how the world is, and, in many ways, I had had enough,” Bobbitt said. “Since I have a theater and a platform to make some things happen, I just felt this strong desire to just make it happen.”

His approach to anti-racism is to revamp New Rep’s governance and operations system, including marketing and financials. The New Rep staff are looking at their subscription packages and donor benefits to ensure that everyone is treated fairly. Bobbitt and his team have also implemented racism incident reports, which will allow New Rep to analyze the harm it causes. There is also a push toward 50% equal representation in all areas, especially the theater’s board.

“Some people will call what we’ve been trying to do innovative, but I think it’s just necessary,” Bobbitt said.

In Bobbitt’s eyes, there are two approaches to anti-racism. The first involves changing people’s hearts and minds, which will be a long-term effort. The second requires an examination of policy and culture, which is something that can be accomplished right now.

“These are acts of love. These are showing people that have never been loved by this country before, love,” Bobbitt said. “That is what’s motivating us. We want everyone to feel loved when they come to our theater, and sometimes we have unintentional policies that make people not feel loved.”

Central Square Theater, home to both Underground Railway Theater and The Nora, is promoting collaboration as a means of addressing racism.

Debra Wise, the artistic director at Underground Railway, said that the company’s anti-racism plan started with a series of three staff meetings. At these meetings, they read about the characteristics of white supremacist organizations and discussed how the company was lacking in their anti-racist stance. This sparked a community effort across theater companies in Boston to hold each other accountable.

Theaters are looking at each other’s anti-racism strategic plans and using them to inspire their own ideas. This week, Central Square Theater will examine New Rep’s plan for ideas and see what is possible within the bounds of their own resources.

At Central Square Theater, they have established an anti-racism coordinating committee, which evaluates the statements the company puts out. Wise acknowledged the collaboration required from all sides to make these changes happen.

“We’re trying to be very inclusive and democratic about this process,” Wise said. “It’s a really interesting process that encourages us to look at every aspect of our work even though what we’re really talking about is anti-racism.”

Silver Masque, a student-run theatre group that aims to highlight students’ original work, is taking a serious look at what it has done wrong in the past, said Lina Lahlou, a fourth-year communications and media and screen studies combined major and the diversity and inclusion director of Silver Masque. After Silver Masque shared a social media post about donating to Black Lives Matter and other anti-racist organizations this summer, they received some backlash. Students came forward about diversity issues within the club, which led to the release of their own anti-racism action plan.

“It was very much a wake-up call. It was like, ‘Oh God, we’re doing things very wrong. We need to fix this.’ And that would not have happened if we hadn’t gotten criticism,” Lahlou said. “It’s very much thanks to our community, and I never want to take credit for something that they made.”

For Lahlou, it took her years to get into theatre because she did not see anyone like her onstage — and she is not the only one with this experience. This is why it is necessary for theatre to help mold a new normal of representation and inclusion, she said.

Silver Masque is also implementing ways to leave anonymous feedback and opening up their executive board meetings to the public to promote transparency.

Theater companies are learning to examine their inner workings and change for the better.

“As artists, we need to keep looking at how to be our most authentic selves and bring those selves to the process of evaluating our profession, as well as creating artwork,” Wise said. “And it’s not easy, because it calls into question so many things, but one thing that’s clear to me is that theater is not going to solve all of our ills, because theater is part of a much larger picture.”Rachel Erwin can be reached at [email protected].