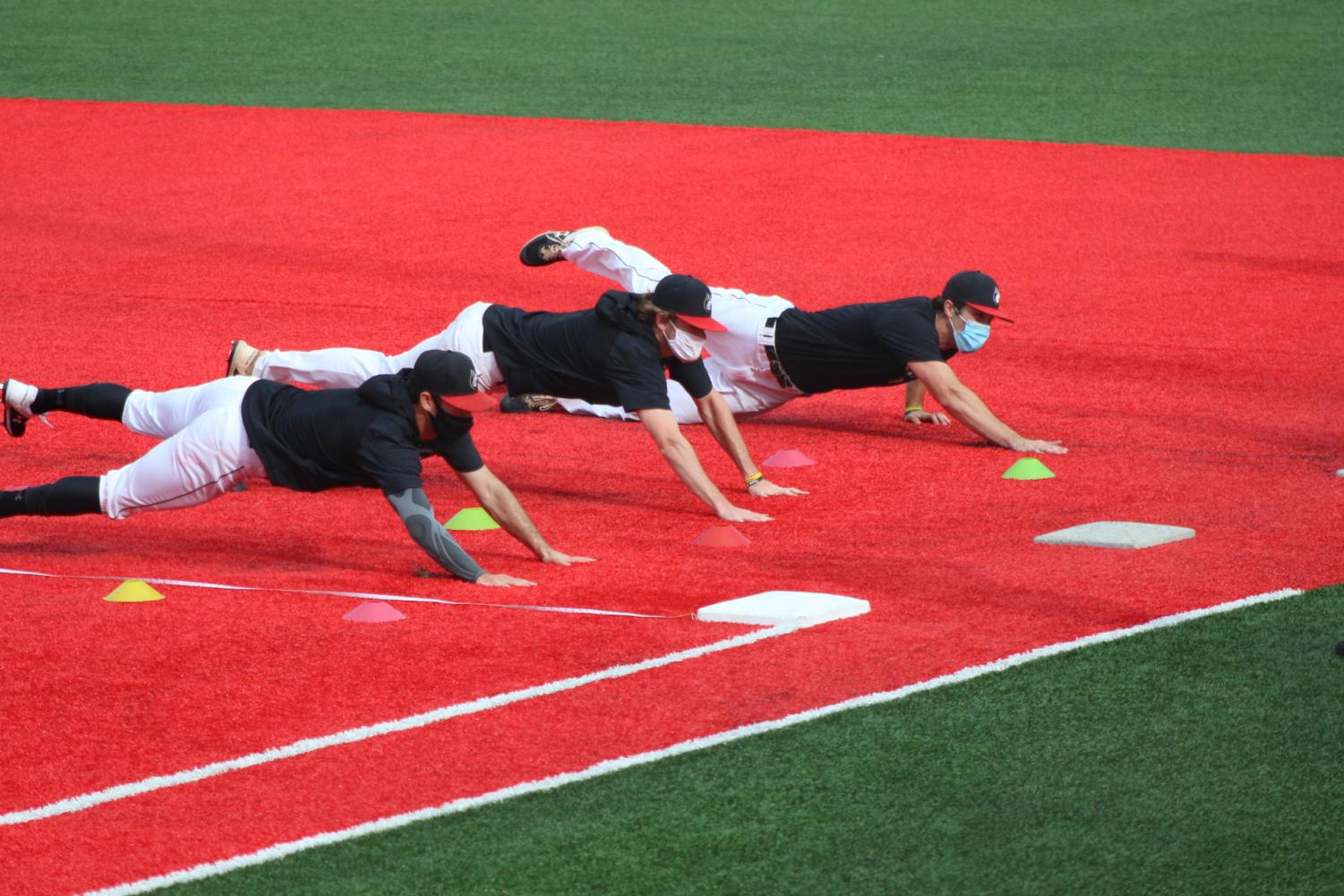 Infielders dive back to first at practice on Parsons Field. (Mike Puzzanghera)

Infielders dive back to first at practice on Parsons Field.

The last time the Huskies stepped foot on Parsons Field was a Mar. 11 win over Hartford. More than six months after their 3-1 victory, Northeastern baseball is back on the diamond.

The team returned to practice Sept. 19 for the first time since the spring NCAA season was suspended and later cancelled due to the COVID-19 pandemic. Though the practices look different with health and safety restrictions, the team is in consensus: It’s good to be back.

“It was just great to see them all out there, great to hear all the sounds of a baseball practice again — the crack of the bat and the glove, the throwing, the running and everything,” said head coach Mike Glavine. “We just had a blast. To be honest with you, it was almost like we never left.”

The team is currently practicing in small groups, with players split up by position (i.e. infielders practicing with other infielders). All personnel are required to wear masks, and they are staying six feet apart whenever possible.

Players are not allowed to share equipment or water bottles, and the team has alcohol wipes and hand sanitizer on hand at the field.

Despite the new protocols, redshirt junior infielder Ian Fair feels as though it’s just like normal.

“Wearing the mask on the field is definitely taking some getting used to. But aside from that, I mean nothing’s changed,” Fair said. “It’s still the same game, still the same guys.”

Glavine commended the team’s drive to get back to work and their commitment to all the changes from a normal practice.

“I thought they’d have a harder time practicing with masks on and they have, but they’ve done great with that,” Glavine said. “Visually, you might see some differences, certainly. But from an attitude standpoint, and already, a performance standpoint, it doesn’t feel as different as you’d think.”

Baseball being back in Brookline isn’t just a boost for the players physically, but also mentally. Redshirt senior infielder Scott Holzwasser said returning to baseball helps to take his focus off everything else going on in the world.

Fair said that just being on the diamond is a “getaway.”

“Whether it’s going down to the field, taking ground balls, playing catch or running, whatever it is, that’s the best part of my day, and I think that’s probably the same for most guys on the team,” Fair said. “It just takes your mind off everything.”

And it’s not just the players that receive those mental benefits.

“Even for the coaches, we feel the same way they do, the same emotions, so it’s great for us to be out there mentally and physically and get recharged,” Glavine said.

Spring seasons weren’t the only ones cancelled — many collegiate summer leagues did not play this year. The Cape Cod League and the New England Collegiate Baseball League both did not play, and the Futures League and the new Newport League had shortened seasons.

In a normal summer, these leagues are full of college players not only from New England, but also from around the country. In 2019, Northeastern sent 19 players to summer league teams.

Instead of playing summer ball, the players took the time this summer to make adjustments and changes to their game so that when baseball came back, they’d be better than ever.

Holzwasser was lucky enough to get a summer season in the Newport League. He made sure to capitalize on that opportunity, winning the league’s MVP award after hitting .460 in the summer.

“I’d say it was kind of fine-tuning changes that I made not this summer, but the one before,” Holzwasser said of the work he did this summer. “Just kind of keeping my hands up in the box and staying balanced and on time. So it’s sort of like a stance switch that I was using this last spring.”

Fair didn’t have that same luck. Without a summer season, he took the time both to improve in the weight room and address areas where he struggled in the spring, namely hitting with two strikes and hitting the inside pitch.

“I had a ton of free time, so I was hitting several times a week. I had a few other guys who weren’t playing summer ball too, so we got together every few days or so and we hit off the machine together,” Fair said. “I would’ve rather been playing, but it was nice to really focus on the individual aspects that you don’t really get to as much during the season.”

The Huskies played 15 games before the cancellation in the spring, finishing with a 10-5 record. Given such early success, the swift end to their season was even more painful to the team.

Glavine received the news first, giving him the tough task of breaking it to the rest of the team. He texted the team immediately and called a meeting in the Cabot Center.

That uncertainty about the seniors was soon cleared — the NCAA granted an extra year of eligibility for players with seasons impacted by the pandemic. Because of that, Northeastern is retaining a higher percentage of its roster than it would in a regular season.

Retaining that many players from last year seems as though it will be a boost, since team members said the squad just clicked both on and off the field. Glavine said last season’s team was very close with each other. Fair said they knew they would have done some big things last year if the season wasn’t cancelled. Holzwasser described that team as “super special,” similar to the team from his sophomore year.

“It just had that competitiveness, but at that same time a family environment,” Holzwasser said. “We knew how to have fun in practice, but also stay focused, because we had a job at hand. I think it’s going to be that same way [this year].”

The status of the 2021 season remains up in the air — even the status of practicing could be subject to change. But Glavine said the team and the staff are remaining “cautiously optimistic.”

“We’re enjoying it every day,” Glavine said. “We know things can change at a moment’s notice. All we’re promised is what we have today, we don’t know what tomorrow brings.”

Fair and Glavine both said they’re hopeful that they can soon move into full team workouts and practices, which Glavine said could start as early as October if testing continues to go well with not just the team, but the university as a whole.

But that all remains uncertain. What is clear is that small group practices are back — and that’s more than okay.

“It was a great first week, and we had good weather,” Holzwasser said. “I couldn’t ask for anything more than that.”