Column: Columbus Day was always racist and must be replaced 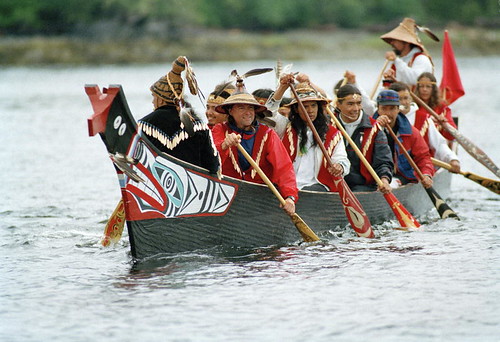 "International Year of the World's Indigenous People, 1993" by United Nations Photo is licensed under CC BY-NC-ND 2.0

In 1492, Christopher Columbus sailed the ocean blue. He had three ships, colonized the Americas and murdered millions of Indigenous people, too. You’ve probably never heard that version of the nursery rhyme in school.

As of 2019, at least five states and several cities now recognize Columbus Day as Indigenous Peoples’ Day. Only this year did Northeastern officially announce that the university will acknowledge the holiday as such. It is time for the rest of the United States to follow in these footsteps.

Studies show that European colonizers like Columbus brought violence and diseases that killed 90 percent of the Indigenous population in the Americas. His crew documented Columbus capturing a woman and giving her to his crew to rape. Columbus enslaved Indigenous people, trafficked young girls and initiated the Atlantic slave trade. These are only a few of the horrifying acts committed by Columbus, yet the United States still honors him hundreds of years later.

U.S. education tends to sympathize with European colonizers like Columbus by downplaying their actions, which misleads students about the horrors of the country’s past. Although students are taught that Columbus “discovered” the Americas, Columbus did not discover anything. Rather, he stumbled upon land already inhabited by Indigenous people and subjected them to murder and servitude.

We must learn from history to avoid making the same mistakes as Columbus, but that does not mean we should glorify him. Renaming Columbus Day is not enough; we must honor Indigenous people by replacing it entirely. Indigenous Peoples’ Day should be completely severed from Columbus’ name and what he stands for.

Similarly, this logic applies to honoring the Confederate flag, which symbolizes Confederates’ support for slavery. Today, there are still more than 1,500 Confederate symbols in this country, so if you are not racist, why support the flag?

Both of these historical examples show that if the United States wants to truly condemn its racist past, it must stop glorifying racists. Tearing down every Confederate symbol and renaming every city that honors someone racist is not practical — so what should we do?

The answer is in plain sight: we must improve history curricula. Educators must stop teaching whitewashed history and downplaying atrocities committed by people like Columbus. Rebranding and replacing Columbus Day requires us as a country to learn about the awful things Columbus did and honor the Indigenous people he stole so much from.

We should not ignore Columbus’ actions, but recognizing them does not require us to honor him. Columbus Day glorifies a man who initiated millions of murders, raped women and began chattel slavery. Instead of honoring Columbus, we should learn about Indigenous cultures, the lasting effects of the Removal Act of 1830, listen to the concerns of Indigenous activists and more. As a country, America can recognize the legacy of Columbus in a way that uplifts Indigenous people. Each year, more institutions recognize Indigenous Peoples’ Day, but true action would be for the federal government to acknowledge it as a national holiday.