This November, Massachusetts has the opportunity to pass ranked choice voting. Let’s get it done. 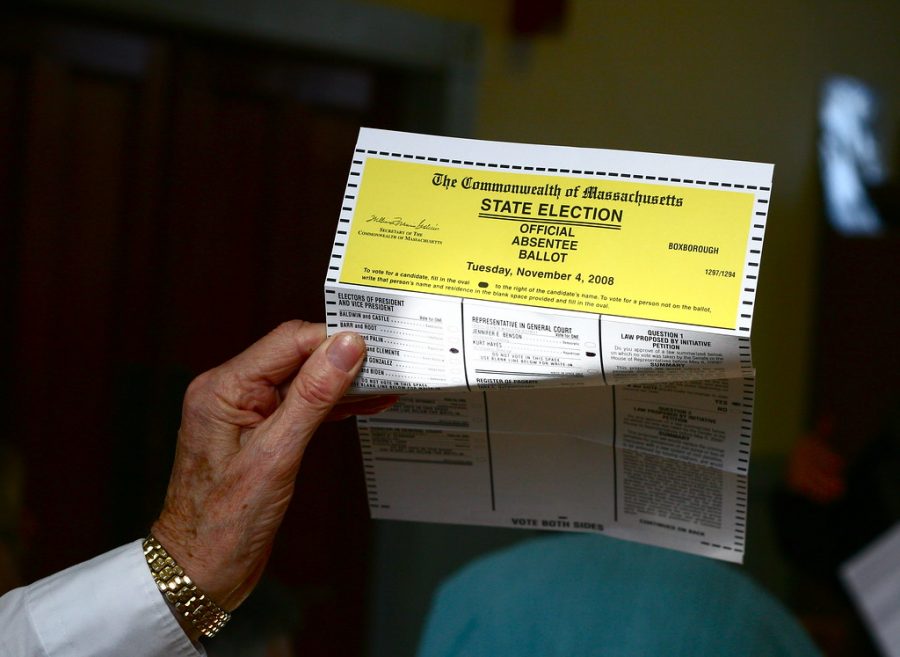 "absentee ballot" by Muffet is licensed under CC BY 2.0

Question 2, or ranked choice voting, will be on the November Mass. ballot.

From 29 candidates in the Democratic presidential primary to nine primary candidates in our very own Massachusetts 4th Congressional district race, 2020 has been a year of bloated races and overwhelming election cycles. With another presidential election coming up between arguably two less-than-ideal candidates, it’s understandable that so many feel disillusioned with the two-party system.

Luckily, for those of us in Massachusetts, we have more than just Joe Biden and Donald Trump on the ballot this November. We get to cast our voices in a proposed upgrade to our elections themselves: ranked choice voting or RCV.

What is ranked choice voting? Well, the name pretty much says it all. You get to rank your choices on your ballot, instead of having to choose just one. Below is an explanation on how it works, taken directly from the Yes on 2: Ranked Choice Voting website:

1.   “First, all the first-choice votes are counted, and if any candidate has a majority (more than half) the votes, that candidate wins, just like in our elections right now!

2.  “Otherwise, the last-place candidate (with the fewest votes) is eliminated. Any votes cast for that candidate are instantly transferred to the next preference indicated on each voter’s ballot (if the voter chose to rank more candidates).

3.  “After each round of counting, we check again to see if any candidate has won a majority. If not, step 2 is repeated until one candidate achieves more than 50% of the vote and wins.”

The concept is relatively simple. But you may be wondering what’s the matter with the current voting system? There are a number of problems with simple-majority elections — most notably, its failure to capture the nuance of voters’ preferences. That’s where RCV comes in.

First, far too many times we’ve seen someone in a big field of candidates, particularly in a primary, win with only 30, 20 or even 10 percent of the vote, simply because the remaining votes are split among different candidates.

Sen. Elizabeth Warren gives an excellent example of this in a Boston Globe opinion piece where she penned in support of RCV. She gives an example of a race where a town “[prefers] to elect identified environmentalists to their town council, and a dozen environmentalists might show up to vie for that spot — but as the green dozen divides up the majority of votes, a single pro-fossil-fuel candidate who stirs up anti-environmental sentiment could win with only a small fraction of total votes cast.” In our current simple-majority system, some candidates win elections despite being the last choice of most voters. For this example, with RCV, the majority sentiment in support of an environmentalist candidate would likely prevail.

Second, studies about ranked choice voting have found that it leads to less negative campaigning and more positive election cycles overall, something we could sorely use right now. Instead of creating toxic environments to pull as many voters as possible, candidates can focus on positive coalition politics, appealing to the second and third choices of their opponent’s supporters rather than exacerbating divisive issues. Playing electoral math and battling it out for the last vote would be out of the question, and candidates will have to run on the issues that matter to and benefit the most number of people.

Finally, under ranked choice voting, we can kiss the “spoiler effect” goodbye. RCV allows us to vote for who we really want, without settling for the “lesser of two evils.” Instead of picking between principles and pragmatism in a “lose-lose” scenario, we rank them both above our last choice, in the order we choose. RCV also allows for more diverse candidates and gives smaller parties the opportunity to participate in our democracy without fear of “splitting the vote” or being shamed as “spoilers.” We get to vote for who we want to win, instead of just voting against who we don’t.

Ranked choice voting will be Question 2 on the back of your November ballot. If it passes, we can have more productive campaigns, more diverse candidates, more democratic elections and more representative elected officials.

If that sounds as good to you as it does to me, I urge you to vote yes on ranked choice voting in Massachusetts this election. Maybe we can finally elect a candidate that the majority of us truly support.

Jacob Kemp is a second-year political science major. He can be reached at [email protected]