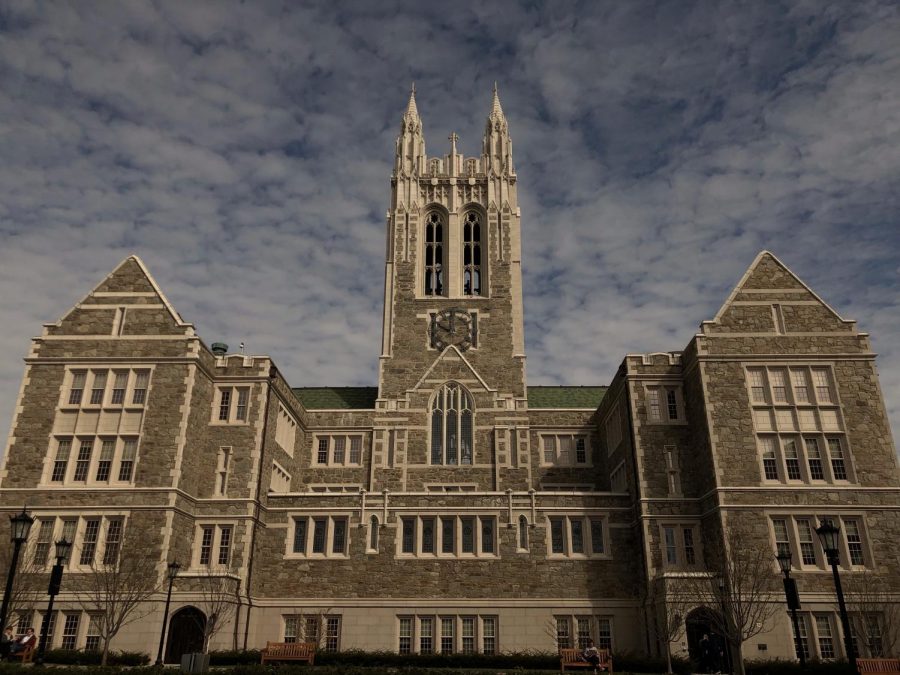 Gasson Hall on the campus of Boston College.

A recent COVID-19 outbreak at Boston College in Newton, Massachusetts has left both students and neighboring residents skeptical of the college’s ability to implement effective pandemic protocol. Students were not informed of the swim-team-driven outbreak from the administration, but instead from the media.

The week after Labor Day weekend, 73 students tested positive for COVID-19. The rates have steadily declined since, but the university still reported 177 positive cases through Oct. 1. Students said this outbreak is not entirely due to not-so-socially-distant gatherings as the college claims, but is a repercussion of fall sports ensuing amid the pandemic. Along with their feelings about the sudden outbreak, students are equally as upset about the college’s shortcomings in terms of both communication and insufficient volume of testing.

“I was actually tested on Monday, [Sept. 14]” sophomore Ted Park said, “and that was the first time in 30 days that I have been tested.”

Students who are working while taking classes, and therefore exposed to the virus that much more, are also finding themselves in a bind when it comes to securing a test.

“People who work at our gym, like lifeguards, or people who do trainings or even just the desk stuff were supposed to get tested once a week, and a lot of them haven’t until they’ve had to fight for tests,” sophomore Lily Carlson said.

The lack of contact tracing and communication between the administration and students has also caused commotion. Although this may be in the pursuit of limiting panic, students are upset about being left in the dark.

Park seconded the unsettlingly nonchalant nature of the email he and his classmates received ensuring students’ safety on campus despite the outbreak. The numbers contradict the administration’s unconcerned claims, leaving students pleading for more.

This lack of testing and communication has also made students and residents question the necessity of the fall sports that sparked the outbreak. To many, Boston should  hold off with athletics, similar to neighboring schools like Northeastern University, Harvard University and Boston University.

“I personally have a friend, a sophomore, two or three people on her floor tested positive for Corona,” Park said. “They are on the swim team at BC, and she wasn’t notified, and neither was her RA, or any of the students, and they haven’t been tested yet.”

The swim team is just one of many ongoing sports that students are worried about.

“The football team [still traveled] to Duke to play,” Carlson said. “That makes me a little nervous, especially because I know there are people in our building who are on sports teams, so from the sports perspective I’m a little nervous.”

In regards to safety inside the classroom, Brookline resident Raphael Lewis expressed his concerns about the college continuing their hybrid in-person/remote learning plan. As it is, students are able to take classes both in-person and online, another facet of the school’s pandemic regime that has people questioning its rigor.

“They should strongly consider going virtual until they can get this under control,” Lewis said.

In addition to athletics and academics, many believe the college’s overall priorities should be re-evaluated. As a well-funded private institution, some think the college should utilize its resources to benefit the safety of its students.

“BC has some money,” Lewis said. “Take care of the important stuff first.”

Students and neighboring residents are relieved that Gov. Charlie Baker has stepped in and taken charge. In reaction to the college’s outbreak, public officials from Newton and Boston have taken control of contact tracing while firmly pressuring the college to promote testing for students.

The college has recently taken steps in the right direction since the outbreak in September. Tom Keady, vice president of government and community affairs at BC, laid out changes the college has made in response to the outbreak, specifically regarding off-campus students, in a virtual meeting held on Oct. 5.

“We have changed, especially during the month of September with off-campus students if they were tested positive,” Keady said. “Originally, they were going to be going back to their apartments, and we made a change to house any students who tested positive who were living off campus. I think that was a good decision.”

As much as some students are frustrated with the administration for its underwhelming protocols and lack of communication, much of their fears are rooted in the possibility of being removed from campus again.

“We just love it here and we want to stay here, but we want to make sure it’s safe for everyone involved,” Carlson said.