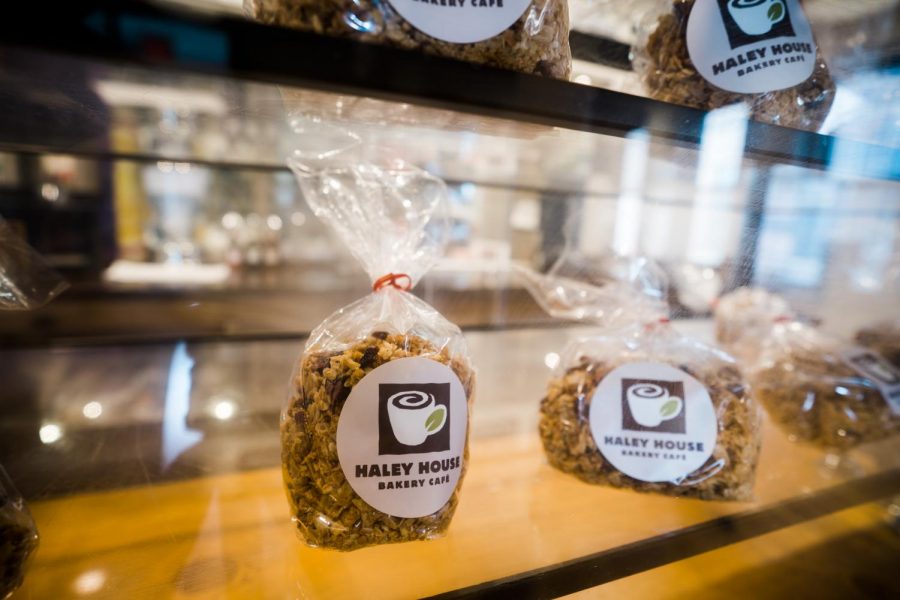 Haley House was founded in 1996 and is located in Roxbury's Nubian Square.

At Haley House Bakery Café, the mission is simple: food with a purpose.

“We are not a traditional cafe that operates [where its] main mission is to drive revenue,” said Thomas, who started as general manager in October 2019. “We look deeper at the social impacts. We look to partner more closely with neighborhood organizations and neighborhood initiatives as much as possible.”

Founded in 1996, Haley House’s mission is to use “food with purpose and the power of community to break down barriers between people, empower individuals, and strengthen neighborhoods,” according to their mission statement.

In 2019, Haley House shut down to restructure its operations. At the café, Thomas said she and her team, including chef Alima Mbabazi, restructured the menu to highlight the cultural diversity within their community.

“After I started last October, we’ve kind of solidified our culinary model as one that celebrates and embraces the culinary contributions of cultures in the African diaspora as well as [the] indigenous diaspora,” Thomas said.

While Haley House was shut down, Thomas, Mbabazi and the rest of the team took a step back, considering ways to innovate the menu and provide fresher ingredients. With their customer-favorite Nubian Square sandwich, they took the sandwich, which has jerk chicken, ginger coleslaw, chipotle aioli, cheese and greens, and put it on a chapati — an Indian flatbread that is a staple in Tanzania, where Mbabazi hails from.

Thomas said another popular item has been their sambusas, deep fried pastries filled with chicken, lentils or red red, which is a traditional Ghanaian dish with stewed black-eyed peas and tomatoes.

With COVID-19, Haley House Bakery Café was forced to pivot some of its operations, like its transitional employment program. Thomas explained that the program takes in people who were incarcerated, have a record or some barrier to getting employed and trains them. Although the program is on hold, she added that they are still doing their best to “remain diligent in terms of how we can bridge certain gaps in work [and] help people support themselves.”

“We have some people that sit in that category or have had difficulties with law in the past,” Thomas said. “We don’t look at those types of details. We just hire for the person’s personality, and we just work with people from there.”

Another program on hold because of the coronavirus pandemic is Take Back the Kitchen, where Thomas said they taught cooking classes to neighborhood kids of all ages in partnership with Boston Public Schools and other charter schools. Programs like these, Thomas added, go hand-in-hand with Haley House’s mission of food with purpose.

“[Haley House] was very grassroots in its origins,” she said. “It’s always kind of traditionally been a space where we created and fostered an environment where anybody has ideas around that mission can come in with their definitions and propose things.”

Even with COVID-19 and its changes in operations and prior initiatives, Haley House is still just as involved in its community.

Haley House hosted an art exhibition in partnership with Artists for Humanity Oct. 24. Throughout November in honor of Native American Heritage Month, Thomas said they also will be holding space for Native American people and “acknowledging the work it takes to decolonize the food industry.”

Ultimately, as a social enterprise, the purpose of Haley House beyond food is to serve the people in the Nubian Square community.

“It really is about the people. It’s not about the dollars,” Thomas said. “But we’re also trying to make it so that economic empowerment is a big deal, especially for communities of color or disenfranchised people in general.”