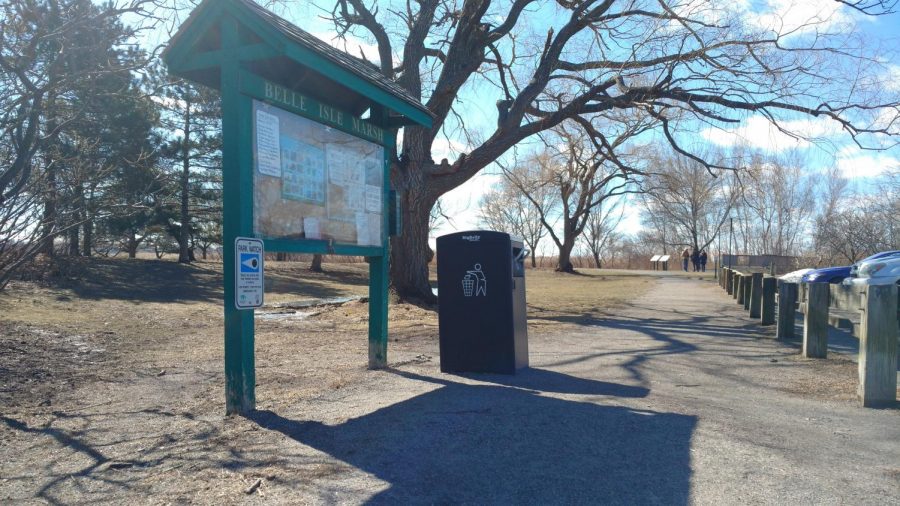 The entrance to the Belle Isle Marsh Reservation marks the last remaining salt water marsh in Boston. Members of the PUEBLO coalition worry that development will bring more visitors than the marsh can handle and that the plans don't account for the natural movement of the marsh.

Now that the process has begun moving again, organizations opposed to the project are working to adapt their protests to a virtual format.

Located along the Blue Line in East Boston, the Suffolk Downs property long held a race track before it was sold to the HYM Investment Group, the project’s developer, in 2017. They proceeded to propose a redevelopment plan that would include housing and shopping areas.

The planned changes to the 161-acre site were appealing to some, but to the People United in East Boston for Liberating and Organizing Coalition, or PUEBLO, the proposed plans didn’t measure up to expectations. Their biggest concerns about the redevelopment surround its environmental impact and lack of housing for working-class residents who currently live near the site in East Boston.

The PUEBLO Coalition is also looking for commitment from HYM to make parts of the project have net zero emissions and take steps to consider the nearby Belle Isle Marsh, the last remaining salt marsh in Boston.

When the pandemic effectively put the project on hold, the public review process was halted for four to five months, said Raul Duverge, BPDA senior project manager for the Suffolk Downs development.

The pandemic also caused the PUEBLO Coalition to switch their attention to helping members of the community, which slowed down their actions in opposition to the Suffolk Downs redevelopment.

Thiruvengadam said that Eastie Farm has been doing prepared food delivery, produce delivery and food pickup sites to help with food security in East Boston since the start of the pandemic.

Stephen Mahood, member of the East Boston Democratic Socialists of America and PUEBLO, said he feels they had to step up where the city didn’t.

“[Organizing] mutual aid, getting food, getting support to the families that live here that were hit hardest at various points through the pandemic, and that took a lot of time and resources away from being able to focus our time and energy on the Suffolk Downs fight,” Mahood said.

Earlier this year, PUEBLO members GreenRoots and City Life/Vida Urbana filed a Title VI complaint claiming the Suffolk Downs review process was not accessible to non-English speakers. Mahood said he was hoping the delays from the pandemic, along with that complaint, would slow the process for longer, perhaps up to a year.

“Not to put too much on hope, but it’s just because we’re doing so much more,” Mahood said. “We’re trying to facilitate getting literally food to families that were starving.”

But in June, the BPDA shifted their process online in response to social distancing measures. Then, in August, the U.S. Department of Housing and Urban Development, which oversaw PUEBLO’s Title VI complaint, signed off on the project, as long as the BPDA made their process more accessible to Arabic speakers.

The BPDA held three virtual meetings in August — with simultaneous interpretation in Arabic and Spanish — to complete the approval process.

Then, after a meeting on Sept. 24 that stretched more than six hours, the BPDA Board approved the project.

Members of the PUEBLO Coalition worry that the meeting, held virtually over Zoom, left out voices.

“It was done as if it were a webinar, so none of us were able to see who else was in the room, whereas when we’ve gone to BPDA meetings in the past we’ve been able to sit next to each other and talk and converse about what was going on, or raise questions as a group, or whatnot, and just show our presence by force,” Mahood said. “In this case, we had no idea who was in the room unless we happened to coordinate it.”

Thiruvengadam said he wasn’t able to give simple feedback to help people join the call to give comments.

“Even if you wanted to be helpful to them you couldn’t do that because everyone was shut off and if they gave you a chance and you spoke for two minutes,” Thiruvengadam said.

Duverge, who has managed projects with the BPDA for years, said that he saw little difference between the virtual board meeting and in-person ones he’s been to in the past.

“We’ve had to certainly adjust,” Duverge said. “And when you’re working using these virtual platforms, there’s always some issues that pop up and we do our best to manage them. But I would say overall, the format, we kept it as identical as possible to an in-person meeting.”

To Thiruvengadam, however, the differences are stark.

“This wasn’t a public meeting,” he said. “If this is the new definition of public meeting, then we’re living in a different world, in terms of civil rights.”

But with approval from the BPDA board and the Boston Zoning Commission on Oct. 21, the project is ready to move ahead.

HYM, the project’s developer, wants to start working on the first phase of the project in the beginning half of 2021, said HYM Managing Director Tom O’Brien.

For PUEBLO, their work toward further environmental protections and quantities of affordable housing goes on. Mahood said it is a “20-year fight.”

“This [approval process] is the larger project, as the different phases go up for approval, we will try to actively be there,” Mahood said.

Duverge said that he appreciates the PUEBLO Coalition’s concerns that led to the level of affordable housing currently involved with the project — $5 million to an East-Boston-based housing stabilization fund to create more affordable units offsite, in addition to the 13 percent of onsite units required by the city. Hehopes there is opportunity to address further concerns, but thinks they can only go so far.

“There comes a breaking point for these projects, it’s just a financial reality,” Duverge said.

But the PUEBLO Coalition will keep working for more affordability and environmental protections at Suffolk Downs and other projects across their neighborhood.

“Don’t ever knock us down, because we’ll keep fighting and whatever we have to do to get what we need, we’ll keep pushing it,” Mahood said.