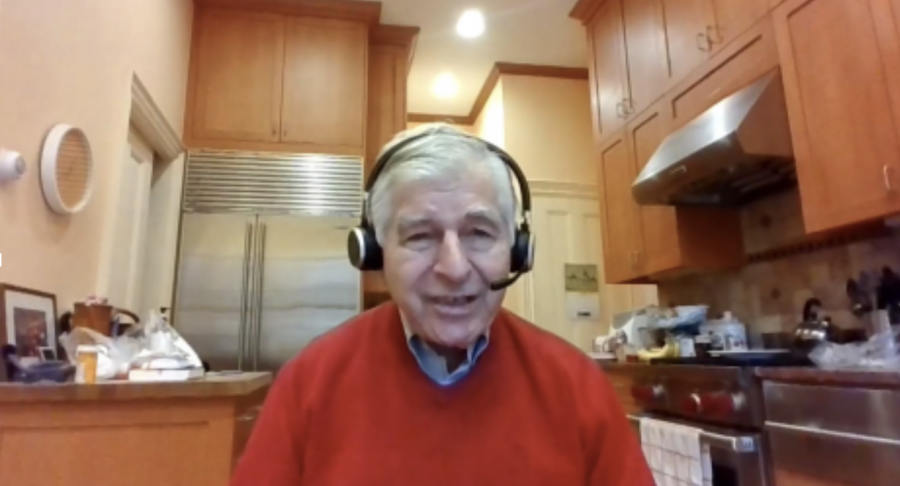 Former Massachusetts Governor Michael Dukakis analyzed the recent presidential election and its impact on the future of the nation in a virtual conversation hosted by Northeastern alumni relations Thursday afternoon.

Gov. Dukakis, the 1988 Democratic nominee for president and a distinguished professor emeritus of political science at Northeastern, discussed his hopes for the country’s future as he explained his thoughts on President Donald Trump, President-elect Joe Biden and the state of our democracy.

Dukakis began the discussion by addressing the elephant in the room: President Trump’s refusal to admit defeat and concede an election that multiple outlets have already called.

“It’s clear that [President Trump’s] a strange guy, and his handling of this defeat – and make no mistake about it, it’s a defeat – is strange,” Dukakis said. “You have to be a grownup in politics. When you lose, you have to handle it with maturity and a certain amount of grace. Trump doesn’t understand that, and now we find ourselves in this strange limbo period.”

President-elect Biden has continued with his transition despite being blocked from intelligence briefings that those in his position would traditionally receive. Despite this, Dukakis said that there should not be a significant concern about the transition, as the denial we are currently seeing from President Trump and some Republicans will cease in the coming weeks, but is “unfortunate.”

Dukakis declared his opposition to the electoral College, finding flaws in a system where the candidate who wins the popular vote doesn’t necessarily win the presidency.

Citing previous eras of political and social unrest such as the Civil War and McCarthyism, Dukakis emphasized that our country has persevered through difficult periods by compromising. He warned that romanticizing past political civility is a mistake, explaining that Americans have long battled fiercely over domestic divisions.

“In the end, it was the Senate, including its Republican members, who voted to censure McCarthy, one of their fellow senators, and basically ended his career,” Dukakis said. “We don’t have this group of what we used to call ‘thoughtful Republicans’ or ‘liberal Republicans’ in the Senate like we used to, the six to ten senators who would work with the Democrats to pass progressive policies.”

Dukakis felt that there was a dire need for Biden’s leadership in a time when the country faces so many challenges — the principal being the pandemic. One of Biden’s challenges will be sitting down and compromising with Republicans, many of whom claim that the election is not over yet. Still, Dukakis predicts that Biden, a “consensus builder,” will receive Republican support when it comes to the coronavirus.

“The American people, by a very substantial margin, have defeated a very dangerous guy, and I hope, have set the stage for getting us back on track with a national administration that is honest, is hard-working, is competent and can do the job both at home and abroad,” Dukakis said. “We have a right to expect that of our president and our executive branch.”