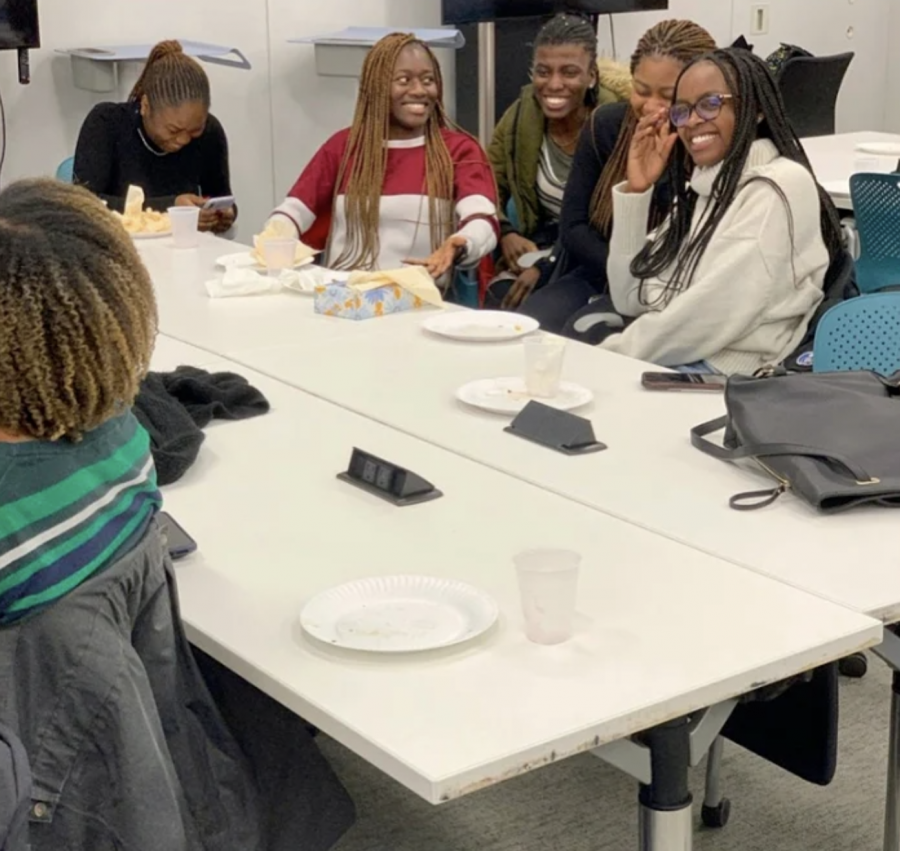 One of BBOSS's meetings from last semester.

In January, the Northeastern Black Business Oriented Student Society, or BBOSS, held its first ever general body meeting. Since then, the organization has provided opportunities, information and a community for Black students at Northeastern to explore the field of business.

BBOSS was co-founded by president and fifth-year business administration major Michelle Iwueze, third-year business administration major Arlen Agiliga and third-year industrial engineering major Olanrewaju Abdul-Hakeem Oloritun. Oloritun, who serves as vice president of external affairs, was first inspired to join by his experience attending a conference on private equity and wanted to explore that at Northeastern.

“I looked at clubs at Northeastern where I could explore [private equity], but not only did I want information, I also wanted more so a community,” Oloritun said. “I wanted to create that home away from home kind of feeling.”

The organization aims to provide members with the resources that can help them gain a foothold in the field of business. The club is especially targeted toward students who are not business majors.

“We wanted to make sure it was inclusive, as well as show people that you can apply your skills that you’re learning from your major and from your co-ops to other aspects outside of your traditional background,” Oloritun said.

For Iwueze, her own experience freshman year sparked the idea. After moving from Nigeria for her first year of college at Northeastern, she felt there was no community that was catered toward a Black woman in the business field like herself.

“I was just thinking about the best way to prevent that risk for someone that’s just like me, coming in as a freshman, looking for a place to grow professionally in the business world,” she said.

As a new organization on campus, they have been working hard to recruit new members. One of the main ways BBOSS tries to gain members is through Instagram and reposting on their members’ social media. They have also used LinkedIn to expand the mailing list to get the word out about the club.

“If you have any interest in business, you can come in,” Oloritun said. “If there’s a topic that you want us to talk about or explore, we can connect you with somebody and we’ll be happy to provide those resources. So, this is a ‘by the community, for the community’ kind of space.”

During meetings, the club holds workshops, networking opportunities and events with companies as well as recruiters that help members to get a step up in the business world and learn about jobs in the industry.

Kyle Tobias, a third-year electrical engineering major and a member of BBOSS found an interest for a business-related career after attending an event, despite his major. Tobias encountered a company advertising a data analyst role, which he initially thought wouldn’t be available for him. However, he learned during the event that even with a less business oriented major, he still had opportunities in that realm.

“That was something that was pretty eye opening for how low the barrier of entry is for getting into that,” Tobias said.

BBOSS has also emphasized navigating recruitment and the job market during a pandemic. Over the summer, the BBOSS team worked to host a summer series, with people talking about how to get a job in a field outside their major. This semester, the club has also been holding several panels with speakers, providing members with information, for example, on how to advantageously utilize LinkedIn.

The networking opportunities in BBOSS have been very beneficial for club members. Tobias recalled one member who obtained an interview with a company who had been at a club event. In the long run, he thinks that the club will gain more attraction from other students at Northeastern as members continue to benefit from its opportunities.

“I think we can do a lot better [in creating a community], although it’s hard with the lack of physical presence, but I’m hoping to hit the nail on the head more on that aspect,” Iwueze said. “Just having more community events where people can actually get to know each other and kind of have a business family within Northeastern and the Black community.”