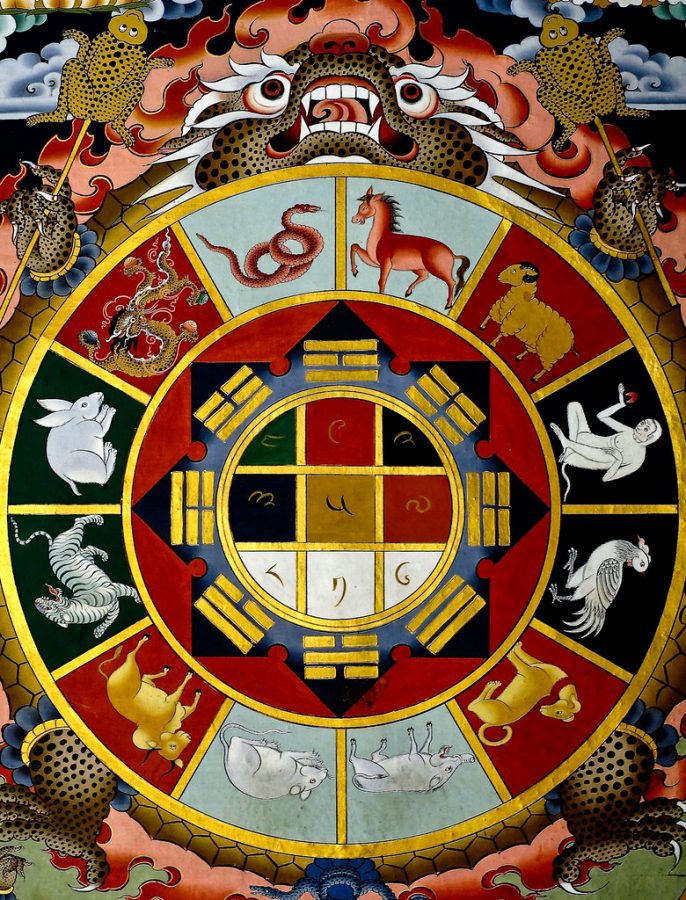 "Painting of Buddhist Astrology" by Bhutan-360 is licensed under CC BY-NC-SA 2.0

Featured is an image used to depict a Buddhist astrology chart.

To some, astrology is a fun way to learn about themselves and the world around them. To others, it is a precise lifestyle and occupation that goes beyond casually checking a daily horoscope.

Astrology can be a fun way to dissect one’s character according to the exact timing and location of birth. Using astrology, someone can make more informed decisions, explore personality traits and even see a glimpse of what their future may have in store.

While the practice deals with the cosmos, astrology is not the same as the natural science of astronomy, which uses exact processes to study celestial objects and their functions in outer space.

For seven years, Izze Kilgariff, a third-year English and linguistics major at Northeastern University, has studied the closely related practice, tarot, which involves the use of fortune-telling cards based on the will of the cosmic universe. To her, astrology isn’t necessarily an exact science nor a silly superstition. Rather, she said that “the vast majority of people see it as, or at least in modern culture, they see it as a fun way to learn more about themselves or joke around and make memes online.”

“To me, astrology is just a fun and light-hearted thing,” Kilgariff said. She admitted, however, that there are people who might view the practice as a superstition because “of its origins, and it not being from a typical religious standpoint.”

The question of whether astrology is a reliable source of information has been a debate between the astrological and scientific communities. While many astrology enthusiasts insist that personal experience is enough to prove that astrology is grounded in truth, scientists have disputed this claim.

According to the University of California at Berkeley’s Understanding Science project, “Astrology is not a very scientific way to answer questions. Although astrologers seek to explain the natural world, they don’t usually attempt to critically evaluate whether those explanations are valid — and this is a key part of science.”

Testimonies of people claiming their astrological sign aligns with their personality is not enough to establish astrology as a reputable science, according to the site. The project also said that astrology is not testable because it makes general predictions that can be fulfilled by any outcome, which makes astrology appear to be accurate if the basis is vague enough to mold to any scenario.

Also, the main flaw of astrologers in the eyes of the scientific community is their lack of extensive research, according to the site. They do not conduct experiments that replicate their claims, reaffirming them; they also ignore evidence that disputes their assertions.

However, Shelley Holloway, an active astrologist and psychotherapist located in Somerville with more than 30 years of astrological experience, claims that astrology is an exact science.

“Astrology was invented alongside science and math. It was really our first science,” she said. “When they were learning about how to study and observe the universe and the planetary motions, that was a scientific endeavor.”

Astrology and astronomy, in this sense, are intrinsically related, she said. They are both attempts to explain the natural world through observation of celestial objects.

“Everything that we do today, including the scientific method was born from that scientific observation, that comparison, the peer reviews,” Holloway said. “You had to be comparing what you find with someone else’s in order to understand that there’s connections between these things.”

Scientists verify hypotheses by ascertaining that experiments produce the same results over and over again. Astrology, according to Holloway, follows a similar trajectory.

Regardless, there are still hundreds of thousands of people who devote their livelihoods to astrology and make it a meaningful part of their everyday lives. For instance, the popular astrology app Co-Star has more than 5million registered accounts.

“What humans noticed over the course of looking up at the stars, is that certain planets corresponded to the behaviors and actions of humans on Earth. And this is where we get the phrase ‘as above, so below,’” Campagna said. “[For example,] Venus is associated with the goddess of love, and romance, and friendship, and beauty and art. When she is above, people have a good time.”

Not all planets usher in such felicity. Saturn, the Lord of Karma, correlates to hardship. Jupiter, the Great Teacher, correlates to learning and wisdom. In this way, all astrological bodies are associated with anthropomorphic adjectives.

“Every single planet … represents a universal energy that humans have always seen and cultivated and expressed,” Campagna said, explaining how astrological stereotypes were derived.

For instance, the zodiac sign Gemini is ruled by the planet Mercury, which is associated with communicativeness. As such, Geminis are typically regarded as chatty and conversable, she said.

Campagna emphasized the longevity of astrology, referring to its ancient origins.

“This is really ancient. It comes from out of Northern Africa and the Middle East, and I really want to acknowledge that as a white person that this is a practice that comes from places and from the wisdom traditions of people that were then adopted by Europeans.”

Astrology is believed to have originated in ancient Babylon. Classical civilizations are held in high regard by scholastic communities for their intellectual accomplishments, and yet astrology has failed to be one of their massively praised contributions.

Perhaps, this is an oversight, Campagna suggested.

“It’s something that humans have used to choose the date of inception for cities,” Campagna said. “The founding of Baghdad was chosen by astrologers. The secret is, if you think that there is a rich and powerful person who doesn’t use an astrologer, you don’t have the full story.”

From Kilgariff’s perspective, however, the apparent accuracy of horoscopes doesn’t originate from astrology’s relation to science or history. Rather, it comes down to something as simple as man’s self-centered nature.

“Everyone’s a little narcissistic,” she said.

So when we read horoscopes, especially vague, daily ones that can be found in newspapers, we affirm the positive traits associated with our sign, she explained. From this point of view, it’s not so much that horoscopes actually are scientifically accurate, they are what the reader wants them to be.

Campagna, who writes monthly horoscopes for her own newsletter as well as a literary magazine based in Los Angeles, breaks down the process of how they are created.

Newspaper and app-generated horoscopes get a lot of flak. They are generally vague, stereotypical, and sometimes flat-out incorrect on a person-to-person basis, Holloway said.

“I have the same criticism of them. You won’t find me validating those, because it does leave a bad taste in people’s mouths. You know, like, ‘Great, everyone in September is going to have all of these characteristics and these exact experiences,’ and that’s just not what astrology actually is,” she said.

Astrology in its true sense is not meant to be broad and general. When reading the general horoscopes that are found in newspapers and apps, the reader is not finding something geared towards them.

Holloway continued to differentiate between general and personalized horoscopes: “How they’re creating those horoscopes — they’re pop astrology horoscopes — they’re basically saying ‘OK, where does that sun in Virgo fall in a general sense? What are the events of the other planets in correlation with that sun?’ They’re looking at other signs and they’re looking at where things fall in the global chart. This isn’t a personalized chart.”

These basic, general, non-personalized horoscopes often only take into account one’s sun sign. However, it is quite normal not to identify with one’s sun sign and its corresponding attributes. As explained by both Campagna and Holloway, so much more comes into play when creating one’s natal chart.

“The sun doesn’t represent your soul’s purpose,” Campagna said. “The moon is also incredibly important in astrology, as is your ascendant.”

Regardless of whether one believes in the truth of astrology, Kilgariff ensured that it can serve as guidance. Astrology is just one avenue in which one can examine themselves introspectively, and even if one doesn’t truly subscribe to the practice, they can pick and choose elements that they find applicable.

Campagna shares this sentiment as well, particularly for decision-making.

“[Astrology] helps us to make decisions more skillfully and more intentionally,” she said.

On the surface-level, astrology may seem like an antiquated practice that forces people into stereotypical boxes. However, astrology is much more complex than that, Holloway said.

“[Astrology] pinpoints, very accurately, fine details of a person’s character,” Holloway said. “We’re actually looking at hundreds, upon thousands of factors mixed together that give you this recipe of a person. It is a soul blueprint.”