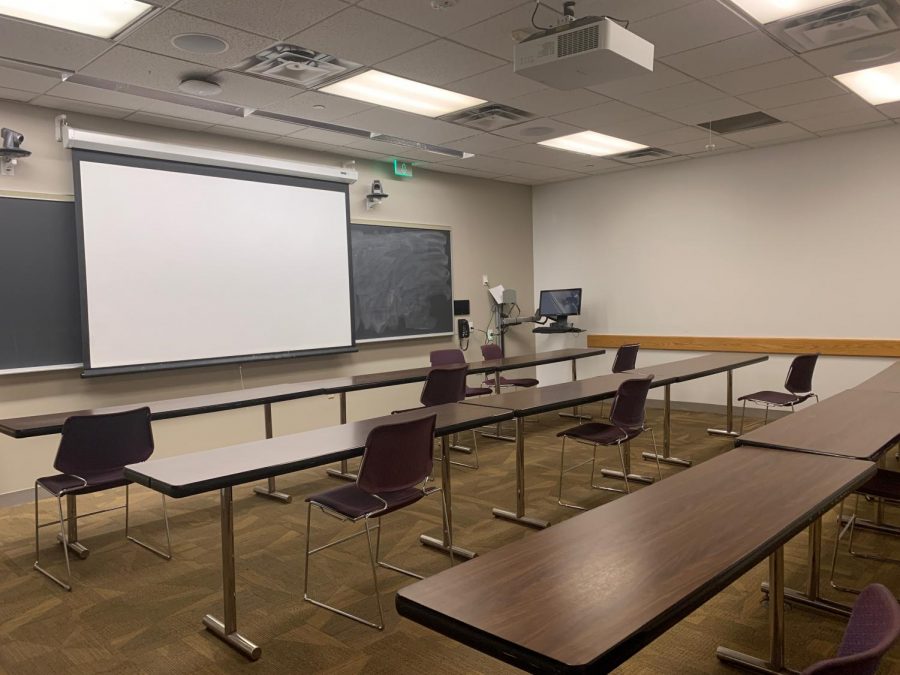 There’s less than two weeks until finals, but Sophie Horton is already feeling burned out. The third-year criminology and psychology combined major serves as the president of Active Minds, a campus organization prioritizing student mental health. The club consists of more than 30 students trying to cope with the isolating effects of a global pandemic.

“We’ve seen a really big increase in membership this semester,” Horton said, “which I think is really telling of the general state of things going on.”

Horton only has one lecture-based class this semester, and she finds it very hard to concentrate.

“I’m someone who gets distracted very easily,” she said. “Having class on a computer with access to literally everything has been a challenge to keep focusing.”

Neuroscientists and psychologists coined the term “Zoom fatigue” to describe the escalating exhaustion that often accompanies virtual conferences. Since the start of the pandemic, students nationwide shifted to online platforms in order to keep up with classwork. The company reported 300 million daily users in April 2020, compared to only 10 million in December 2019.

Research from Harvard suggests that too many people and unfamiliar stimuli in video conferences can overwhelm and confuse students. Human brains are hard-wired for in-person interaction; staring at a screen for too long makes it harder to absorb information.

Other symptoms of techno-stress include insomnia and headaches.

“At the end of the day, I try to close my eyes to go to bed and I’m like ‘Why do my eyes hurt so much? Oh, it’s probably because I’ve been staring at a screen all day,’” Horton said.

Horton said that stressors from the pandemic can exacerbate pre-existing mental illness, something she’s seen play out in her own club. This loneliness and isolation can lead to newfound depression about the state of the world.

“For a lot of people, world problems feel very out of their control,” she said. “There’s not necessarily anything you can do about the pandemic aside from your own health and the precautions that you take.”

Horton said that there’s a lot of “confusion in the air” regarding Northeastern’s plan for a spring semester.

“I’m a bit nervous about the spring, especially because there’s literally no [spring] break,” she said. “We’re just going to be running for three and a half months straight through.”

The spring term will start Jan. 19, with the last day of finals on April 30. Northeastern administrators and health experts intend to discourage travel and prevent the spread of COVID-19.

Horton expects that burnout rates will rise as students continue to struggle with school during the pandemic.

Olivia Kriedeman-Hubbard, a second-year psychology major, has also struggled with increasing academic stress and an inability to focus.

“Being sent home sent me to a really bad place,” she said. “I did not feel like I was capable of doing my work the same way I always had been.”

When Kriedeman-Hubbard returned to campus, she faced new obstacles. As someone who’s always been a “very social person,” she never really struggled to meet friends in classes until this semester.

“This year, it’s a little bit weird to reach out to people over the internet,” she said. “ I haven’t been making those kinds of connections.”

She said that she feels the same way about networking with professors. “A lot of times I don’t even want to raise my hand in class, just because of the anxiety of talking over Zoom,” she said.

Kreideman-Hubbard said that other students are frustrated by a lack of co-op availability in the spring. She said that some of her roommates have to take classes because they haven’t gotten any job offers.

“I feel like that could lead to burnout because they weren’t planning on taking classes next year and now they’re kind of being forced to because of COVID,” she said. “COVID has taken over and really diminished opportunities for people going on co-op.”

Kreidman-Hubbard expressed gratitude for the creation of the Cabot testing center and its role in keeping the community safe. Nevertheless, she said it was disheartening to see the lack of mental health funding from the administration. “Suicide rates are up right now due to the pandemic,” she said. “You would think they would also be pouring money into mental health to keep kids away from that and be regularly checking in.”

Experts nationwide recognize a lack of mental health resources on college campuses. This has only become even more apparent since the outbreak.

“Even pre-pandemic, we were dealing with a global and campus mental health crisis,” said Dr. Kristen Lee, a Northeastern faculty member specializing in behavioral science and a licensed social worker. “We were already seeing escalating levels of anxiety and depression.”

Lee said that many students are coping with a collective grief and trauma as they grapple with the pandemic. Most feel alone.

“The biggest lie that anxiety, depression, distress or mental health issues can tell us is that we’re the only ones,” she said.

Lee encouraged students to assess their coping mechanisms. “It’s good protocol to be investing in self-care, to be staying connected with our community and to bolster protective factors rather than just going on as business per usual,” she said.

She also emphasized the necessity of leveraging “psychological agency,” or realizing that “we take control of what we can control and harness that.” Microbreaks are useful in order to recalibrate the brain, she added. She also urged students to find creative outlets, like dance, music or journaling.

Despite the “impending sense of doom,” Lee said, humans are resilient. She said that students should make an effort to look at things from a different perspective and reflect on the complex nature of life — a reminder that suffering can exist alongside beauty and hope.

Above all, Lee said that we need to care for each other and care for ourselves.

“There’s no health without mental health,” she said. “There’s nothing more important than our wellbeing.”