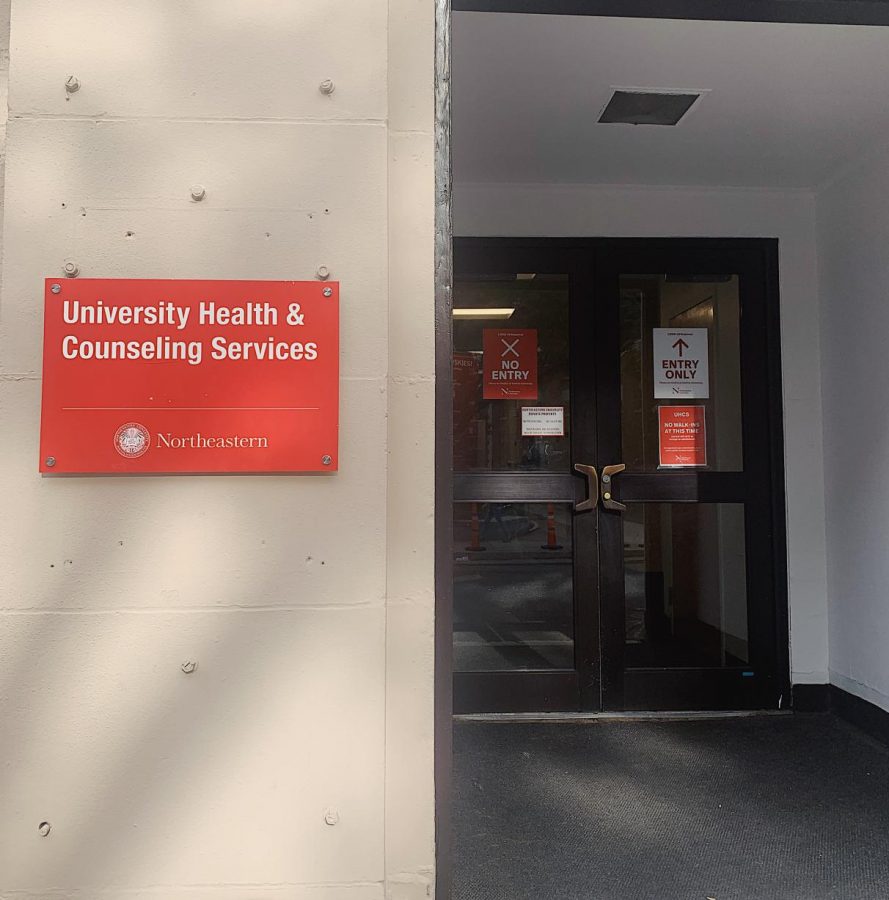 An entrance to the UHCS building on Forsyth Street.

Northeastern has decorated the Boston campus with lawn signs and murals touting its COVID-19 response mantra, “Protect the Pack,” but students question where this dedication to student health has been in the past.

Northeastern’s reopening plan, marked by frequent testing, social distancing requirements and the NUflex learning model, has been integral in keeping the school’s infection rate as low as 0.19 percent. However, the school’s capacity to mobilize around this particular health crisis has sparked a conversation regarding the inadequacy of the University Health and Counseling Services, or UHCS, especially when it comes to mental health.

The COVID-19 pandemic is not the only health crisis plaguing college students this year. Data from the Centers for Disease Control and Prevention revealed that 75 percent of college-aged individuals have reported at least one mental affliction since the onset of the pandemic, and 25 percent have reported suicidal ideation within the past 30 days.

“I think over the last several years we’ve seen an incredible uptick in demand for mental health services. I think it’s a national trend, we’re seeing that across the country,” Civiletto said. “With the pandemic on top of it, more and more students are now reaching out and requesting support.”

Universities across the nation have anticipated increased demand for mental health services, but UHCS employs only 11 mental health clinicians to serve more than 14,000 undergraduate students. Despite UHCS adding two new clinicians last fall, the number still pales in comparison to nearby MIT, which employs nearly three times the number of counselors for its small undergraduate population of 4,500. The shortstaffing of UHCS manifests itself in grueling wait times, low appointment availability and a heavy reliance on a referral system.

Fourth-year civil engineering major Julia Ubertini was initially granted a series of on-campus counseling sessions, but soon found herself thumbing through a list of psychologists in the greater Boston area.

“At UHCS, they’ll take you for a little bit, but after that time period, they legitimately cut you off. You cannot go in,” Ubertini said, explaining that students can be referred outside of UHCS as they are only eligible for five sessions per semester. “You have to go to a referral or find another counselor in the Boston area by yourself.”

Further, Ubertini asserts that the referrals provided were ineffective, connecting students with counselors who are either fully-booked or no longer in service.

“Every person I would call was full or not super active,” Ubertini said. “I ended up not being able to get a counselor, which was not a great experience … I didn’t really know how to deal with my problems.”

Upon receiving similar feedback from students, UHCS established its updated referral network [email protected] last fall. The system is intended to serve as an extension of UHCS services for students who may benefit from ongoing therapy.

“There were a lot of challenges that students were finding when connecting with therapists in the community,” Civiletto said. “They called, they played phone tag, maybe that copay might’ve been a barrier or the idea of using their insurance felt uncomfortable because they didn’t want their family to know they were participating in therapy. ‘Find’ really helped us to, as much as possible, remove some of those real, clear barriers.”

However, second-year biochemistry major and Resident Assistant Sam Valentin added that initial counseling prior to referral is not always provided. He said residents have complained that they were denied UHCS service under the pretense that they don’t “qualify.”

“I don’t know how they even say what ‘qualifies’ someone for mental health services,” Valentin said. “It shouldn’t be up to a company to decide if someone needs help. If someone is reaching out, they should receive the help regardless.”

Civiletto said she was unaware of this practice and saddened to hear that students experienced dismissal from UHCS in any capacity.

Although these students report being turned away from UHCS, they might still be paying for its services. Under Massachusetts law, Northeastern students are required to enroll in the university’s Student Health Plan unless they can waive the requirement with proof of comparable health insurance. University spokesperson Shannon Nargi wrote in an email to The News that fees from the health plan bankroll UHCS’s services.

Residential assistants, or RAs, feel burdened with the task of picking up UHCS’ slack. Valentin has seen more and more residents relying on RAs for counseling, but he argues that RAs are insufficiently trained and insufficiently paid to replace mental health professionals.

“The fact that there have been bad experiences with organizations such as UHCS puts more pressure on my end,” Valentin said. “Students know the reputation of UHCS and because of this, they look towards RAs as front lines of assistance, whereas in years past, we’d be a sideline.”

UHCS became aware of the issue and held a meeting with the RAs during their mental health resources training, Valentin said. He said that during that meeting, UHCS representatives reassured the group that they are reforming under new management and eager to be trusted as a resource in the future.

When informed about a friend’s unsatisfactory experience with UHCS, third-year business major Petra Dagar decided to take matters into her own hands. She is in the process of introducing the Northeastern community to “Unmasked,” an app that serves as a virtual support group through which students can discuss mental health concerns. The app is not meant to replace professional services, but instead offer basic guidance and remind students that they aren’t alone.

“I had a friend who went to the health center looking for a meeting with a counselor, but the counselor sent him straight to a psychologist,” Dagar said. “He didn’t have extreme problems. He just wanted to talk it out and have a person listen to him.”

Civiletto was “saddened” to hear of the negative experiences with UHCS among these students, but she urges the Northeastern community to give the health center another chance, especially as the company rolls out new initiatives.

“I recognize that it might be hard to make that call again,” Civiletto said. “But I hope people will see that changes are happening and that we’re really invested in providing services.”

To bridge the gap between UHCS and the student body, Civiletto adds that the organization is forging partnerships with student groups. In cooperation with Active Minds, a student-led organization fighting to reduce the stigma surrounding mental health, they have created and distributed stickers listing crisis hotline numbers and other support resources. Further, they plan to release an informational video in the coming weeks to spread information about newer initiatives like [email protected]

Civiletto and her team at UHCS believe that the promise to “protect the pack” should extend to mental health support. But a combination of budget limitations from Northeastern and sky-high demand for services prevent the organization from offering extensive, on-campus counseling to every student who requests it.

“If you ask any of us, we would all like to have 100 clinicians,” Civiletto said.

The addition of programs like [email protected] and the creation of two new counselor positions last fall left Civiletto feeling “hopeful” that the university is responding to the increased demand.

However, some students are skeptical. Ubertini feels the expansion of mental health resources on campus is not a question of capacity, but a question of will.

“I think the COVID-19 testing system that they have right now is incredible …  It was something they pulled together so quickly because whether or not they want to admit it, they have the money,” she said, citing the budget surplus reported last semester. “But COVID-19 is such an extreme case … I just don’t see them prioritizing mental health in the same way.”