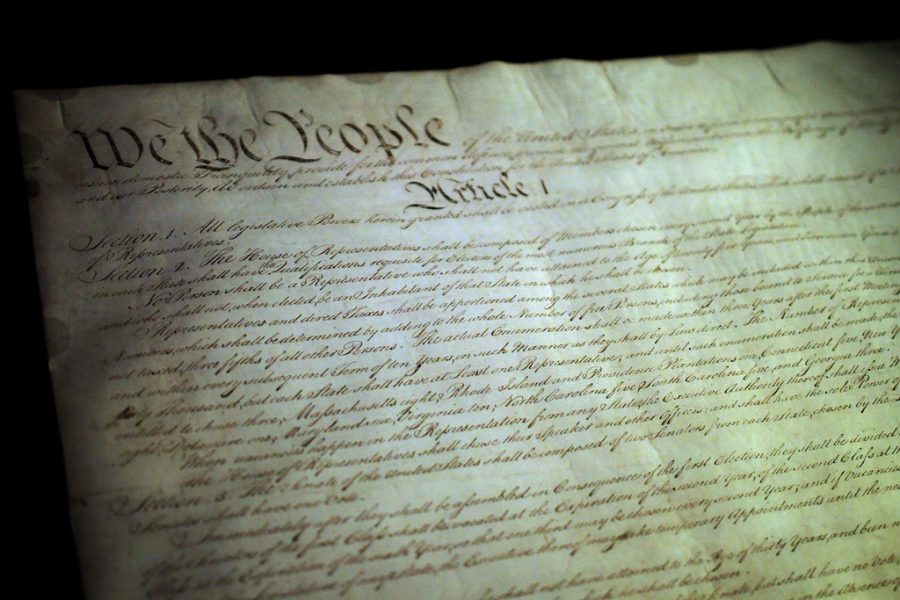 "Constitution in the National Archives" by Mr.TinDC is licensed under CC BY-ND 2.0

By blatantly breaking from some of the United States’ most fundamental precedents and laws, President Donald J. Trump has unwittingly taught us what a president can and cannot do.

Perversely, and perhaps ironically, we have been reminded of rules by his rule-breaking, some of which strikes at the rudiments of democracy. For instance, Trump has expressly called for the disposal of millions of legitimate mail-in votes. These ballots were expected to heavily favor Democrats because of Trump’s frequent lies about the trustworthiness of absentee voting, lies which deterred Republicans from voting through mail.

His supporters took these lies as a cue to vote in person, hence the “red mirage” we witnessed on election night.

Whether through Twitter or a litany of failed lawsuits, Trump has yet again proved he is willing to selfishly break the rules and test our republic.

So, here, I’ll attempt to recount some of what the Trump administration has brazenly taught us about U.S. history.

The importance of an orderly transition of power

This topic has accrued salience rapidly in recent weeks. It took 17 days after former Vice President Joe Biden was projected to be the president-elect for the U.S. General Services Administration, or GSA, to formally recognize Biden’s win. This action grants the Biden team access to the funds and intelligence necessary to prepare for governing.

These events recall the 9/11 Commission Report, released in the aftermath of the attacks on the Pentagon and World Trade Center. The document details how the contested 2000 election and consequent transition delay made the U.S. vulnerable to attack.

The GSA gave President George W. Bush access to briefings in December of 2000, much later than usual, which is right after an election. This delay was due to a long U.S. Supreme Court fight over who had won the race.

And, like in 2000, albeit not nearly to a similar extent and in a very different context, Republicans have aggressively disputed election results, stalling the transition of power.

Whether or not the 17 days the current administration spent ignoring reality will turn out to hurt either Biden’s pandemic response or security agenda may be the subject of future study. Whatever the case, we have been served a potentially costly reminder of the importance of a functioning bureaucracy.

It’s almost redundant to discuss Trump’s hatred for a free press. Instead, I’ll turn to the right to assemble, a key right stipulated under the First Amendment.

In June, Trump ordered the tear-gassing of demonstrators in Washington, D.C. who were peacefully protesting systemic racism in the wake of George Floyd’s murder. He did this to make way for a photo-op, in which he posed in front of a church with a Bible. Military leaders who strolled with Trump later tried to distance themselves from the incident.

The event was almost quintessentially dictatorial; a wannabe strongman used unwarranted force on people practicing free speech in order to create an appearance of virility.

Notwithstanding President George Washington’s military response to the Whiskey Rebellion, a violent demonstration by Pennsylvania farmers protesting a federal tax on whiskey, it is safe to say the first president would harshly disapprove.

Through the Electoral College, the founders created one of the greatest constitutional impediments to American democracy, proving Washington far from infallible. There is a completely legal potential for state legislatures to defy their states’ popular vote and send a loyal slate of electors to the Electoral College on Dec. 14 of an election year.

Justification for this move is a “failed election,” per the 1887 Electoral Count Act, which was passed in wake of the constitutional crisis caused by the contested 1876 election. What constitutes a failed election is unclear in the law, but the legislation leaves open the possibility for a state congress to appoint electors that would vote for the loser of said state. Yet, if the legislature and governor disagree on who should win their state, they may send forth competing electors, precipitating a constitutional crisis.

Trump and some prominent Republicans, including Florida Governor Ron DeSantis,

advocated for the selection of electors loyal to him after the election.

However, the above doomsday scenario appears increasingly unlikely, especially since Michigan Republicans, who control both chambers of the state’s legislative branch but not the governorship, have now cooperated to certify Biden’s victory there.

And Biden has been formally allocated a critical mass of electors by state governments. As of Friday, California certified its results, selecting its electors and officially pushing Biden over the threshold he needs in the Electoral College to win. Now, the Dec. 14 vote is protected from a steal.

Still, the very prospect of a fully legal coup is unnerving.

Why divestment is precedential

The norm that the president divest from their private interests is essential, not only because using a taxpayer-subsidized post to enrich oneself is wrong, but also because operating businesses while in office can create conflicts of interest, both in areas of foreign diplomacy and domestic business regulation.

While Trump has said he keeps his businesses separate from governing, he has provided no proof of divestment.

The New York Times reported in October that Trump allowed business leaders (foreign, domestic, state-tied and private) to leverage membership at Trump’s Mar-a-Lago resort in discussions of policy and granting federal contracts. In fact, he is said in the report to have acknowledged to his treasury secretary, Steven Mnuchin, that Trump contributors have louder voices in fiscal policy.

Journalist Dan Alexander published a book in September, “White House Inc: How Donald Trump Turned the Presidency into a Business,” detailing how the Trump Organization is renting out space in a San Francisco office building to a lobbying firm affiliated with the Qatari government. Mysteriously, Alexander writes, Trump’s tone around Qatar’s supposed funding of terrorism softened around the time the firm began doing business with The Trump Organization.

It is not against the law for the president to remain affiliated with previous businesses. But it is certainly unethical — and in some cases illegal — to conflate the presidency and entrepreneurship.

The Emoluments Clause of Article I of the Constitution stipulates that the federal government is prohibited from receiving gifts from foreign actors, as such exchanges can bend policy to the will of the benefactor.

While foreign leaders staying at Trump’s properties for diplomatic reasons, among other conflicts, have almost certainly helped Trump line his pockets, a lawsuit about Trump and the Emoluments Clause was stymied by the reticence of the U.S. Supreme Court earlier this year.

Whether or not Trump has broken the law is unclear, as the teeth of the Clause prove somewhat rounded. But he has shown us why presidents in the past have generally kept personal finances and the White House apart.

Let us hope that these sordid instances do not prove to be their own new precedents.

But after witnessing Republicans’ willingness to take cues from Trump over the past five years, I fear that the events above are not just history, but blueprints for placating a transformed base.

Jonas D. Ruzek is a third-year journalism major. He can be reached at [email protected]astern.edu or @RuzekD on Twitter.