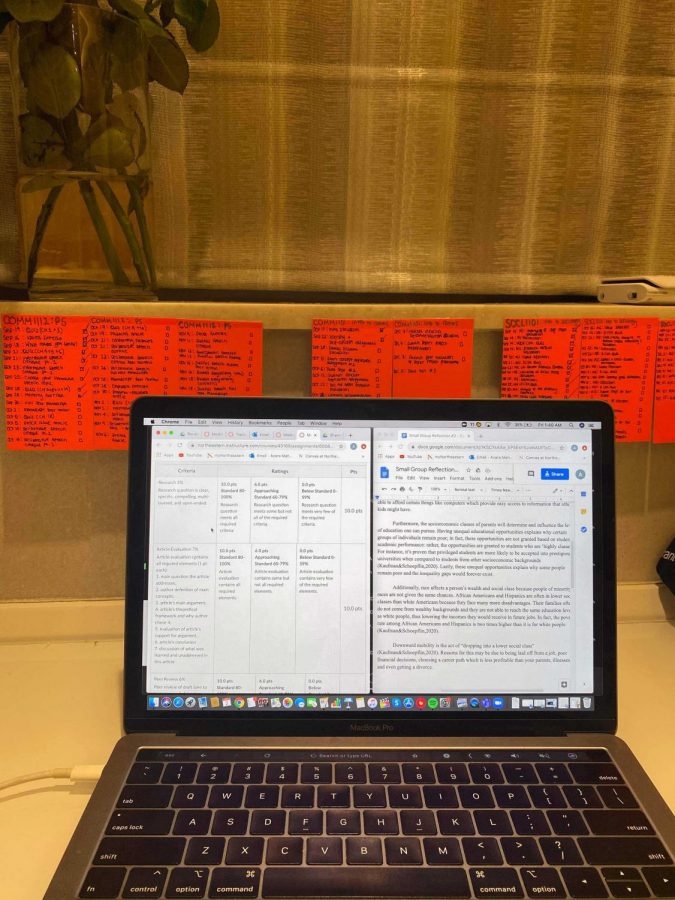 What was supposed to be an exciting spring for many NU Start students arriving on campus for the first time has turned into another semester at home due to the worsening coronavirus pandemic.

With positive COVID-19 cases spiking across the country, in Massachusetts and at Northeastern, many NU Start students said the virus has played a major role in determining their spring semester plans. After her remote fall semester, first-year communication studies and sociology major Azara Mahtani said she is looking forward to the time she will spend on campus in the spring.

“I think more people have become reluctant to go, thinking it’s not safe anymore,” she said. “It’s really half and half. I’ve heard that some people who are on campus right now aren’t even planning on staying and are instead going home.”

For Mahtani, she was originally planning to come to campus in January but decided to wait until later in the semester due to rising coronavirus cases in Boston. The city  had reached over 30,000 confirmed cases on Dec. 7.

“I definitely can’t wait to be in Boston,” she said. “I’m excited to actually have a face-to-face lesson with a professor and be able to do little things like go to the library to study.”

Despite promising developments of several vaccines, first-year chemical engineering major Brendan Pearson said he would be staying home in New Jersey next semester, seeing how campus life has greatly changed.

“The current situation is difficult because of the virus, and it’s changed a lot compared to what college would normally be like,” Pearson said. “There’s also not a lot of professors teaching on campus anyway, so I weighed the pros and cons and just decided coming to campus wouldn’t be worth it until next fall.”

Sachi Kulkarni, a first-year biology and mathematics major from Texas, also made the decision to stay home next semester in order to save money and spend time with family.

“Coronavirus was the main factor that I considered because I didn’t want to pay full tuition for an experience I knew was not going to be the same as a traditional college experience,” Kulkarni said. “I figured that since I was going to be away at college for the next four years anyway, I wouldn’t be spending time like this at home for a very long time.”

Northeastern is continuing the NU Start program through the spring semester, allowing students like Kulkarni to continue asynchronous learning.

“This format worked very well as I was able to structure my own day and do work when I was most productive, which is at night,” she said. “This past semester in NU Start has been great because I’m able to volunteer. I’ve been taking shifts at the local food bank in the afternoon and if I was in classes I wouldn’t be able to do that.”

Pearson said he is content with another semester as an NU Start student because of his positive experience in the program this fall.

“If I have to be home because of the pandemic, I would choose NU Start. And I’d be happy with that because the professors I had were pretty good at handling the online interface,” Pearson said. “They’ve been very understanding about assignments that are late because they know it’s been a tough time for many people.”

Kulkarni said she views another remote semester as a benefit rather than a setback.

“When I tell people I’m remote, they always say, ‘Oh, I’m so sorry. You’re not getting the first-year experience,’” she said. “But I don’t think there is anything to feel bad about because I’m using this time to be at home and spend time with my family, which I won’t be able to do for most of college, and I’m actually really excited to do it again.”