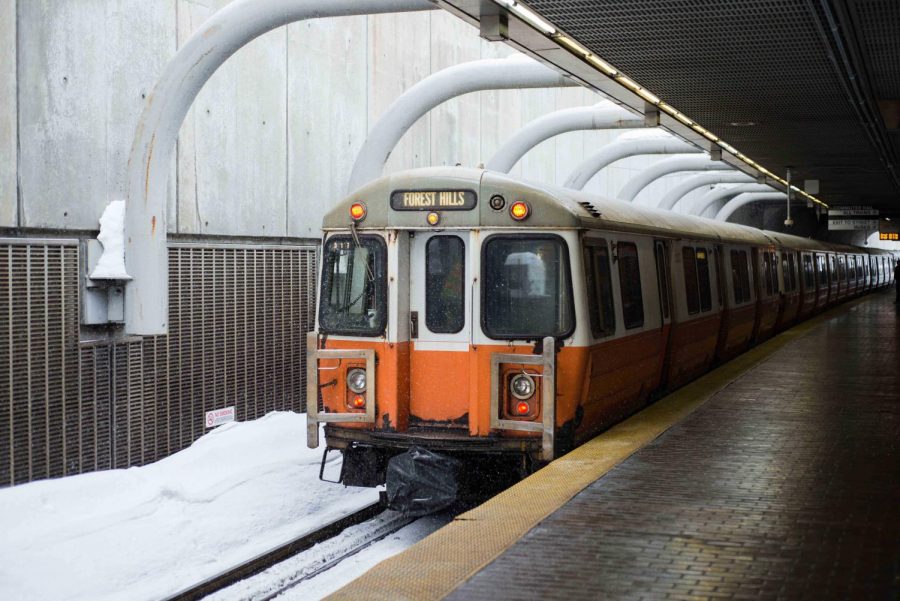 The MBTA budget cuts will impact the frequency of T rides, with the Orange Line now running only every eight-and-a-half minutes.

A severe decline in ridership due to the COVID-19 pandemic has forced the MBTA to reconfigure how it operates under substantial budget cuts — leaving frequent riders skeptical of the already unreliable transportation system.

Forging Ahead is the MBTA’s initiative to recover from the COVID-19 pandemic, which is predicted to leave the agency with a $600 million deficit. The plan includes the proposed budget cuts, effective at the beginning of 2021.

Boston’s public transportation system has never received raving reviews — in fact, when Gov. Charlie Baker ran for re-election in the fall of 2018, improving the MBTA was one of the essential issues he emphasized. However, since ridership is now nearly a tenth of what it was before the pandemic, these budget cuts are difficult to avoid.

The commuter rail and the ferry system are likely to be hit the hardest by the cuts. Likewise, the commuter rail, a service that has only seen 13 percent of its pre-COVID-19 ridership, will see a drastic decline in available rides. A handful of locations will have decreased stops, including: the Plimptonville stop in Walpole; Prides Crossing in Beverly, Silver Hill and Hastings in Weston; and Plymouth and Cedar Park in Melrose.

“On the commuter rail, we are proposing to stop all service after 9 p.m. [and] stop weekend service,” Paget-Seekins said.

Fewer stops on these lines could prove inconvenient for students, whether it be for their commute to co-op or just exploring the city. Megan Moffat, a first-year psychology major at Northeastern University, depends on the commuter rail on the weekends, and said the cuts will make planning a lot harder for her.

“I use both [the T and the commuter rail] for hiking because to get out of the city you need to use the T or commuter rail. And I use it to get around the city too, like the North End, stuff like that,” Moffat said. “It would just make weekend plans more difficult.”

The T will face a lower volume of rides — a change that will affect the Northeastern community because the Green and Orange Lines, trains that students frequently take, run through campus. Contributing to the system’s 20 percent reduction — an overall reduction from 505 to 430 trains a day— in train frequencies, the Green Line will run at a minimum of nine-and-a-half minute frequencies and the Orange Line every eight-and-a-half minutes. With the Forging Ahead plan’s proposal, Paget-Seekins said that “about three percent of current trips would potentially lose access or have to divert to a different mode.”

The ferry system — a lesser-known portion of the MBTA’s services — is currently operating at 12 percent of its pre-COVID-19 operation. Because of this steep decline, the ferry will be cut from the city’s public transportation service come the new year, affecting riders from Charlestown, Hull and Hingham. However, riders can remedy this loss by using the 93 bus route or the Greenbush commuter rail line.

In accordance with the Forging Ahead plan, services will only be added back by demand. Paget-Seekins said the commuter rail and ferry services have been declining for a while, which is why the T is being prioritized, and described how the MBTA’s prioritization of services is being allocated based on need.

“We created a framework thinking about two different entities: one was transit critical population,” Paget-Seekins said. “So where are the riders who are most dependent on public transit? Which includes low-income populations, communities of color and zero-to-low vehicle houses, and they also did an additional screen for seniors and people with disabilities. And then on the other axis we have ridership, so where we are seeing high ridership or project there to be high ridership and where we are seeing low ridership.”

Like those at Northeastern, students at surrounding schools in the city, like Simmons, will also reap the detriments of the MBTA’s budget cuts. While some might argue that Uber is a viable alternative, the T is far cheaper and therefore more accessible for college students.

Margalit Sabin, a freshman at Simmons University, said that the T is her best option financially.

“I’m definitely dependent on it because I work four to five days per week downtown in between the North End and Financial District,” Sabin said. “So if I had to walk there every day, it would take me an hour, which is another hour that I could be doing schoolwork. Or I would have to Uber, which would cost a lot of money, whereas the T is like $2.40 and I get there in 15 minutes.”

In addition to the inconvenience of fewer stops and cut services, riders are worried about the effects fewer rides will have on slowing the COVID-19 pandemic. Some riders assume that fewer rides will mean a greater volume of people on each train — a threat to social distancing amid the pandemic.

“Already, people don’t wear masks on the T enough. There’s always like three people who don’t wear them, so that is like really worrying to me because I would rather not get COVID-19 from doing something that I have to do,” Sabin said. “I have to take the T and I know it’s going to be more crowded if there are fewer rides.”