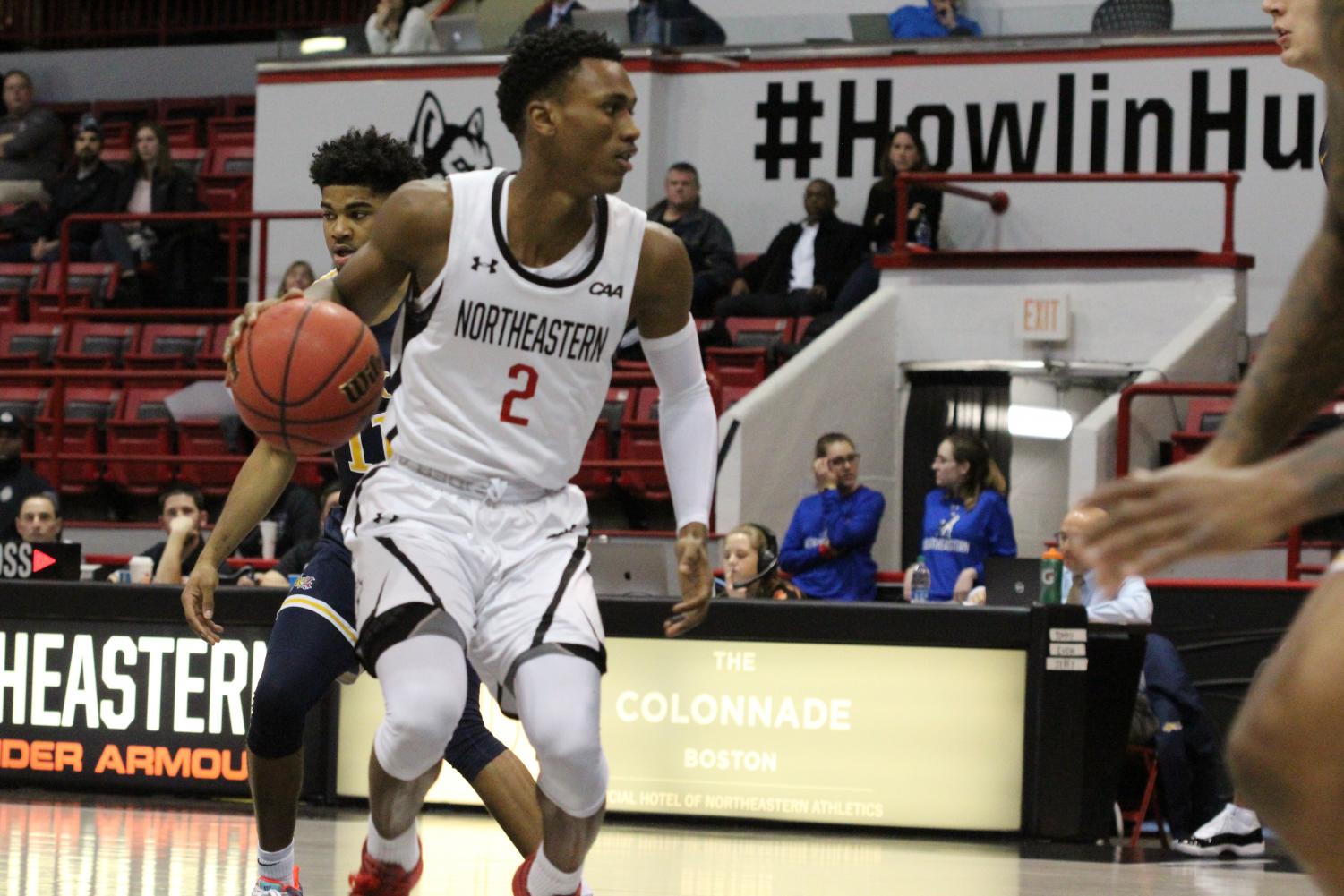 The Huskies will try to get off to a hot start against UMass at 1:30 behind preseason second-team all-CAA honoree guard Tyson Walker. (Sarah Olender)

The Huskies will try to get off to a hot start against UMass at 1:30 behind preseason second-team all-CAA honoree guard Tyson Walker.

After multiple cancellations and delays due to COVID-19 cases, the Northeastern men’s basketball team will finally begin their season Dec. 11 against UMass.

This game was added to the Huskies’ schedule after the game against UMass Lowell, which was scheduled for Dec. 9, was cancelled due to positive COVID results within the UMass Lowell traveling party. Instead, Northeastern will travel to Amherst to take on the Minutemen before playing them again in their home opener Sunday.

Despite the hectic start to the season and the challenges that the team has faced due to COVID-19, head coach Bill Coen is still focused on the same goals as the previous years. The team has advanced to the Colonial Athletic Association conference championship in each of the past three seasons, and is looking to do so again this year.

“If 2020 has taught us anything, it’s to stay ready and be adaptable and be nimble. It’s been a rocky start to the season all over the country for college basketball, but we have a young and versatile group this season,” Coen said. “Through all that, our standards never change. Our goals each and every year are to win a CAA championship and to compete for a regular season and a tournament championship.”

“Our outlook…hasn’t really changed that much,” Strong said. “We still have a goal of winning the CAA and making it to the NCAA tournament. That will not change, unless COVID or something allows that not to happen.”

Unlike previous years, the team was unable to hold practice, training camp and the player development program during the fall. Regardless, Coen has praised his team throughout this year and highlighted their ability to bounce back from any setbacks.

“Our guys have remained positive and resilient … they’ve attacked the practices we’re able to have, and we’re excited to start the season off,” he said.

The Huskies will have to deal with the loss of three of their top four scorers from last season, including last year’s leading scorer and all-CAA first team guard Jordan Roland. Players such as sophomore guard Tyson Walker, who was named to the all-CAA rookie team last year, and redshirt juniors Jason Strong and Shaquille Walters will have to take on bigger roles this season, and new players will have to step up as well.

“We have four freshmen who are new to the program,” Coen said. “I think they’re going to make tremendous contributions, along with transfer-eligible Chris Doherty from Notre Dame.”

Doherty, a native of Marlborough, Mass., is a redshirt sophomore who played in 17 games for the Irish over two seasons before transferring to Northeastern. While he was rarely featured for Notre Dame, Coen is confident in Doherty and expects him to be a contributing member of the team this season.

“He’s going to factor prominently in what we do,” Coen said.

With Roland averaging 21.9 points per game last season, the team will have to find a way to duplicate his output, but it may not come from a single source.

“[Scoring is] going to come from somewhere,” said Coen. “It’s going to be done by committee. Obviously I’d be pleasantly surprised if we had a guy who could score at that level consistently for us this year, so we’re going to have to be more evenly balanced and do it with elite teamwork.”

One of the players who will be involved in this effort is Walker, who was named to the preseason all-CAA second team. He finished the 2020 season as the team’s third-best scorer, averaging 10.4 PPG in his freshman year, and also led the team in assists (104) and steals (56). As Northeastern’s main facilitator, he will have to continue finding open teammates but also finding his own shot.

“Even though [Walker] is predicted to be on the all-league team, I think he’s still going to shock some people…He continues to get better from last year and everyday in practice. He comes to play and always amazes us,” Strong said.

Walters will also have to step up. As the only other returning starter and one of the oldest players on the team, his role as a leader will be important. He finished last season on fire, with five double-doubles in his last six games, and his play will be a major factor this season for the Huskies.

Coen will also call upon players such as redshirt junior forward Greg Eboigbodin, sophomore guard Vito Cubrilo and Strong, who might not have played a large role last season.

Strong came off the bench last season in 33 games and averaged 3.5 PPG, but was extremely efficient with his shot decisions, finishing with a field goal percentage of .479. He said that he hopes to earn a bigger role by “being a leader, bringing that energy during games and in practice, just doing the things that the team needs me to do.”

He is excited about improving on the court and working to duplicate the output from last season’s top performers.

“We lost a couple big pieces from last year,” Strong said. “I just want to step up and do some of the things they did.”

This season, the CAA has implemented a schedule intended to minimize travel for teams during the pandemic, which includes multiple two-game series against conference opponents. This means that the Huskies will often have to play twice in three days against the same team throughout the season.

This style of schedule is most similar to the CAA conference tournament, where teams have to play three games in three days. However, it will be difficult to play so many games in a short period of time, according to Strong.

“I prefer the traditional schedule,” Strong said. “But this schedule also gets us ready for the CAA tournament … I’m just thankful that we’re playing.”

Coen, Strong and the entire team are excited to start their season off today against UMass Amherst, but they know it’s a long season ahead of them.

Coen’s message to the team before the year is simple, yet necessary in times like these: “Stay ready.”