Students, professors along ‘Avenue of the Arts’ redefine creativity during COVID-19 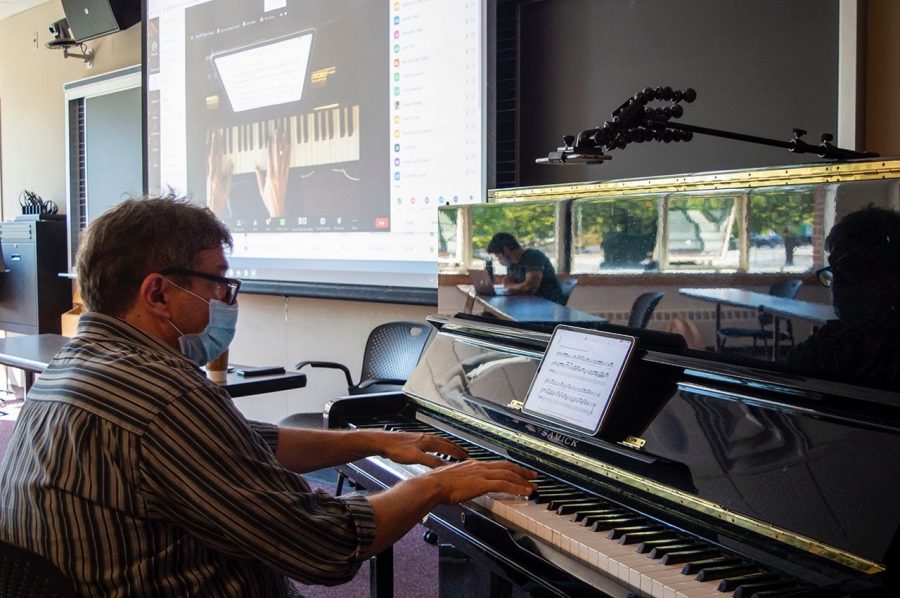 Art and music schools on Huntington Avenue, also known as the “Avenue of the Arts,” have had to adapt to changes brought on by the COVID-19 pandemic. This image features Professor Anthony De Ritis, who teaches his Music Fundamentals 1 course online via NUflex.

A circular stage with a pool in the middle and the audience all around was what Des Bennet, a fifth-year theatre major at Northeastern University, had envisioned for her capstone production of “Metamorphoses.” She wanted a pool where actors would submerge themselves, float on inflatables and look at their reflection.

“Of course, this wasn’t possible with a play over Zoom, so I toyed with staging the entire production from the bathtubs of actors’ homes, around lakes and shorelines, all while trying to include any images or settings with water as much as possible,” Bennet said.

Instead, she found herself changing her plan again, working with the idea of water as a reflective, ever-changing medium. Only a few of her 13 cast members filmed on shorelines. She and her scenic designer spent weeks capturing videos of filtering light, taking close-ups of leaves and experimenting with fabric and light sources.

A show completely directed and filmed on Zoom was not what Bennet had planned for her final college project.

“At first, I was really upset because at the time I had idealized the in-person experience of directing my capstone,” Bennet said. “There was a long period of the summer where I was holding out thinking that this would be fixed by September.”

But that, of course, never happened, so she had no choice but to move on.

Bennet is not the only visual and performing arts student forced to change her plans. Art and music schools on Huntington Avenue, also known as the “Avenue of the Arts,” have had to adapt this year as in-person activities and performances were canceled or modified. Students whose projects were designed to be large-scale productions with live audiences had to settle for online performances, in some cases only in front of a few people.

Not only are arts students unable to learn how they normally would, but they are also missing out on practical experiences that they would get from being in-person. This loss is affecting a large part of who they are and what they came to school to learn.

“It is not the ideal situation, but there are ways to do music. I routinely hear students say they are grateful for the opportunity to play,” Feinstein said.

Feinstein can only have a maximum of eight students in his room at a time. He has 11 30-minute rehearsals throughout the week so that everyone who wants to play has the opportunity. Students practice their instruments for 30 minutes and then the room has to air out for 30 minutes. This makes for a very long rehearsal process for Feinstein, but not for his students, who are used to having two-and-a-half-hour rehearsals.

Not only does Feinstein care about strengthening his students’ musical abilities, but he also cares about the well-being of his students.

“For some, these ensembles are very important for their social lives,” he said. “In addition to the 11 chamber ensembles, I decided to have an online weekly version of the class that meets for just under an hour. This is a way for people who are unable to play to stay a part of the community to keep their musical lives stimulated and also have the social component.”

“There is so much music that can’t be played,” said Charles Peltz, director of the wind ensemble at the New England Conservatory. He said there is no way to compensate for this loss both musically and socially. The only way to get through it is to be positive, which is how Peltz, his students and colleagues cope.

At the New England Conservatory, only eight musicians are allowed in a room at one time, distanced 12 feet apart. Everything done at the conservatory has to be in small groups; large ensembles are prohibited.

Students are making the best of it, but their work has been greatly altered with COVID-19 regulations that some question whether it is worth paying the hefty tuition for a drastically modified education. While the transition to online classes was difficult for everyone, it was particularly devastating for music and arts students.

“We took a big hit,” said Aarya Ganesan, a third-year film scoring major at Berklee College of Music. “The professors were very lost and it really broke the continuity of the class. Music classes are very interactive so to transfer that to a screen and feel present in the class was very difficult.”

For Ganesan, the 10-hour time difference between Boston and India was too much for her to spend a whole semester taking classes online. She could not stay up all night doing class. She decided to take this semester off.

“We pay that much money to a school dedicated to music for all of the facilities it has and I was missing out on all of that,” Ganesan said. “They barely reduced the tuition and 90 percent of why they cost so much is because of the facilities: studios, practice spaces, the communities and being able to watch concerts.”

Berklee College of Music closed all of its facilities for this fall semester; however, many students still took online classes. Ganesan said that she knew there was no way she could stay motivated being far away from her classmates in India.

Ganesan will return to Boston next semester because Berklee is starting a hybrid model. However, most of her classes will still be online.

“I feel like I need to be in that environment again. I noticed when I was home, I couldn’t get myself to write any music and I felt so stuck,” she said. “I feel like getting back into that community will help.”

Fernando Brandao, a professor of ensembles at Berklee College of Music, said that he had one week to reorganize his classes and learn computer programs such as Logic Pro, where he created his own soundtracks without different instruments so that each student could practice their respective instrument on their own.

“It was a little hectic, especially in my case, because I teach many Brazilian ensembles and I don’t have many ready-to-go playback tracks, so I had to write the melody, drums and bass,” Brandao said. “It is a completely different experience because they cannot really play together on Zoom.”

For Matt Fishman, a fourth-year mathematics and music double major at Northeastern, the transition was especially difficult because he was looking forward to his final performance.

“It sucks being a senior, I had these plans laid out,” Fishman said. “I was going to audition to be the senior who plays a solo piece at the final concert, but that probably won’t happen for my last semester which is a real bummer.”

Fishman also had to cancel his passion project “The Soldier’s Tale” three weeks before the scheduled performance. He said it’s possible it could be done next semester, but it is not confirmed.

“With COVID-19, it’s been pretty much empty every day that I have worked,” said Holt, who works in the theatre department office. “There may be one or two people that pop in, but they are only coming in to speak with whatever staff is there during that time.”

For Holt, his stage combat course has not changed much and he attends class in person. They are not able to have physical contact, so they complete different punches and chokes in the air and also use a striking dummy.

Although students have lost a lot of the experiential learning component that comes with arts courses, they’re grateful for what they have received.

“The fact that we were able to rehearse at all in person is huge. We are so lucky to even be in the same room as each other,” Fishman said. “The first rehearsal just felt so good because the entire spring and summer I did not play music with anyone in the same space.”

Ultimately, the COVID-19 pandemic has forced people to adapt to their situation. Like so many others, Bennet, who directed an online show, learned a lot from the changes that were brought on by the pandemic.

“I’ve learned more than I probably would have ever learned having done a normal production,” she said. “I think it stretched my brain differently.”