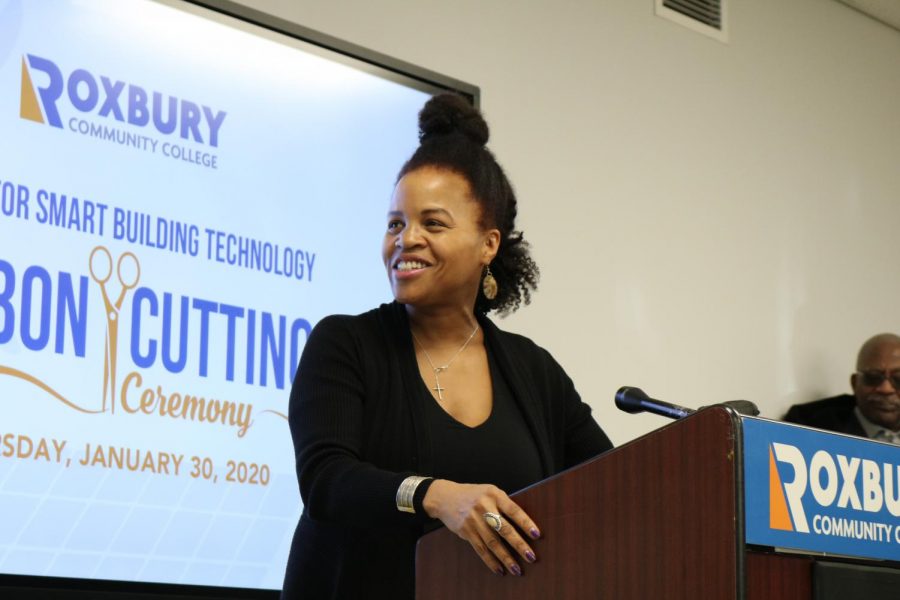 Janey speaking at the opening of the Center for Smart Building Technology at Roxbury Community College in February, 2020.

City Council President Kim Janey is in position to become the first Black person and first woman to serve as mayor of Boston.

According to Boston’s city charter, Janey’s position as council president makes her the automatic replacement if Mayor Marty Walsh steps down, a likely occurrence due to the recent nomination of Walsh as Labor Secretary by President-Elect Joe Biden. Janey will serve as mayor once Walsh’s nomination is confirmed by the United States Senate and he assumes his role in the new administration.

Janey became a city councilor in 2018 and council president in January 2020. Over the past year, she has advocated for police reform, child welfare and improvements to the city’s education system. She represents District 7, which includes Roxbury and Dorchester — communities that have struggled in the wake of the COVID-19 pandemic.

When Janey was sworn in as council president on Jan. 6, she noted in an interview with The Bay State Banner that her vision for the year was to “lift up those who have been left behind.” She also added that the Council’s number one priority for the year would be equity and inclusion. Later that month, when choosing the City Council committees, Janey emphasized the necessity of diverse political bodies.

“For young people who are looking to this body, it’s important for them to know that they have leadership that looks like them,” she said.

If Janey assumes the mayorship, Black women would lead seven of the 100 largest cities in the United States, according to Rutgers University’s Center for American Women and Politics.

Both City Councilors Michelle Wu and Andrea Campbell have announced their bids for the 2021 mayoral election.

Walsh has served as mayor for over seven years and has several connections to the city’s labor unions. He joined his first labor union, Laborers’ Union Local 223, when he was just 21. He later went on to serve as its president. As Labor Secretary, Walsh would oversee more than 150 million Americans dealing with workplace safety issues, worker’s compensation and other protective laws.

Walsh has not responded to questions regarding when he will leave office or whether his departure is imminent.

The last time a City Council President became acting mayor was in 1993, when President Bill Clinton nominated then-mayor Raymond Flynn as U.S. ambassador to Vatican City. Flynn was replaced by Thomas Menino, who then ran in later mayoral elections and held the office for more than 20 years. There have been just five different Boston mayors in the past 50 years.