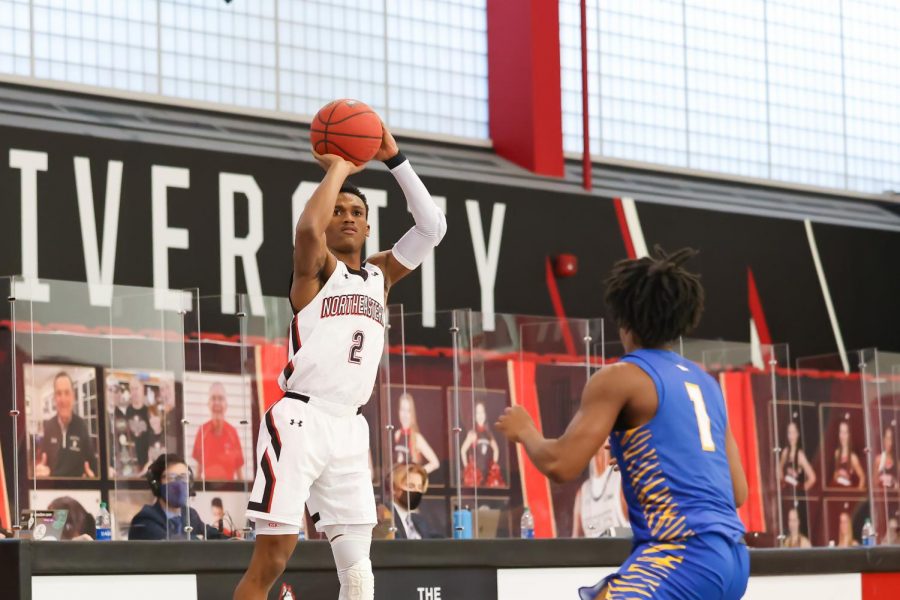 The Huskies came back from deficits of 19 and eight to win both games in their weekend series against the Hofstra Pride. Sophomore guard Tyson Walker was the Huskies’ spark all weekend, finishing with nine assists in the first game and 23 points in the second.

Last year, Hofstra (4-3, 2-2 CAA) and the Huskies (5-5, 4-0 CAA) played in the CAA Championship. In that game, Hofstra came out on top after sweeping the season series themselves.

“It felt good [to win] because last year we lost all three games to them,” Walker said. “One that we had, and then we lost it and then another one that just kind of gave it away, so it felt good to actually win these two.”

Walker finished with 34 points and 14 assists on the weekend, cementing himself as the go-to guy on Huntington Avenue.

At halftime, things looked bleak for the Huskies. They had given up 12 first-half points to Hofstra junior forward Isaac Kante and were down 46-29. It looked like they were headed for their first CAA defeat in the 2020-21 season.

The Huskies never gave up.

In the second half, the Huskies only turned the ball over three times and found easy buckets as they slowly cut into their deficit. Down by 12 with 13:05 to play, redshirt junior Jason Strong knocked down a three and sparked the Huskies to a 22-5 run.

With 6:54 to play, Strong hit another three pointer and the Huskies led for the first time this game. It was a fight to the finish as both teams battled, and with the score tied at 68, NU ended up with the last shot with 1.8 seconds to play.

Redshirt sophomore guard Shaquille Walters inbounded the ball to freshman forward Jahmyl Telfort, who put up a 35-foot prayer. It was not answered, however, and an overtime period ensued.

Walters dominated the extra period, scoring nine points off three triples to give the Huskies an 81-78 lead with three seconds to play. Telfort could have iced the game with a free throw opportunity, but could not convert. Hofstra missed a three as time expired and the Huskies escaped Long Island with a win.

The first half was turnover-ridden as the Huskies coughed it up 12 times and allowed the Pride’s lead to balloon.

Hofstra was also on fire in the first half, making 57.6% of their shots en route to 46 total first-half points. The Huskies had trouble with making threes in the first half, only shooting 2-for-12 from deep and assisting on six baskets.

In the second half, however, the Huskies turned the ball over only three times and found open looks, knocking down 55.6% of their shots and assisting on 14 baskets.

“In the second half we were a lot better at finding cutters and getting into the seams of the zone and penetrating and finding teammates,” head coach Bill Coen said. “When you’re sharing the ball — that’s always a big metric for us, assisted baskets — and certainly in the second half it was a different story.”

Walters finished with a game-high 20 points for the Huskies, but also sprinkled in seven rebounds and six assists. He made some of the biggest plays of the game in overtime, knocking down three triples and securing the win.

“What can we say about Shaq Walters coming down the stretch,” Coen said. “He made big shot after big shot.”

On top of Walters’ performance, Strong showed his range, going 4-for-5 from deep and fueling the comeback, scoring 16 of his 18 points in the second half. He also had a good day on the boards, pulling in six rebounds.

Sophomore guard Tyson Walker also had a big day, notching 11 points and a career-high nine assists. He wasn’t as involved in the scoring as he usually is, but his skills as a facilitator and distributor gave his teammates plenty of open looks.

Off the bench, sophomore guard Quirin Emanga contributed nine points and eight rebounds, the most by any NU player. He also was able to be physical with Kante, and was part of the reason Kante only scored five points in the second half.

“I thought [Emanga] did an unbelievable job of giving us that inside grit and toughness that allowed us to settle the game down,” Coen said. “He just gave us that backbone that we needed to allow our team to get a little more confident.”

Overall, each player showed grit and determination to bring them back from a 17-point deficit. Without redshirt sophomore and redshirt junior big men Chris Doherty and Greg Eboigbodin, they were still able to pull out a win on the road. Coen said that this team is very coachable and wants to win every game they play.

“They want to get better, and they want to win. We saw guys step up and make plays,” he said. “When you have a locker room like that, when you have a leader like Tyson Walker and Shaquille Walters, those guys are gonna keep the younger guys in line and teach them the right way — how to compete, how to do it the right way and how to stay in the fight.”

The Huskies erased an eight-point second-half deficit thanks to the three-point shooting of Walker and went on to win their fourth straight conference matchup over Hofstra Saturday afternoon at the Cabot Center. Walker finished with 23 points and five assists, but notably hit five second-half treys to fuel his team and spur them to victory.

With 12:44 to play, Walker ended a 16-0 Hofstra run with his first three of the second half. From there, he started firing, draining threes straight from downtown. His fifth three gave the Huskies a 48-47 lead with 7:22 left in the game. From there, the Huskies were ready to dispose of Hofstra, finishing out the game with an 11-point margin and winning 68-57.

“I was really proud of our guys being able to recalibrate in the heat of the moment,” Coen said. “Tyson [Walker] just willed us back into the game and then everybody else joined the party and settled down.”

Overall, the Huskies did not attack the basket as often as they have in previous games, only shooting three free throws, but fired away from deep with 37 attempts. The matchup-zone that Hofstra employed gave the Huskies free reign from beyond the arc, but limited their ability to get into the paint for easy twos.

“That’s what they give you,” Coen said. “They play the matchup zone, they’re very good at not fouling year-in and year-out, they’re one of the best teams in the country at not fouling, so you’re not getting any free points there.”

With both Eboigbodin and Doherty coming back from injuries, Emanga got plenty of time on the floor in his first career start. He scored 14 points and was impressive on defense as well, providing energy and grit in a close game.

“Q [Emanga] just brings a lot of fight on the court,” Walker said. “So everybody feeds off of that.”

Strong also had a solid outing, icing the game with a three-pointer that put his team up by seven with less than a minute left. He finished with 11 points and also grabbed five rebounds.

Beyond Walker, Emanga and Strong, no other Husky finished in double figures points-wise, but everyone contributed in one way or another. Telfort had seven points and grabbed nine rebounds and assisted on four baskets, and Walters had seven points along with a game-high seven assists. Coen was pleased with everyone’s effort on the offensive and defensive end.

“We got tremendous effort from a lot of guys,” Coen said. “What can you say about Quirin Emanga, stepping up in his situation, trying to play a physical post player like [Kante]…Shaq Walters doing a tremendous job on [senior guard] Jalen Ray, and everybody kind of had their moment.”

After sweeping Hofstra, the Huskies will travel to Charleston, S.C. to take on the College of Charleston next Saturday at noon. They’ll look to extend their unbeaten run to five games in a row.