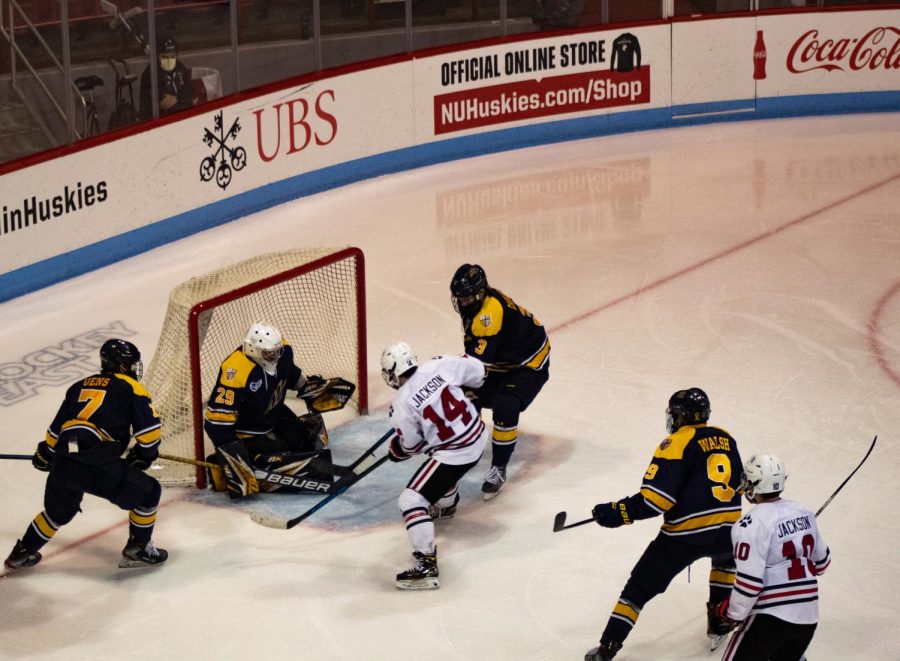 The Huskies sweep Merrimack this weekend in home-and-home series.

The No. 14 Northeastern men’s hockey team closed out the weekend with a sweep of Merrimack College, winning Saturday night’s game at Matthews Arena 3-2 in overtime and taking Sunday afternoon’s game at Lawler Rink 3-2 in regulation to improve to 5-3-2 (5-3-2 HEA) on the season.

The Huskies were supposed to participate in a home-and-home series against UConn this weekend, but a positive COVID-19 test on the UConn team resulted in the university pausing all men’s hockey activities.

Northeastern’s status for the weekend was in limbo until Hockey East announced Friday that they would participate in a home-and-home series against Merrimack, who they opened the season against last month, outscoring the Warriors 14-5.

“It’s kind of when and where at this point,” said head coach Jim Madigan following Saturday’s win over Merrimack. “On Wednesday night, we found out we were going to be canceled with UConn and we came to the rink on Thursday and practiced as if we were playing on Friday. We were upbeat. We had a good practice on Thursday and when the message came down on Friday morning that we had a chance to play Saturday and Sunday we jumped at it. It’s going to be a unique situation all year long.”

When the puck dropped Saturday at Matthews Arena, the Huskies weren’t ready to go.

The first period was one to forget for NU, who allowed Merrimack sophomore forward Filip Forsmark to score his first goal of the season at 8:18 on a rebound given up by sophomore netminder Connor Murphy. Northeastern took two penalties in the period and, at one point, were forced to play 4-on-3 hockey. The penalty kill was strong, but it didn’t give the team enough energy to get anything going offensively.

The Huskies also had some opportunities on the man advantage, but Merrimack kept the top power play in Hockey East at bay.

The power-play opportunities continued to come for NU during the second period, but again, Merrimack was able to keep the Huskies scoreless.

Merrimack’s fourth line was particularly potent Saturday night. Junior forward and team captain Chase Gresock joined Forsmark on the scoresheet at 11:09 in the second period with a backdoor goal that beat Murphy to give the Warriors a 2-0 lead.

“The first two periods obviously weren’t to our liking and credit Merrimack because they played hard, they were on us and we weren’t in sync,” Madigan said. “We didn’t play smart moving the puck. We didn’t execute around the net. We did have some looks and didn’t execute.”

Although Murphy allowed two goals on Saturday night, Madigan thought the netminder played solid hockey, giving NU every opportunity to walk away with a victory.

“I thought [Murphy] played very well. He gave us the chance to win the game,” Madigan said. “We’re down 2-0 going into the third and he made some big saves there and settled it down. He was really good.”

Down two goals, the Huskies entered the third period with their backs against the wall. However, they were given life when redshirt senior forward Grant Jozefek scored on a penalty shot at 5:27 after being hooked by a Merrimack defender to cut the Warriors’ lead in half. It was Jozefek’s second goal of the season.

“When Jozie (Grant Jozefek) got that breakaway and got that penalty shot and he put that in, we got a lot of momentum from that,” freshman forward Dylan Jackson said. “When someone scores, it just gives everyone energy on the bench and we all have a better mood, so when that happens we all get more energy and just try to keep it up and get our legs going.”

NU, particularly freshman forward Gunnarwolfe Fontaine, used that energy to tie the game 2-2 at 16:50 for his third goal of the season.

“He got in the right spot and that was a bar down goal and a really nice shot,” Madigan said of Fontaine. “He’s playing well, but there’s even a higher ceiling for him. He’s still getting acclimated nine games into this league where he can continue to be more of a threat offensively. He’s getting good looks. He’s working and he’s more and more comfortable out there on the ice.”

Fontaine’s goal pushed the game to overtime, where freshmen forwards Ty and Dylan Jackson combined to score the game-winning goal to give the Huskies a 3-2 win — something the brothers are accustomed to at this point in their careers.

“[Ty and I have] been playing together for 15 years now, so we have that chemistry and when we get the two-on-ones, we obviously practice a lot in practice,” said Jackson. “We kind of know where each other are going to be and what we’re going to do, so I think that helps out a lot.”

In a matchup against Merrimack again Sunday, Madigan knew it wouldn’t be easy to come away with a win on the road.

“We’re just going to have to defend better against all four of their lines because they’re a good hockey club and they’ve got good balance. We need to compete and battle for 60 minutes, not 20 minutes.”

Sunday’s game was anything but easy for Northeastern. However, the team got out to a much better start against Merrimack at Lawler Rink in Andover, Massachusetts.

Sophomore forward Matt Demelis opened the scoring at 14:50 in the first period, putting one past Merrimack sophomore goaltender Troy Kobryn with a quick shot in the slot. Demelis’ linemate and sophomore forward Riley Hughes scored shortly after at 16:06 to give NU an early 2-0 lead entering the second period.

The goals kept coming for the Huskies in the second frame when freshman forward Dylan Jackson scored his second goal of the weekend at 1:56 to give NU a 3-0 lead.

“Those are big plays for us and I think [Fontaine] shot it and he’s got such a heavy shot that [Jackson] came down on the puck and scored,” Madigan said following the win. “It ended up being the game-winning goal. [The Jackson twins and Fontaine] are playing well and they’re getting points.”

Later in the period, though, Warriors junior forward Logan Drevitch scored at 11:16 to cut the Huskies’ lead to 3-1. Drevitch’s goal shifted the momentum Merrimack’s way, something Madigan addressed between the second and third periods.

“The message was to just stay the course and just keep playing the way we played to get to a 3-0 lead,” Madigan said. “Merrimack is very good, so the message was to play to our identity and play to the way that we need to be successful.”

The Warriors entered the third period with hopes of cutting NU’s lead even further, and they did just that. Merrimack sophomore forward Mac Welsher scored at 11:12 in the third frame, putting the Huskies on their toes for the final minutes in Andover.

Welsher’s goal wasn’t enough, though, as the Huskies held on to snag their fifth win of the season.

“I don’t know what the point totals are, but basically two wins in the weekend, you’re happy,” Madigan said. “[Merrimack] is a hard team to play against in this building where they hold home court really well. I really liked how our guys battled.

The Huskies will host the University of New Hampshire Jan. 13, 6 p.m. at Matthews Arena for the first time this season.