No. 3/4 women’s hockey registers a tie against UNH, falls in the shootout 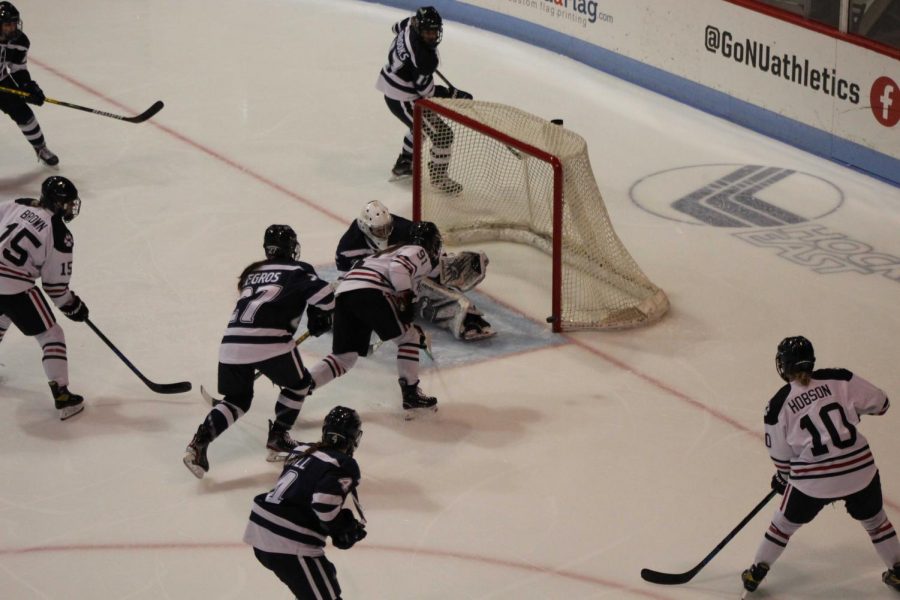 In a shootout, the Huskies fall to New Hampshire, losing in overtime 2-2.

In another close game against the University of New Hampshire Wildcats, the No. 3/4 Northeastern women’s hockey team got off to a slow start and had a bounceback second period. This time though, their bounceback wasn’t enough, as an unlucky UNH third period goal tied the contest in the third and the Huskies were unable to get a goal in the shootout to claim a win, giving them a 2-2 draw with UNH in NCAA’s new overtime rules while the Wildcats get an extra point in the season standings for winning the shootout.

“I thought right out of the gate, we were not mentally in it at all. I think that that’s an issue that [the players are] very well aware of, I think it’s an issue that they need to fix. We can as a staff give them all the X’s and O’s … but at the end of the day, we’re not making passes, we’re not taking shots, we’re not going to the net,” said associate head coach Nick Carpenito. “I think we need to take a pretty good look at ourselves and make sure we’re giving our best effort. At the end of the day, we just need to forget this and move on.”

Carpenito mentioned that there is quite a lot going on in the world at the moment that could draw their players’ focus away from the game, and it will take toughness and leadership from the captains of the team to clean up some of their mental errors from today.

“It comes from within … I can’t personally prepare each player mentally,” Carpenito said. “A big onus of it is on themselves, and that’s an area where we need to be a lot better.”

Redshirt junior forward Paige Rynne was the hero for the Wildcats (3-8-1, 3-8-1 HEA) in the end, as the extra skater picked up the only goal in five rounds of shootout play, barely beating senior goaltender Aerin Frankel to end the contest. NU (4-1-1, 4-1-1 HEA) initially went down 1-0 in the contest following another slow start, their fourth-straight slow first period.

The Wildcat’s early tally came from freshman winger Nicole Kelly, who got behind the defense after receiving a stretch pass from junior defenseman Emily Rickwood, who had an excellent game on the backend for the Wildcats. Kelly was able to sneak past NU senior defender Skylar Fontaine before receiving the pass, giving her a one-on-zero chance against Frankel which she cashed in on for her third goal of the season.

Kelly’s chance came from what looked to be a bit of a miscommunication on the defensive end, which plagued Northeastern at times during the game.

“I think that communication is a big part of it. I can remember a play at the end of the first [period], a simple takeover that we didn’t execute because one player didn’t know it was coming. We need to be better. At the end of the day, there’s no ifs, ands or buts about it,” Carpenito said.

In the second period, NU showed why they are ranked top five in the nation, something that has become a trend early in the season. They finally got a powerplay goal today though, as a strong cycle found senior blueliner Brooke Hobson, who was ready to crush a one-time shot from the high slot to tie the game and earn her second goal of the year.

“Our issue on the powerplay before was just again, the execution, the mental side of things. I thought our second period was our best period,” Carpenito said. “I think we were most mentally in it in the second period and showed if we can execute with the talent we have on this team, we can do a lot of damage. The challenge for us right now is executing consistently.”

NU carried the momentum they built in the second into the third, and junior forwards Alina Mueller and Chloé Aurard were able to capitalize together. Aurard worked hard to keep the play alive deep in UNH’s zone and found her linemate Mueller out front, giving Mueller a chance to give the Huskies a 2-1 lead early in the third.

They could only hold it for so long though, as a hard luck bounce tied the game with just under three minutes to go. Freshman center Chavonne Truter ripped a shot wide of the net which bounced hard off the boards behind Frankel’s cage. Frankel went to seal her right-side post as the puck continued to bounce, but unfortunately for her, the puck happened to hit her pad and bounce into the net.

In overtime, the Huskies had multiple beautiful shots on net, but redshirt junior Ava Boutilier shut the door with authority, standing on her head as the Wildcats had to kill a penalty to send it to a shootout. Boutilier finished the contest with 30 saves on 32 shots. NU came up empty handed in the shootout, giving UNH the chance to pick up an extra point in the standings.

The Huskies’ next contest comes Tuesday night at Matthews Arena against the Providence College Friars (7-1-1, 7-1-1 HEA).