No. 4 women’s hockey picks up momentum swinging 4-0 win against No. 7 Providence 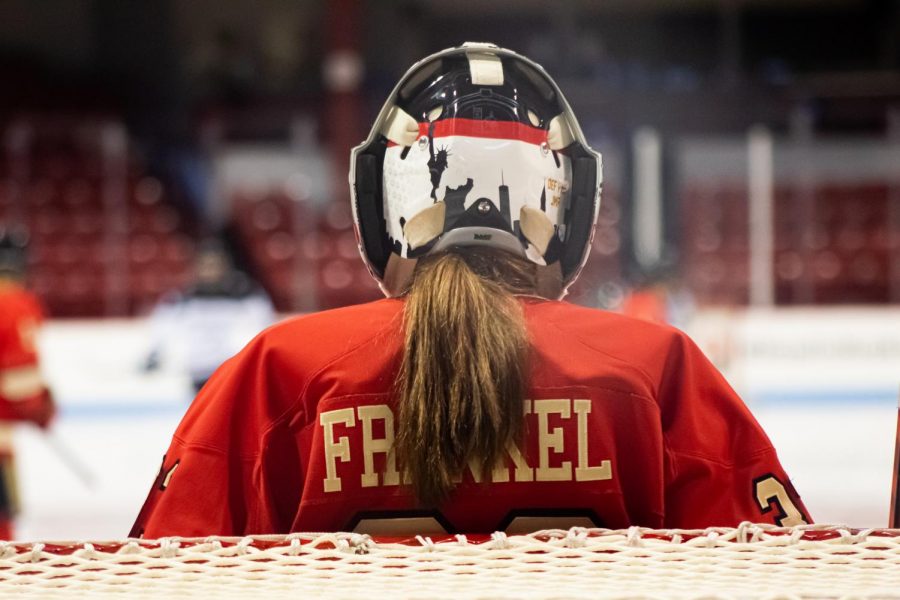 Senior netminder Aerin Frankel notched 32 saves and shut out the visiting Friars in the Huskies' 4-0 victory.

You may have heard this one already: The No. 4 women’s hockey team found themselves in another defensive battle early Tuesday evening, but took control in the second period, this time against the visiting No. 7 Providence Friars.

The Huskies (5-1-1) came out on top in the end 4-0. Once they got the scoring going, they didn’t stop and were able to put together one of their strongest contests yet this season to bounce back from a disappointing series against UNH (3-8-1, 3-8-1 HEA) over the weekend.

“As far as today goes, I thought that it was by far our most complete game of the season,” said NU associate head coach Nick Carpenito. “I thought we were moving our feet very well, I thought we were executing very well. We had a pretty specific game plan going into this game, and I thought we executed it to a tee.”

Senior blueliner Skylar Fontaine impressed tonight, notching the game-opening goal and following it with an assist 25 seconds later. Her goal came on a bullet of a short-side shot while she earned her assist with a laced centering pass to sophomore winger Peyton Anderson, who was bumped up to the first line this evening for the first time this season. Fontaine now leads the Huskies with six points on the season.

“I think we just came into the game wiping the weekend away and saying ‘We are a better team than what we have been showing. Let’s come together, let’s be a family’,” said Fontaine, who also mentioned that the team emphasized taking advantage of every opportunity during a COVID-affected season.

“We were just really trying to get out there and use our speed, use our simple plays, get the puck in the net and hopefully we would come out with the win,” she added.

Star senior goalie Aerin Frankel continued her all-nation season, notching her third shutout of the season with 32 saves. Friars’ (7-2-1, 7-2-1 HEA) senior goalie Sandra Abstreiter impressed in the opposite crease, keeping the surging Huskies at bay the best she could with 33 saves on 37 Husky shots. Two of the Huskies’ goals came on open breakaway plays, so while Abstreiter’s save percentage was below 90%, her in-game performance was much stronger than that.

Both Husky special teams units got plenty of work as well, with the power-play unit finishing 1-for-5 on their chances while the penalty kill squad blanked the nation’s best power play unit four times, including a two minute five-on-three chance in the game’s closing minutes.

“When someone blocks a shot, our whole bench goes crazy. I think that’s a big momentum booster when we’re on PK,” Fontaine said. “If something shifts, we all shift and we’re just very solid in that front.”

The Huskies had a strong first period after being plagued by slow starts until tonight. NU took advantage of tired Friar legs to staple them in their end as the Providence skaters iced the puck a few times and forced themselves to play long shifts, an especially costly mistake as they dressed three less skaters than NU tonight. The Huskies were able to win the shot battle 13-7 and control puck possession throughout the first 20 minutes, a change of pace compared to their previous contests.

“Towards the end of the game … it was pretty clear that we started to wear them down a little bit,” Carpenito said, highlighting their puck possession early on.

The Huskies continued to wear on the Friars in the second, and late in the period, they were finally rewarded. NU’s fourth power play of the game proved fruitful after a long stretch on the delayed penalty, and just six seconds after their one-skater advantage officially started,  Fontaine cashed in from the right circle, beating Abstreiter short side to give NU their second power-play goal in two games after being shut out on special teams prior to Saturday’s game against UNH.

“I noticed that I had a ton of room to walk into the zone,” Fontaine said of the moments before she took her shot.

Once the Huskies broke the dam, it didn’t take long for them to cash in again. 25 seconds later, Fontaine got herself another point, centering a pass to sophomore winger Peyton Anderson who took a close-range shot that Abstreiter just tipped. The puck just barely snuck through, and neither Abstreiter nor her defenders could beat Anderson to the puck, allowing the nearly minted first-liner to tap the puck in and finish her own shot for her first goal of the year.

“In all honesty, I actually thought that that was probably the best game that Peyton’s played in her time at Northeastern,” Carpenito said. “She’s got a ton of grit, she’s got a ton of skill, she’s got great speed. For us, we wanted to just get a little bit more jump out of that first line and I think that Peyton was definitely the right person to do that.”

The Huskies cemented their lead midway and late in the third as redshirt senior forward Andrea Renner and junior winger Chloé Aurard each picked up one-on-zero goals against Abstreiter, each grabbing their second goal of the campaign.

Renner leaked out of the Huskies’ zone as the Friars got aggressive down late in the game. Renner’s sly play enabled freshman defender Abbey Marohn to pick up her first collegiate assist with a nice stretch pass to the streaking winger for a free breakaway chance. Aurard’s goal came from a scoop and score as she grabbed a loose puck and ripped down the ice to give herself a chance to follow up Renner’s nice deke with one of her own.

NU’s next contest had been scheduled for Friday afternoon against Boston University (1-2-0, 1-2-0 HEA), but since it has been postponed, their next game on the docket is scheduled for Jan. 22 against Holy Cross (3-8-0, 3-8-0 HEA). The way scheduling has worked this season though, the Huskies could find themselves an opponent to replace BU sometime this week.

“Everybody knows that this is going to be an odd season,” Carpenito said. “Our message is just be ready for anything… We got our weekend canceled, but you never know… We could find out Friday afternoon that we’re playing Saturday night.”