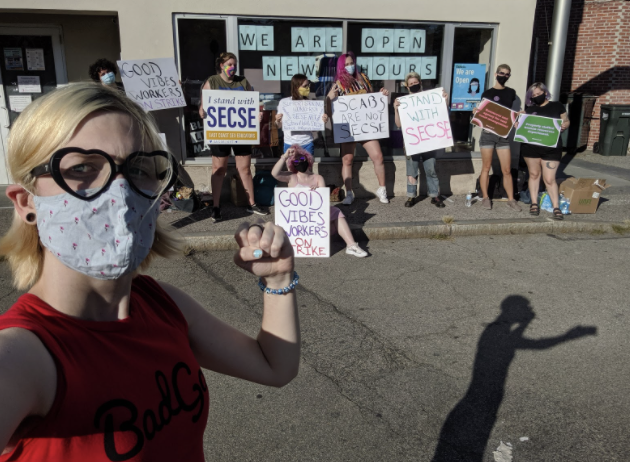 Carpenter and others striking against Good Vibrations asked for the removal of floor models and tester toys and improved communication, among other demands.

Aug. 15 is a day that Aria Carpenter will never forget. With her fellow workers supporting her, she staged a walkout at Brookline’s Good Vibrations, a sex toy retailer focused on sex-positive education and LGBTQ+ inclusivity. The action led to a six-week-long strike and a quest for heightened workplace safety during COVID-19.

The employees at Good Vibrations had already faced communication and management issues prior to the onset of the pandemic. When COVID-19 began, the problems worsened. Many workers mistakenly thought if they did not come back to work that they would be fired, since management had not told them otherwise. They also worried about the floor models in the stores, since customers could still touch testers, like vibrators and other toys. Keeping track of what needed to be sanitized became difficult.

Throughout the summer, the staff shared their mutual concerns with each other and Carpenter decided action was necessary.

“We started to communicate with each other in a way we hadn’t before,” Carpenter said. “I’ve been saying this to any people who seek to organize in their workplaces anywhere. Step one is to listen to your coworkers and take their concerns seriously. You know, it’s not against anybody’s rules to say ‘How are you doing?’”

The Good Vibrations strike was only one in a series of labor actions across the nation that were sparked during COVID-19. Workers everywhere are fighting to ensure their health and safety now more than ever.

According to Payday Report’s COVID-19 Strike Wave map, there have been more than 1,100 wildcat strikes since the beginning of March, including the Good Vibrations strike, yet the numbers are likely higher than what has been tracked since many strikes are not reported at all. A wildcat strike is a strike organized without the consent of the employees’ unions, giving the company no prior notice. Though the Good Vibrations employees are not unionized, their taking the company by surprise and having no institutional backing was what made this a wildcat strike.

Because the Good Vibrations headquarters is in California, the Brookline and Cambridge locations repeatedly experienced failed communication between management and frontline employees. With only 12 employees across both Greater Boston locations, Carpenter said their concerns about safety were often ignored. Five employees had quit in the month leading up to Aug. 15, and she feared her community was crumbling. This inspired her to lead the walkout.

After receiving no response from the company for five days following the walkout, Carpenter and her coworkers formed a collective, called Solidarity with East Coast Sex Educators, or SECSE. They created a social media campaign, a petition and a GoFundMe fundraiser and began picketing outside the Brookline Good Vibrations location a week after the walkout. Because there were so few strikers, they could not always cover both locations.

The striking workers compiled five demands. In response to the pandemic, they asked for floor models and tester toys to be removed and better communication from the company regarding COVID-19 policies. When Good Vibrations first reopened after the spring shutdown, the employees found out about their recall process via a June 30 Instagram post and had no notice that they were being asked to work.

“We need constant updates right now when our livelihoods are in danger,” Carpenter said. “It’s people’s lives on the line. Even though these businesses are in debt, it becomes this debate around what’s more important, risking lives or saving the economy?”

Emily A. Spieler, a labor law professor at Northeastern University, said there are protections for those who go on strike.

“Under the National Labor Relations laws, they have a right to organize around health and safety issues, and the law says that they have a right to take action for mutual aid and protection, including striking,” Spieler said. “So, at least theoretically, people shouldn’t be fired for taking part in a strike.”

Despite this, going on strike is still scary, Carpenter said. She enlisted the help of organizations in the city, including the Boston Democratic Socialists of America, or DSA, and the Emergency Workplace Organizing Committee, or EWOC. Members of the organizations joined the picket lines along with the employees. Both groups encouraged her to escalate to draw management’s attention. There had been a series of Zoom calls between upper-level management and the Boston employees, but Carpenter did not feel that their demands were being met.

Tristan Bock-Hughes, one of EWOC’s lead organizers, said that EWOC got people in California involved as well. Labor organizers in the Bay Area started conversations with Good Vibrations employees there, which drew more attention.

“We were able to get a little bit of a national connection going there,” Bock-Hughes said. “I’m not going to lie. If I was a boss, that would be freaky to me, hearing that this thing that was happening at one store on the East Coast was suddenly, two days later, being talked about by customers and staff on the West Coast.”

Lisa Xu, co-chair of the Boston DSA Labor Working Group, said DSA members also provided ground support. The DSA worked to promote the SECSE social media presence by republishing their posts. One of the DSA’s goals is to create an ideal society where workers’ health and safety are prioritized, which is something Boston is not doing effectively,  Xu said.

“That’s why labor solidarity is important,” Xu said, “because I think workers are always on the frontlines of these fights for health, safety and equity in the community.”

For weeks, Carpenter and her fellow workers picketed every day, rain or shine. They got signatures on their petition, which has been signed by more than 1,500 people. For the entirety of the strike, workers were still collecting wages thanks to the GoFundMe fundraiser, which has raised more than $8,800.

Picketing was exhausting, Carpenter said. New employees were brought in to take the striking workers’ positions, and they knew Good Vibrations was trying to wait them out. Gradually, only three workers were left striking, which was a stark contrast to the 35 workers and supporters at the first strike on Aug. 22.

“You have an institution sitting right behind you in that building that is deciding your fate,” Carpenter said. “A new worker would come in to keep the store open despite the strike. You had to think to yourself, ‘Is that my replacement?’”

The company called the police on the strikers Sept. 4, but no action was taken since the strike was legal.

Good Vibrations declined to comment after repeated emails and phone calls were made, with a spokesperson responding that “no one is available to speak to this.”

On Sept. 27, an agreement was reached, and by Sept. 30, mediation had begun. The company agreed to remove floor models from the store, bi-weekly check-ins for raises were established and they promised new regional management. By the end of mediation, the original 12 workers became two, due to the strenuous effects of striking for so long. Carpenter and one other worker are the only strikers who returned to Good Vibrations.

What they were able to accomplish with a small strike was unprecedented, said Bock-Hughes, the EWOC leader. Their customer base’s support was key, since it gave them more local leverage. Carpenter and her co-workers are also embedded into the LGBTQ+, sex positivity, kink and education communities, which provided them a radical network.

Now, Good Vibrations is still open and Carpenter hopes for a future at the company where workers have a voice.

Ally Lowitz, the co-president of NU SHARE, Northeastern’s sexual health advocacy club, visited the store in November. She said she felt safe and praised the store for putting away the testers, adding that workers could show her products if she asked. Overall, though, not much has changed.

“The experience is pretty much the same. You can walk around, you can ask questions,” Lowitz said. “You feel so welcomed, and there’s nothing to be embarrassed about.”

This experience is the result of Carpenter’s fight. She added that she could not have done it without the people around her.