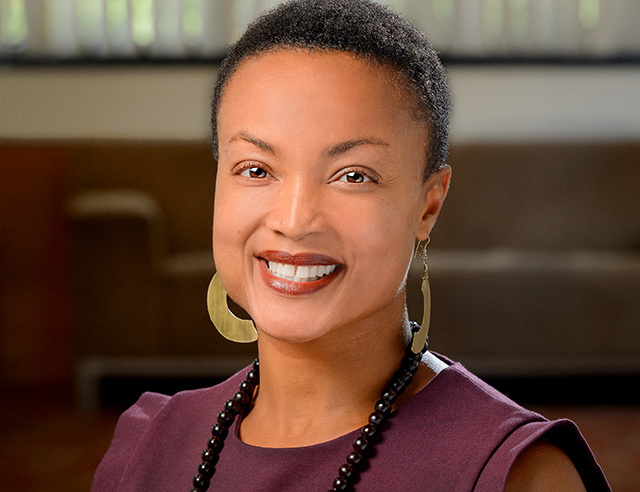 Shalanda Baker is joining the Biden administration as deputy director for energy justice at the Department of Energy.

For Shalanda Baker, her new role as deputy director for energy justice in the Office of Economic Impact and Diversity at the Department of Energy, or DOE, isn’t just a new job. As she says, it’s a culmination of her entire career.

“It’s such an honor and privilege to be in this role,” said Baker, who was sworn in to the position last Wednesday by the newly inaugurated President Joe Biden — an experience, she said, that was “surreal.”

Baker is on a professional leave of absence from her role as a professor of law, public policy and urban affairs at Northeastern, where she has taught in the Northeastern University School of Law, or NUSL, and the College of Social Science and Humanities since 2017.

“For me, it really feels like a culmination of my career and the lifetime of work that I put into issues of equity and justice,” she said.

Margaret Burnham, a university distinguished professor of law at NUSL, said that Baker is well suited to take on a role at the DOE.

“I couldn’t think of a more appropriate person for this position, given what I know about Professor Baker’s reputation in the activist community,” said Burnham, who also is the director of the Civil Rights and Restorative Justice Project at NUSL. “What Baker has been able to do is bring that community … into conversation with government and policy makers, so that, first of all, that community can be both fully informed but also fully effective in their efforts to inject the concerns of people of color and marginalized communities [into] the conversation about energy.”

Baker’s diverse skill set, Burnham said, will be a large benefit as she steps into her new role in Washington, D.C. Along with rejoining the Paris Climate Agreement, Biden has outlined ambitious plans for climate change, such as switching the United States to completely clean energy by 2035 and a net-zero emissions and 100% clean energy economy by 2050.

“She’s right at the forefront of what this administration expects to be rolling out over the next four years,” Burnham said. “I can’t imagine a better person to be part of this administration’s effort to make a dent in this long-standing and fractious discussion about the future of energy in our country.”

Baker’s announcement follows the news of Mayor Marty Walsh joining Biden’s cabinet as labor secretary. If the proposed candidates are confirmed by the Senate, Walsh will join the most diverse cabinet in U.S. history.

Baker’s work with the administration will focus on racial and social justice within the country’s energy systems – something she calls energy justice.

“[Energy justice] is ensuring that the benefits and burdens of our energy system are equitably shared,” she said. “It’s also ensuring that people have a seat at the table in terms of decision-making concerning their energy future, as well as economic justice and ensuring that, again, those benefits of the system can float up to individuals.”

She explained that energy justice is something both practical and theoretical; it’s something ambitious and forward-looking. Put simply, it’s a concept and framework that can be used to implement energy policy.

Her work centers around issues related to those in the Black, indigenous and people of color, or BIPOC, community, as well as those who have been traditionally excluded from participating in the energy system. Some people of color have historically been excluded from these systems due to financial burdens or inaccessibility. Baker said her analysis and work typically centers around the “concerns, hopes and dreams” of the BIPOC community.

After graduating from the Northeastern University School of Law in 2005, Baker began her career as a project finance lawyer and gained expertise while assisting in the creation of large-scale energy projects. She intends to bring this expertise to her position at the DOE.

As a former professor at the Richardson School of Law at the University of Hawai’i from 2014 to 2017, she founded the Energy Justice Program and later the Initiative for Energy Justice. These experiences, she said, served as an introduction to the field of energy justice and the importance of it.

“These are the same communities that are on what we call the frontlines of climate change. They’re going to be the first and worse impacted, and the more that we can sort of shore up their communities, the better,” she said. “I’m excited about actually making a tangible difference in those communities.”

As a woman of color, Baker said she’s thrilled to have “a seat at the table,” working in the highest office for her field, especially amid a racial reckoning that began this summer.

“I’m also just excited to learn how things work … really getting into the nuts and bolts, the weeds of the energy system and getting into the weeds of energy policy in particular,” Baker said. “This is what we’ve been fighting for … to have someone like me with my background, interests and expertise at that table is just phenomenal.”

As Baker prepares to implement meaningful change, she said she feels hopeful for the future.

“As we’ve seen this new wave of appointees get announced, there is so much hope [that] we are all champing at the bit,” she said. “I’m looking around the administration and seeing so many social justice leaders who care about issues of climate justice [and] environmental justice, so I’m really excited to work across the administration.”

Baker said that her work has only just begun.

“In America, it feels like we believe in this place, and we believe that change is possible,” she said. “We’ve heard calls for racial justice, but if you look at my work, you know that I’m deeply committed to it. I’m not going to go in there and just sort of collect the government paycheck, right? I’m ready to do this work and change the world.”