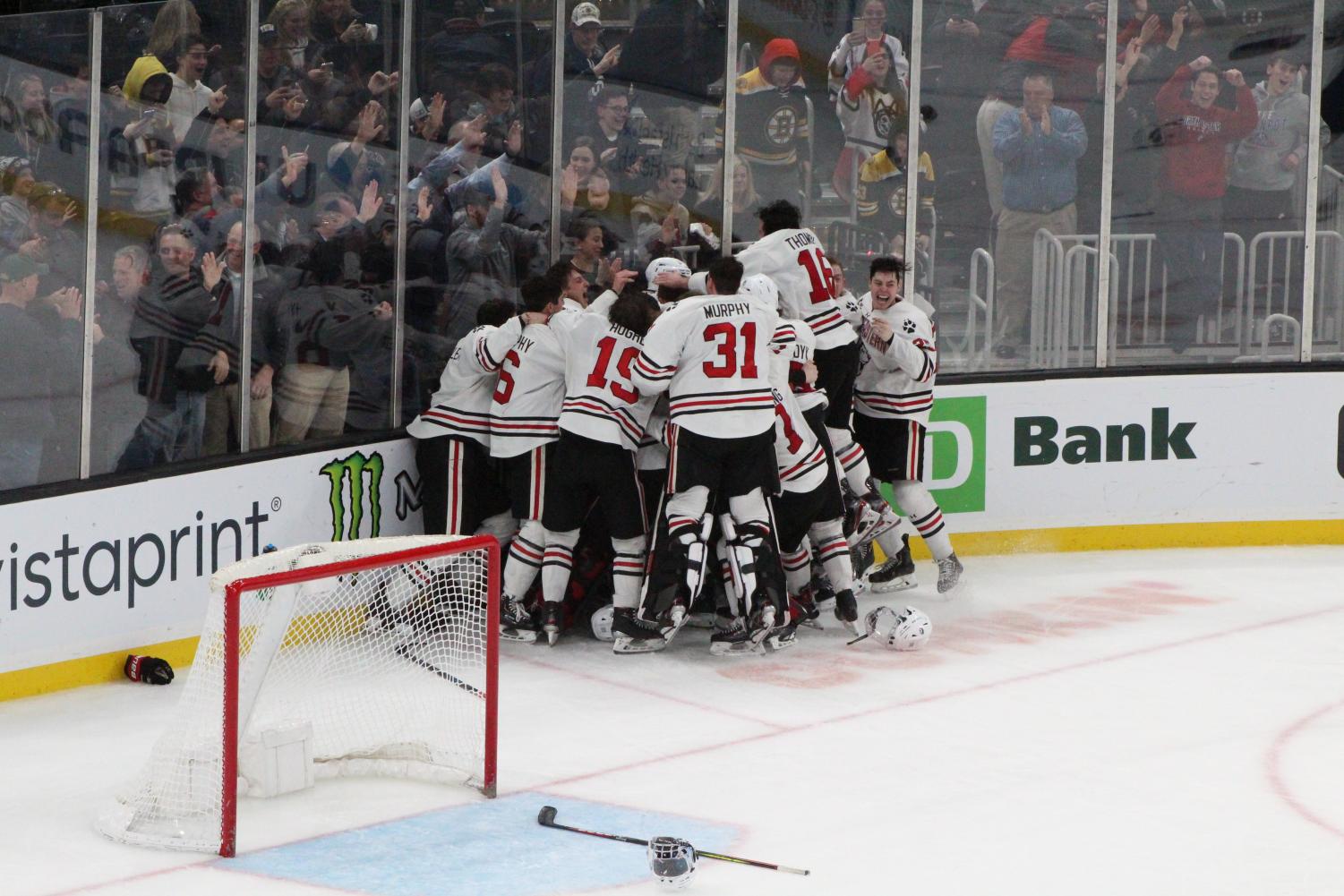 Over the decades, the Beanpot, which occurs on the first two Monday nights of February, has become cemented as a hockey tradition in the Boston community. (Sarah Olender)

Over the decades, the Beanpot, which occurs on the first two Monday nights of February, has become cemented as a hockey tradition in the Boston community.

The Beanpot: What it means to the Boston hockey community and beyond

During the first and second Monday of February every year, TD Garden is filled with a vibrant crowd supporting the four schools that compete in the annual Beanpot, a tournament where records and rankings are thrown out the window and any team could bring home the win.

This year, however, the arena will remain empty.

“The four schools support it; our student body, as you know, supports it tremendously; our alumni support it, and the city of Boston supports it. Socially, everyone likes to go to the Beanpot. It’s a tradition for many people to go to the first two Mondays in February,” said Jim Madigan, head coach of the men’s hockey team at Northeastern. “So for it to not happen is sad, it’s disappointing, but it’s understandable.”

“[The Beanpot] is part of the fabric of Boston,” Madigan said. “From an athletic perspective first but also from a social component.”

The tournament, which was originally named the New England Invitational Hockey Tournament, was first played in 1952 at the Boston Arena (now the Matthews Arena at Northeastern University) and did not have the same significance as it does now. The first game was not even played in the usual month of February, but Dec. 26 and 27, where Harvard University took home the title.

Jack Grinold, former Northeastern sports information director, said the initial tournament was created out of convenience and to ramp up their ticket sales. The four schools all used to play their games at the Boston Arena, and when they would compete against one another, there was significantly more support at the games. As a result, Walter Brown, founder of the Boston Celtics and manager of the Boston Garden, birthed this tournament.

However, over time, the Beanpot has become cemented as a city tradition for many of those who live in the Greater Boston area. Like opening day at Fenway Park, the July 4 Esplanade fireworks and the December Holiday Pops at Symphony Hall, the beginning of February marks the few days of college hockey excitement in  Boston.

“It may not be significant maybe in the grand scheme of things in terms of Boston pro sports … But then when you really get it down to the grassroots level of the families and the kids and the parents all making a significant investment into the Beanpot, I think that’s why ultimately, it has some resonance,” said Fluto Shinzawa, a senior writer for the Athletic, who has been covering the Boston Bruins since 2006.

Last year, a record-breaking crowd of 17,850 people attended the men’s Beanpot at the TD Garden. Especially for high school hockey players, it holds significance to be able to watch players who are only just a few years older than them play in the Bruins’ arena.

“In my opinion, for high school hockey players, it’s like the Super Bowl,” said John Flaherty, head coach of the BC High School men’s hockey team. “We’ve had a lot of BC High hockey players go on and play in the Beanpot. So, obviously it’s very good hockey and it’s a great tournament atmosphere, but also it means a lot for us to see guys that wore [BC High] uniforms play down there.”

Last year’s Beanpot, especially, was one for the books for BC High as the arena watched former Northeastern captain and BC high alum Ryan Shea lift the Beanpot cup after their win over Boston University. Over the decades, local high schools have continued to send some of their best players to these four schools in hopes of watching them compete in the Beanpot, as well as other college tournaments and eventually join the realm of professional ice hockey.

On a different level, the Beanpot also captures the attention of professional players and teams. Not only are the men’s games played on the Bruins’ home ice, but local players of the Bruins understand the importance of the tournament.

From an operations perspective, it also ranks high within the tournaments that college players get recruited at.

“[The Bruins have] been invested in the Beanpot because they view it as an important game and they want to see how their prospects perform in big pressure, big moment situations,” Shinzawa said.

Players that have competed in the Beanpot and have been drafted to the Bruins include former Northeastern players Matt Benning, Matt Filipe, former Harvard player Ryan Donato and former BU players Charlie Coyle, Matt Grzelyck and Charlie McAvoy.

For the Beanpot to not happen this year is a first in the tournaments’ history. The finals of the 1978 Beanpot was postponed after the Blizzard of ‘78 hit the Garden, leaving some fans and those in attendance stuck overnight in the arena, but was not canceled. But with COVID-19, many tournaments that fans have looked forward to in the year have been canceled. The 69th Beanpot is scheduled to be held next year instead, according to the TD Garden.