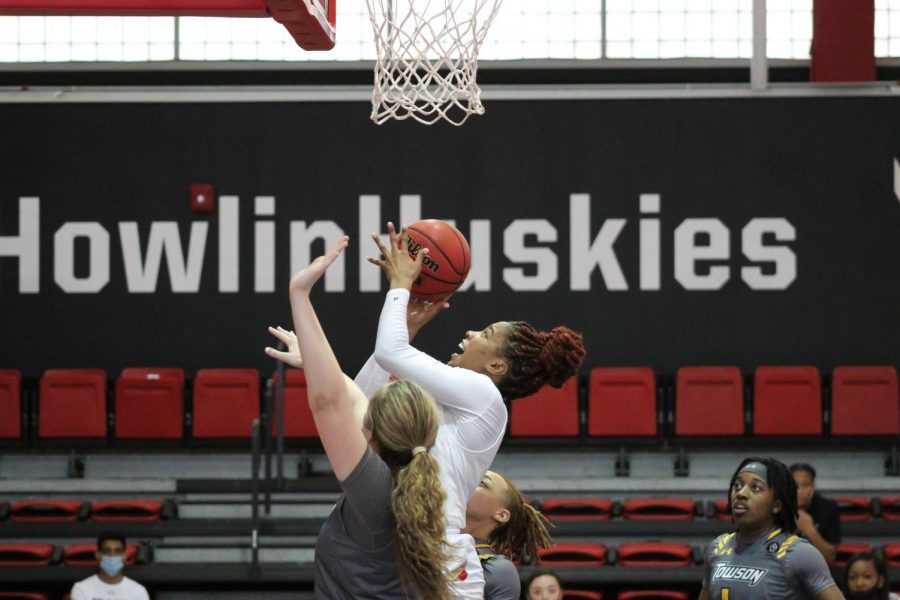 It was a rough afternoon for the Huskies, who couldn't contain Towson after halftime.

Although they had the lead at the half, the Huskies found themselves with a five-game losing streak after a Saturday loss to Towson University, 90-69. Towson (11-3, 6-1 CAA) was the team that NU (3-11, 2-9 CAA) was supposed to compete against in the 2020 CAA quarterfinals when the COVID-19 pandemic forced the tournament to be canceled.

“If we want a different output then we need a little different input,” said head coach Kelly Cole in her pre-game interview. “We’re doing a lot of really good things with the kids that we have and we’ve been competitive, just not enough.”

The opening minutes of the contest didn’t fare too well for NU as Towson went on a 10-0 run over the first three minutes of the game with junior guard Kendall Currence sinking a triple to put the Huskies on the scoreboard. Graduate student Ayanna Dublin read the errant pass by a Towson player to steal the rock and convert the layup at the other end of the court, bringing the Tigers’ 17-16 lead to within a point. Despite a rocky start, the Huskies battled back to end the frame up 24-20.

Currence hit her fourth triple of the game to start the second quarter. Freshman forward Leyla Öztürk achieved her first career double-digit scoring game within 12 minutes of the game to help the NU effort, and the Huskies went into the break in the green, leading 38-35.

While freshman guard Maddie Vizza broke the tie with a triple, 43-40, the Tigers picked up a 6-0 run to regain the lead they lost in the first frame. Senior guard Stella Clark sunk the deep three for NU as they ended the third quarter down by six points, 59-53.

The Huskies needed an explosive final ten minutes of play, but the Tigers had one last surge up their sleeve with a 31-point final quarter, leaving the Huskies in the dust and with another loss.

“For about 30 minutes we did what we needed to do. Unfortunately, it’s a 40 minute game and when they [Towson] took advantage when we let up, they ran with it,” Cole said. “We know what worked and tomorrow we have to stick it out and play 40 minutes of it.”

Clark is now 27 points away from becoming the 23rd member to join Northeastern’s 1000-point scoring club as well as make her projected 100th appearance for tomorrow’s game at noon.

With William & Mary (6-7, 3-5 CAA) deciding to opt-out from the remainder of their 2020-21 season, Northeastern will now be celebrating Senior Day in their last home series weekend against Towson.

As NU continues to continue the social justice conversation as well as celebrate Black History Month, these last two home games are dedicated to Tina Marie Davis and Daniel Prude.